Lesson 5. All alone a Dog with out a bone

This week was another adventure and this time I was truly left to fend for myself. As I had managed quite fairly only watching the recorded lessons, I thought I’d continue with the same strategy. Why change something that isn’t broken? To my horror however the recordings hadn’t been uploaded to moodle. No matter – I continued only using the written guide and low and behold it turned out okay! It wasn’t as interesting and comprehensive as the lessons, but it turned out just fine this as well.

So, this week’s theme has been mathematical analysis and especially using the buffer zone tool. The buffer tool is used to examine a phenomenon within a buffer zone, this be a radius from a point, road or place. I applied this method to various tasks, counting residents living near roads leading to the town centre of Pornainen, inhabitants near airports and train/metro stations and school related data about inhabitants near schools. The focus of this week has been more on analysing data than on visualising it through maps and hence I have produced a set of tables and diagrams instead of a plethora of interesting and nice-looking maps.

Table 1. The table describes the amount of people within various radiuses from either Vantaa-Helsinki- or Malm’s Airport. It also displays how many are affected by high decibel values as a result from air traffic.

Looking at Henrietta Nyström’s (Nyström 2021) and Sanna Janttunen’s (Janttunen 2021) blogs I noticed that our numbers differ somewhat. Nyström seems to have noticed the same thing and figures it has to do with the specific tools and preferences that one has selected. This might very well be true.

Table 2. The table describes the amount of people inside a 500m radius of train stations as well as looking at the proportion of working aged people within this radius.

As can be seen from table 2. the vast majority of people living within a 500m radius of the a station belongs to the working age group. This is probably due to the ease of transport when using the metro or train. This is something that is very attractive to this particular age group. One should note that 69% seems very high, but this is due to the vast majority of people overall belong to this age group and hence this isn’t truly that high of a number. It would be interesting to look at the difference between the proportion of people within the working age group within and outside of the buffer zone. This number would surely be much lower, but there would probably still be variations although not as high as 69%.

Picture 1. The Diagram displays some numbers on the population in Vantaa. 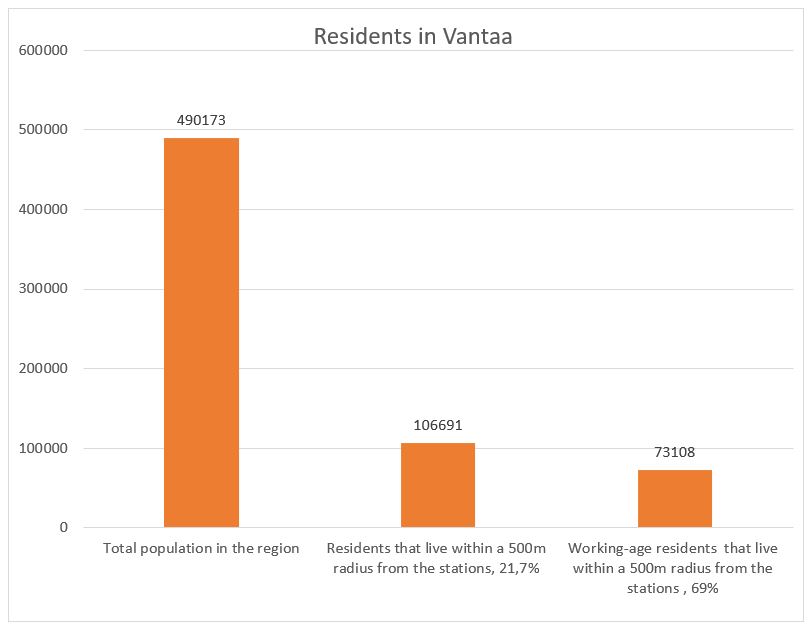 Table 3. The table shows the amount of people living in urban/rural areas in Vantaa

The next assignment concerns the population of Vantaa and if they live in urban or rural areas. The proportion of children in these areas is also looked at. As can be seen in the table the vast majority lives within urban areas and this counts for the children as well. The reason behind urban areas being so much more popular drives down to these having more services and better transport.

Picture 2. The diagram displays various numbers on the population of Vantaa. 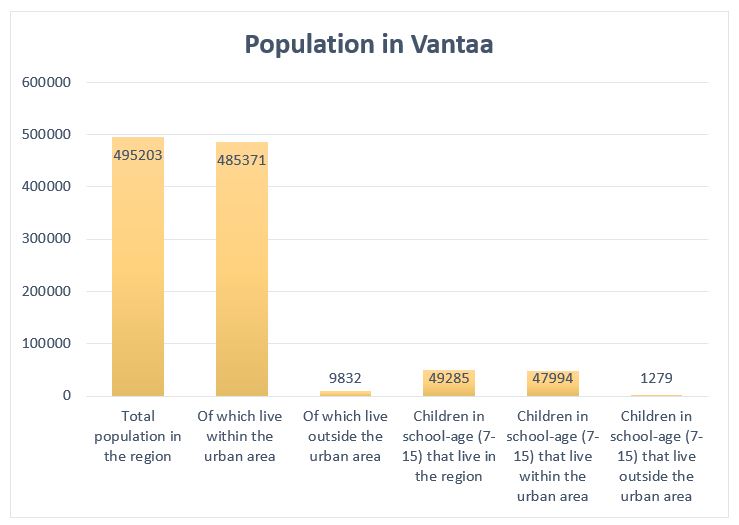 For the last assignment this week wo got to choose between a set of exercises. I chose to use to buffer zone tool to look at amounts of children within a buffer zone of Helsinki Yhtenäiskoulu in Käpylä, Helsinki. To me this was by far the hardest of the exercises as I struggled both with data related parts as well as the technical side of things. Eventually I did succeed and below you can see in table 4. the new found data.

Table 4. The table shows residents and children within the

I couldn’t leave you without a weekly map now could I? so finally after completing these exercises I decided I wanted to visualize the last exercise as a map. I used a plug in called Quick map services to load the OSM Standard Map as the background map to load a preexisting map of Helsinki to my project and then layered upon in the borders of Helsinki Yhtenäiskoulu’s school district and dots for all households that have children within school age. The result is the following map:

Picture 3. The map shows the households with children within school age within the borders of the school district of Helsinki Yhtenäiskoulu. 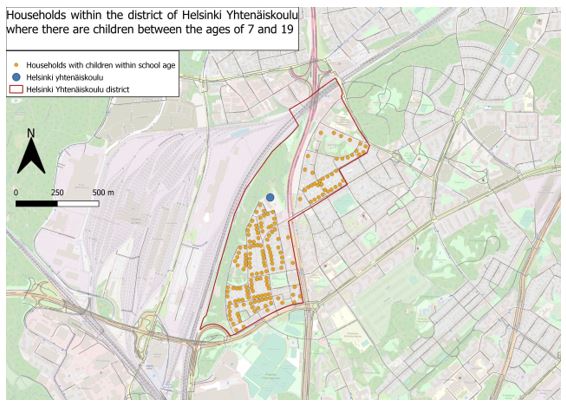 Usually I have always had the recorded lessons as a detailed guide to the exercises, but this week was different. As I had missed the lesson and there was no recording I had to manage with only the written guide. In hopes of Arttu uploading the recorded lesson to moodle I procrastinated finishing this week’s exercises until today. Today though I had to make the executive decision of going forward on my own. It worked out fine. I still hope that the lessons will be recorded in the future. For it is the future or youtube will outperform universities in a few years. At least on flexibility and availability.