To develop a tool that recognises hate speech based on a cumulative database of hate speech cases. The database will contain cases of different kinds of hate speech (e.g. hatred based on ethnic background, sexual orientation or gender identity, religion or disability). The more the programme knows, the better it recognises new cases. 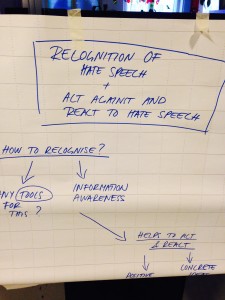 Are you satisfied with the architectural choices your group made for the software?

No, because there were issues getting jsp working locally. We had to go with the java app to listen on a socket and receive the data via the latter. Then, we had to send the post requests from the website to a php script and then send the data to the main program via a socket connection. The initial idea was to make it as a standard webapp and deploy it to heroku.