The international closing conference on the Legal Transplant for Innovation and Creativity ? China and the Evolution of IP Norms was held in Helsinki during the first week of December.
Distinguished guest flew over from China, Germany, United States, and Germany to attend the conference and discuss pressing topics ranging from information and communication, to traditional knowledge. The presentations and discussions taking place within context of the conference where related to the project findings’ and also future
needs for research brought to the spotlight by the TranSIP project. This awaited closing conference was also to celebrate the upcoming book Governance of Intellectual Property Rights in China and Europe which is one among the several achievements of the TranSIP project. 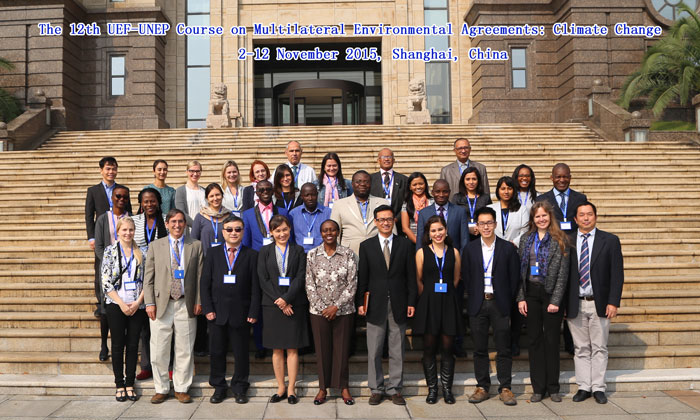 There were 22 participants from 22 countries attending the course, as well as lecturers and resource persons around the world. The total amount of applications to the course was over 270.

The theme of the 2015 Course was climate change. 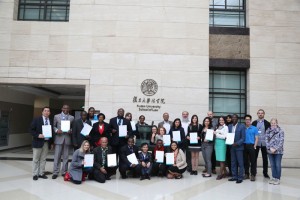 The course covered a broad range of topics related to climate change and multilateral environmental agreements, from climate change mitigation and adaptation to climate finance and technology. A special emphasis was given to the ongoing negotiations under the UN Framework Convention on Climate Change for a new climate agreement. The course also covered general issues relating to international environmental law-making and diplomacy. The two-week training course culminated to a two-day climate negotiation simulation.

Text and pictures by Outi Manninen

We are glad to announce that Lappeenranta University of Technology became the tenth Member of the Finnish Center of Chinese Law and Chinese Legal Culture on 1 July 2015.

Lappeenranta University of Technology (LUT) is a pioneering science university in Finland, bringing together the fields of science and business since 1969. LUT is bringing its unique expertise in energy systems and environmental issues, which will certainly complement this of the other Member Institutions. LUT is also a member of the Nordic Center in Fudan.

As in the case of the other Member Institution, the Center, with the help of the library staff, has made access to ChinaLawInfo available to LUT’s students and staff. Lappeeranta Academic Library designated one computer from which ChinaLawInfo can be accessed. Please refer to the map below to locate the computer: 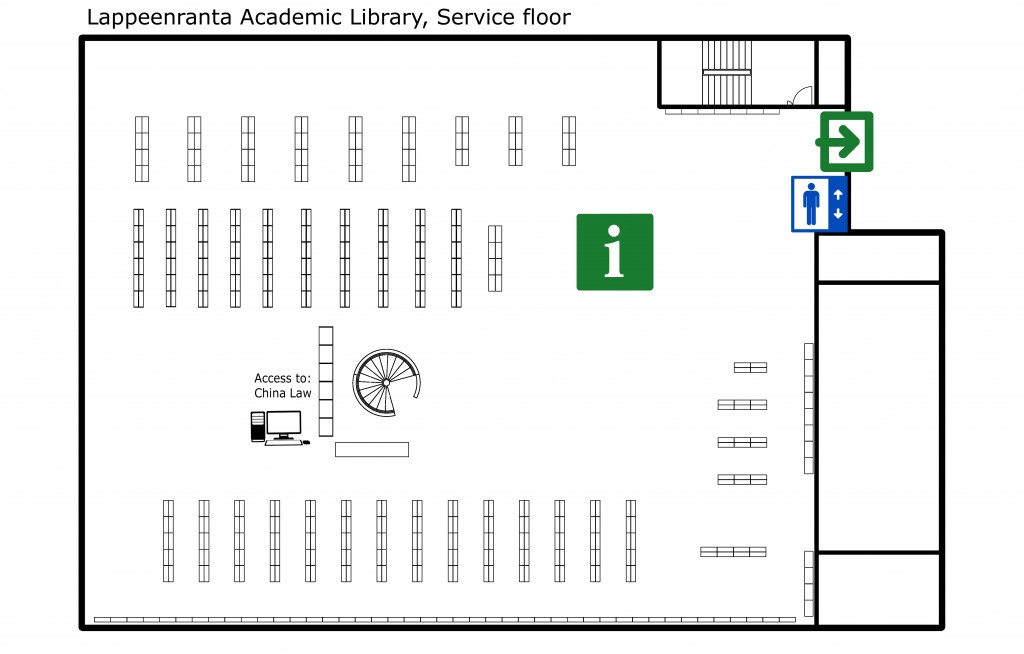 The 7th Bilateral Seminar on Comparative Law took place in Beijing on 6-7 June 2015. Once again, this international seminar created an important platform for Finnish and Chinese legal scholars to discuss Rule of Law and its practical implementation. New legal developments in both countries were presented on specific issues such as labour protection of intra- and interstate migrant workers, equality and non-discrimination based on gender, as well as the role of judiciary.

In her opening address, Professor Ulla Liukkunen, Director of the Finnish Center of Chinese Law and Chinese  Legal Culture, said that it is undeniable that the Sino-Finnish Seminar is now a well-established tradition and  will certainly continue. Likewise, in his closing remarks Professor Xie Zengyi stressed the exceptional  character of the cooperation between Finland and China, which is grounded in real commitment, mutual t  trust, appreciation and understanding. He added as well that the Sino-Finnish experience is a model based on  which the Institute of Law at the Chinese Academy of Social Sciences may develop successful international  cooperation  with other countries.

The collaboration between Finland and CASS, Institute of Law has been uninterrupted since 2009. Its success lies in in-depth academic cooperation that further develops a truly comparative methodology. For the last seven years, Finnish and Chinese legal scholars have met, alternatively in Finland and China, to discuss pressing legal issues, relevant not only to the Finnish and Chinese domestic systems, but also globally. Since 2012, CASS and Finnish Universities are carrying out jointly several research projects on important issues such as employee participation, intellectual property, the arctic question, environmental law and gender issues. Both the seminars and research projects can present tangible outcomes in forms of international publications. Additionally, what has started as cooperation between CASS and its Finnish homologue, the Academy of Finland, has brought together also Finnish key players, as demonstrated by the existence of the Finnish Center of Chinese Law and Chinese Legal Culture, constituted of eight Finnish Universities.

At the occasion of the Seminar, the leaders of the exchange, Professor Li Lin, Dean Kimmo Nuotio and Professor Ulla Liukkunen renewed their commitment to develop further the collaboration and continue Sino-Finnish dialogue on Rule of Law development. 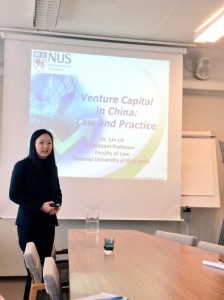 Assistant Professor Lin Lin From the National University of Singapore (NUS) visited the Center in May 2015. Dr. Lin is a Corporate Law scholar specialized in Alternative Investment Vehicles and Chinese Commercial Law. During her stay, Prof. Lin gave a guest lecture on Venture Capital law and practice in China, during which she introduced the law and practices of venture capital in the context of China. She presented as well how China has created a vibrant venture capital market over the past thirty years, particularly by providing capital, creating specialized investment vehicles, and encouraging innovation and entrepreneurship. Lastly, the role of Chinese government in the development of the sector, the regulatory framework governing venture capital, the peculiar legal  and institutional problems within the Chinese venture capital cycle, as well as the legal solutions to these problems were discussed.

The lecture was attended by researchers as well as students from the University of Helsinki and Aalto University, who showed high interest and knowledge in the topic during a prolonged discussion session following the lecture.

The second seminar organized by the Academy of Finland Research Project ‘Employee Participation and Collective Bargaining in the Era of Globalization – Nordic and Chinese Perspectives’ gave a unique opportunity to labour law and company law scholars to jointly discuss issues of Corporate Governance and the role of Employees in it. The seminar “Who are the Stakeholders? Comparative Perspectives on Corporate Governance and Employees’ Role in the Corporation“, held on 7-8 May 2015 in Helsinki was co-organized with the Faculty of Law at the University of Turku.

The idea behind the seminar was to bring together the perspective of company law scholars and labour law scholars to reach a more comprehensive understanding of the reality and complexity of issues related to corporate governance and employee participation. Such event was surely needed as speakers, coming from various European countries, United States and China, underlined the importance of a holistic approach to the tackled issues and called for more interconnection between company law and labour law perspectives.

The seminar took place in a friendly atmosphere and the mutual respect enabled a genuine exchange of ideas. The insightful presentations gave a great starting point for lively and fruitful discussion that engaged not only speakers but also the audience constituted of scholars and practitioners.

May it be prosper and filled with good health! 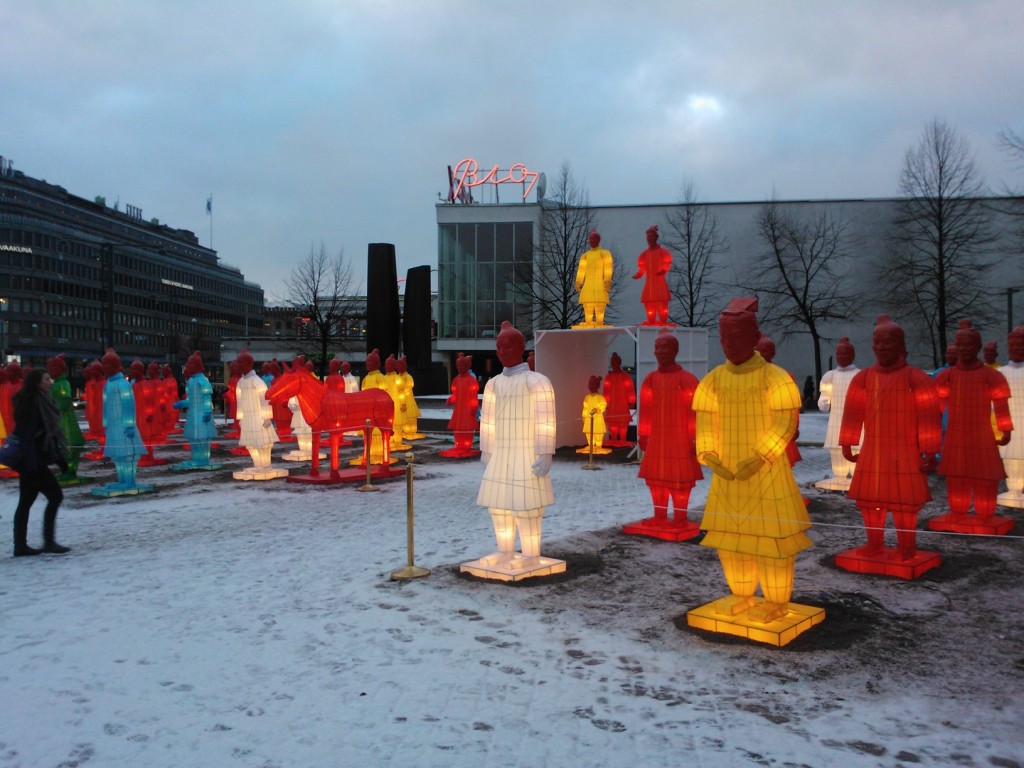 China IP Day III took place at the Finnish Embassy residence in Beijing on 17 December 2014. It was the third event that TransIP research project arranged to help the  European community understand the IP landscape in China.

The event consisted of two panel sessions. In the first session, titled ‘IP law reform and innovation strategy in China’, the panelists gave speeches on current IP law reform in China. Prof. Weiguang Wu from Tsinghua University briefly recalled the history of IP legislation in China. He argued that China is experiencing the transformation from a power-regulated IP system to a right-regulated IP system. In the future, a more right-oriented IP system would be established in China. After him, Prof. Yuying Guan from CASS offered an overview on current IP law reform in China. She picked up some important IP issues such as punitive damages in China and remarked on the solutions for the issue in relevant IP law proposals or newly adopted IP laws. The third speaker, Prof. Peter Yu from Drake Law School explained the drivers of IP system in China. He also offered some suggestions for foreign companies on setting IP strategies in China. Lastly, Mr. Dan du’Homme gave the audience insights on the hot disputes such as patent subsidies, service inventions in China and how IP key project assists the government to make its policies concerning these issues. After these four speeches, Prof. Niklas Bruun chaired the panel discussion. All speakers showed their optimistic attitude toward the IP system in China. They believe that the IP system in China will be better in the future thanks to the growing demand from domestic industries.

The second panel session focused on the establishment of specialized IP courts in China. In this session, first Prof. Mingde Li explained the reasons to establish IP specialized courts, their jurisdiction and their functions. Then Judge Jiang Ying from Beijing IP court presented the organization, operation and the judicial design of these special IP courts, as well as the future function of the courts.  The third speaker, Ms. Xi Chen from State Intellectual Property Office (SIPO) discussed the Specialized IP courts from the perspective of an examiner. She pointed out some conflicting rules in the patent prosecution and in the patent litigation. She hoped that the rules will be more consistent and will offer more legal certainty for examiners and applicants through the decisions of the specialized IP courts. Lastly, Mr. Zhenhua Ni from King & Wood, expressed the expectations he holds from  the specialized IP courts. He pointed out his dissatisfaction with some element of the current legal litigation such as the low-awarded compensation for the damage and the local protectionism. He hoped that the IP courts can at least solve some of these issues.

In the end, Mr. Mikko Puhakka from Lion partners offered some suggestions for both domestic and international companies on dealing with IP issues based on his experience as a venture capital based in China for more than 5 years.

Together with Finnish Embassy in Beijing, the project group happily saw more than 40 people, both from China and EU, attending this small event. As the audience express their appreciation to the organizers,  the TRANSIP project will certainly arrange more seminars and workshops in the future to serve the need of the European, and  especially Finnish, business community.

Authors: Yajie Zhao and He Kan 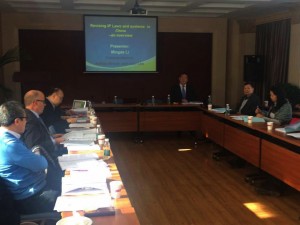 TransIP project’s researchers gathered at the CASS, Institute of Law, to attended the closed workshop: ‘Governance of IP in China and EU’ held on 15-16 December 2014. It was a great honour for the project members to invite Professor Peter Yu to comment on the articles written by them.

In this workshop, each researcher presented his or her article that will constitute a contribution to the edited volume  IP and Governance in EU and China, to be  published by Edward Elgar in the forthcoming year. Each article received comments from two commentators. Additionally, all researchers in the group were free to express their opinions on the article.

After this workshop, it is believed that the book will attract the interests of academic circles as well as practitioners.

Authors: Yajie Zhao and He Kan