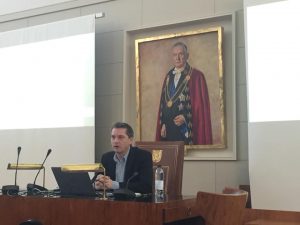 China’s economy and influence in global governance has increased exponentially over the last decade. The effects of the expansion are manifold. However, it is how China is managing those domestic and global effects, which has been object of study by both scholars and policymakers in many countries. To discuss the evolution of China’s model of domestic and global governance, the University of Helsinki held an international conference on the theme: Chinese Model of Governance on March 20, 2018. Presenters at the conference comprised of junior and senior scholars from China, Sweden, Zimbabwe, UK, the United States, Ireland and Italy.

Professor Julie Wen-Chen of the University of Helsinki gave the opening remarks. Talking about consultative democracy, that is, how the government interacts with the society in order to make policy decisions, Professor Oscar Almén, from the Uppsala University of Sweden pointed out the diversity in China’s system of governance in provinces. He argued that the diversity of governance models within China encourages local government innovation.

Apart from central government-local government relations, the state’s connection and interaction with the common people stands at the base of China’s policy programme. As pointed out by Professor Zhongyuang Wang of Fudan University, the legitimacy and vitality of all kind of political regimes are based on a strong connection with the people. The Chinese government has been at the forefront of connecting with the people – websites and apps on smartphones that inform the citizens and keep them in contact with the party are available. The link with common people is fundamental for the legitimacy of the party, it is vital for safeguarding social stability. 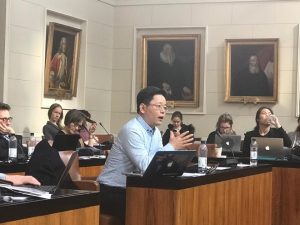 The Chinese government applies different policies in different regions, depending on their differentiated needs. For example in the poor region of Guangxi, the government is trying to help poor people in order to establish a strong welfare. Social entrepreneurship and businesses are also playing a part in solving societal challenges, such as, environmental protection, education, and disaster relief. China relies on entrepreneurs and social organizations to provide some public goods, Costantin Holzer, a Lecturer in Chinese Business at the University of Cork explained. He further explained that the Chinese government regards private entrepreneurs as a “strategic group”.

Following the new policies of economic stability, the so-called New Normal, the party is trying to accelerate economic innovation by financing start-up incubators and entrepreneurs. As explained by Coleman Mahler, PhD student at the University of California, Berkeley, the Communist Party is financing new and innovative entrepreneurs. This, he argued, is based on a system of propaganda deeply rooted in and inspired by Mao’s Era. It is, therefore aimed at creating a stability by suppressing dissenting groups and promoting potentially friendly ones. In this way, start-up incubators are not only places where one can gain personal success or do good for the nation, but also a place for the moral cultivation in respect to the party’s principles.

Moving on to China’s policies of social administration, PhD student Hua Li from the University of Zhejiang discussed how social work is managed and its main functions. Hua Li explained how in the past years. Social work has been integrated in local governance, especially in Beijing, Guangdong or Chongqing. She argued that provincial governments’ collaboration with NGOs and the community is strongly promoted to make the social workers organizers of social administration, or in the poorest areas of the country where its function is strictly linked to promoting national unity.

Social stability seems to be one of the key points of Chinese government during the Big Data era. Currently, a national widespread social credit system, a graded reputation system is in the process of being established and will be implemented over the next years. The system will rate all citizens based on: their social and economic status, problems with the law etc. Adam Knight, a graduate student at Oxford University compared it to the dystopic novel of George Orwell 1984 and to the most recent TV series Black Mirror. However, the implementation of this kind of system could be in violation of basic human rights and privacy of the citizens.

Riccardo Berti and Mariagrazia Semprebon, who are lawyers in Italy, identified managing pollution as a major governance challenge for China. They explained how resolving this problem seem to be one of the principal aspects of Xi Jinping’s policy, and that he is trying to inspire a general interest among the people about respecting the environment. Laws against pollution and polluters are currently being set up, and are aimed at obliging polluters to restore the environment or pay a high fine. Although the laws are still in the early stages of implementation, there are already several vocal critics of the laws.

Natalie Ruvimbo Hodzi, a PhD student at the University of Helsinki gave a different perspective to the influence of China’s model governance on African countries. She argued that China is extending its influence in African countries, mainly, through its financial resources. By emphasising on the right of each country to determine its development path, and engage other countries based on mutual benefit, China seems to encourage a strong development state in Africa. The result in countries like Zimbabwe has been opposition to China’s projects and allegations that China may encourage election rigging, threat of political and civil rights and reinforce of authoritarianism system.

At the end of the conference, Professor Zhongyuan Wang and Professor Oscar Almén discussed the necessity of more relationships between Western universities and Chinese universities in order to gain more data on the Chinese society and to improve China related studies and research.

This report is written by Vittorio Santoro.