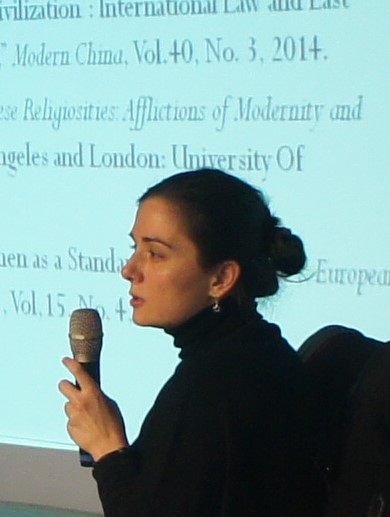 “Nobody knows anything about China, including the Chinese government,” wrote in a uniquely sobering text James Palmer, Beijing-Based Asia Editor at a major American magazine Foreign Policy. Yet, the colossal amount of media popularized information, scholarly analysis, and policy recommendations make us think that we do. This talk will approach English-language media space as a main site of global public pedagogy which creates and disseminates a particular set of information and an implicit and explicit set of interpretations of “the situation in China”. It will look closely into some of the globally most influential anglophone media outlets, and analyze visual and textual narratives about China produced and disseminated in June 1989 and in June 2019. Questions which will be raised and discussed in this talk are: What can the observed media space tells us about the main agents – individuals and institutions – that assume the roles of producers of globally authoritative knowledge on China? What may be said about the roles that 1989 student demonstrations play in global affective and epistemological engagements with China? What can be concluded about broader global geopolitical, economic and ideological struggles if we analyze English-language media narratives about China in 1989 and 2019?

Dusica Ristivojevic is Kone Foundation Bold Initiatives Researcher at the Department of Cultures, University of Helsinki. Before moving to Helsinki, she worked as a lecturer in International Development at Dong-A University, South Korea, a lecturer in Gender Studies at the Central European University, Hungary, and as a Postdoctoral Researcher at the Institute of Modern History, Academia Sinica, Taiwan. Dusica’s research and publications bring together the areas of interdisciplinary Chinese studies, media studies, gender studies and international relations. Her teaching record include courses on history and politics of knowledge production, media and democratization, politics of human rights, as well as more recent courses on decolonization and feminism.