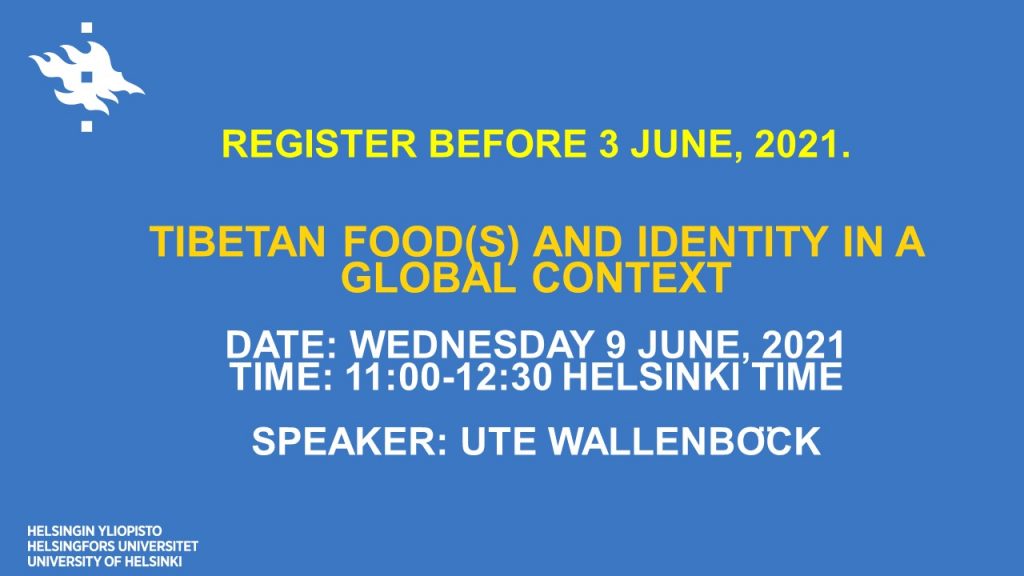 Format: Online (Registered participants will get link to the event 1 day before)

My current research deals with the cultural aspects of Tibetan foods and beverages since I argue that everyday foods illustrate cultural identity: Food(s) are vehicles for expressing culture. In course of my past project on the construction of the collective identity of the Tibeto-Mongol population in the contemporary Henan Mongol Autonomous County in Qinghai province, I have gained a lot of experiences in nomadic food culture and “traditional” cooking. I learned that traditional foods are connected to Tibetans’ socio-cultural, ecological, spiritual life, and health. And moreover, some foods are culturally important in various festivals and ceremonies. Subsequently, I have lately been discussing the use of ingredients in the various cuisines with a Swiss Tibetan chef de cuisine and started enhancing transdisciplinary dialogues on food culture(s) as many scholars have so far been occupied by analysis of specific aspects of a given food culture, but they failed to acknowledge the phenomenon of the effects of cultural transmission on the emergence and diffusion of innovation of semi-nomadic food(s) into the “sedentary” European culinary world. By discussing the role food and food-making play in identity shaping among the diasporic Tibetans in Switzerland and Austria, in this lecture, I examine how intergenerational and cultural differences in the diaspora can influence the “traditional” food(s). Moreover, I am investigating the adaption of ingredients, seasonings, as well as cooking techniques in the Tibetan cuisine.

Ute Wallenböck is currently assistant professor for Chinese Studies at Masaryk University, Brno, and a postdoctoral researcher for the EU-funded “Sinophone Borderlands — Interaction at the Edges” project at Palacký University Olomouc, both in the Czech Republic. Trained as a Sinologist and Tibetologist, she holds a Ph.D. in Chinese Studies from the University of Vienna and a further degree in social pedagogy. Besides her expertise on the Tibeto-Mongol interface at the Sino-Tibetan borderlands and on China’s ethnic minorities, her research interests also lie at the intersection of borders, identity, migration, and cultural transfer in the context of globalizing China. In addition to various peer-reviewed articles, she is the author of the book Die Bevölkerung am Sino-Tibetischen Grenzgebiet. Identitätskonstruktion der Tibet- Mongolen (The Population along the Sino-Tibetan Borderland: Identity Construction of the Tibet-Mongols) (2019).