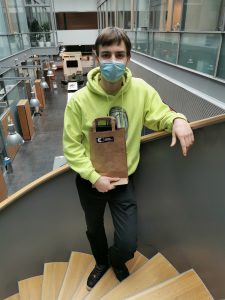 I started working at the University of Helsinki and also at Climate University, in August 2019 as a civil servant. My job was to produce video material for online courses, among other things as well.

In the beginning I felt a bit lost. I had never worked in an office environment before. My days were filled with watching tutorial videos for my video editing software and navigating around the university both online and literally. After a month of working at the university I went on a month-long bus trip in Eastern-Europe with my friends. It was marvellous and returned to work with a clearer mind.

In November 2019 I attended my first Climate University workshop at Metropolia UAS. In the workshop we launched an idea of a #ClimateChallenge campaign, where the workshop attendees could challenge any individual or organisation to take a specific action against climate change. We received positive feedback from the challengers and decided to continue the filming of these challenges in the upcoming workshops. And so we did. In early March 2020 at Aalto University’s workshop (just before the first COVID-19 restrictions) we filmed more challenges. After Aalto, all of the remaining three workshops were online, but this didn’t stop us from filming the challenges. During my time at Climate University I filmed and sent 29 amazing challenges to various different organisations and individuals. Thank you everyone who contributed to the making of these challenges!

My other major task at Climate University has been the production and coordination of videos for the new Climate University courses, Sustainable.now and SystemsChange.now. During autumn of 2019 I was more invested in tasks regarding the courses of University of Helsinki, but in early 2020 I started to work on the Climate University course videos. We decided to make these videos with Unigrafia, which turned out to be a great decision. First I planed the videos with the course teachers and developers. They came up with the topics and the potential speakers. Then we all had a few meetings together with Heikki and Lauri from Unigrafia, where the course developers could ask questions and give their ideas for the videos. Then I started to contact the speakers and searched for locations for filming. I was able to make a schedule for the filming of the videos right before midsummer. Everything stood still during July, but things started rolling again in August. We filmed the videos with Lauri and Heikki during September and October. On set Heikki and Lauri took care of the technical side, while I instructed the speakers and asked the questions for the interviews. All of the speakers were excellent, which made the post-production much easier. Heikki and Lauri edited the videos and I gave my creative opinions and told them what should be fixed. We were supposed to get all of the videos on YouTube before the final Climate University workshop on 9th December. I worked long days and we were able to get most of the videos online on time. The rest of them were put up there before Christmas. For the first months of 2021 I have been fine-tuning Climate University’s YouTube channel so that everything is visually pleasing and in a unified format. I think the videos and the channel turned out very well. It was pleasure to work with Lauri and Heikki from Unigrafia as well as with the speakers and the course developers. The videos will give a fresh addition to the already great courses. I’ll put links to some of my favourite videos below.

On 1st July I officially became a conscious objector. I refused to complete my remaining civil service due to my non-violent beliefs. I had informed everyone at the university about it well beforehand and Laura and my other co-workers supported my decision, which felt great. I was hired to the university for seven more months as a trainee, starting in the beginning of August. I enjoyed a beautiful, sunny July travelling around Finland, visiting my friends and relatives. It was an easygoing month full of swimming and relaxing. It truly was one of the best months of my life. Then in August I returned to work and the following seven months have flown by me just like that. Now it is time to close this chapter in my life and embark upon new experiences.

All in all I have enjoyed working in Climate University. Although, the work hasn’t constantly been super exciting (I don’t think almost any work is), it has been important for me to work for something that truly makes a difference in the world. I have had great co-workers and I have learned a lot about making videos but also about the topics of the videos. I hope that the Climate University materials will spread around the world and I’m proud that I was able to contribute to the creation of them.

What comes next is a bit of a mystery for me, as it is for everyone else as well, because of the pandemic. The first thing I will do with me free time is reading and exercising. I won’t apply to any universities this spring, but I will maybe try to get a summer job. Something physical to balance the 1.5 years of working in an office. Gardener would be nice. What I do know is that I will soon go to jail for the conscious objection. I don’t know specifically what my new address will be and when it’s time for moving day. Luckily this is only a short-time arrangement, since I had so little time left of my service.

A big thank you to everyone who have worked with me during the past 18 months. Let’s all continue working for a sustainable future together!

A more detailed look on the reasons of my objection can be found here (sorry it’s only in Finnish).

Climate University colleagues want to thank Mikael for the good work! You have done a lot in only 18 months, and it has been a pleasure to work with you!