On the cold winter night of January 13, 1888, thirty-tree adventurous men braved a soggy frog to make history. They had assembled at the Cosmos Club in Washington, D.C. to discuss establishing a society that would promote science and exploration – this was the night the National Geographic Society was born.

In less than two weeks the society numbered 165 members and a decision came to be that the new organization was due to have its own magazine, and well, you probably know the rest of the history… The first issue of National Geographic Magazine was published only 9-months after the first meeting, in October 1888 and the yellow border that framed it became forever carved as the most well-known symbol for Adventure, Exploration and Discovery; for the last 125 years the magazine has astonished tens of millions of readers by sharing the vivid accounts of explorers, scientists, photographers and storytellers that have pushed the frontiers of the unknown to “celebrate the world and all that is in it”, the society’s unrelenting mission.

I remember the day that I was first introduced to National Geographic quite clearly. I was about 5 or 6 years old, my father’s friend was moving and he had this enormous pile of National Geographic magazines that he did not want anymore. They had all had magnificent covers and I was nothing less than magnetized by them… When he said that I could have as many as I wished I could not be any happier; I rushed into the pile and started sorting throughout the pages. Had no idea what was written but at that point it did not matter that much, the photos spoke for themselves. They were a window for a world where everything seemed exotic and utterly exciting, I could not get enough of staring at them. Time passed and those first National Geographic magazines I was given more than 20 years ago now share the shelves of my old bedroom with a few others, but my latest addition to the collection, the October 2013 issue is different. It is the one that features the tale of a bunch of tropical ecologists that for more than 2 years now have braved the Amazonian nights to try to unveil the effects of forest fragmentation on neotropical bats – interestingly one of these tropical ecologists is me.

The fourteen-page long article entitled “Amazon – Reborn from the Ashes” was written by my very talented friend Madalena Boto; Madalena did a BSc in Biology in University of Lisbon but soon decided that science per se was not really her fish. She loved cinema and photography and figured out that wildlife filming was more her thing… her first movie (a final project for her MA in Wildlife Documentary Production at the University of Salford) was about one of the rarest European passerines, the Azorean bullfinch, endemic to the mid-Atlantic island of São Miguel, Portugal. After completing her MA she continue working in Portugal as a researcher and camera operator for a twelve episode series on this country’s biodiversity and later on had the opportunity to do some work in Western African archipelago of Bijagós, Guiné-Bissau. This first tropical experience opened her appetite for more and from there to the Amazon was just a tiny step…

We first spoke about the possibility of her joining for fieldwork in late November 2012 and in mid-February 2013 we were already together under the dense canopy of the Central Brazilian Amazon. The first thing to do was to teach her one thing or two about how to catch and handle bats because yes, the main goal of her visit was to photograph (and eventually try to get a National Geographic article) but hands were short on the field and on top of photographing she also had to be able to collaborate with all other day-to-day activities, and those include setting mistnets, identifying bats, recording their echolocation calls, preparing food, setting bat detectors and eventually learning emergency procedures in case anything went not so according to plan. She learned fast and after the first weeks already mastered our research protocols – learning phase terminated we had now more time for photography.

“One picture can say a thousand words”, several pictures can say a lot more! Here’s a sample of her work while in the Amazon: 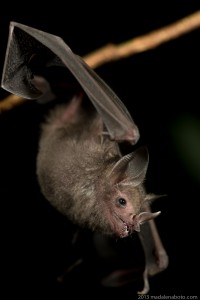 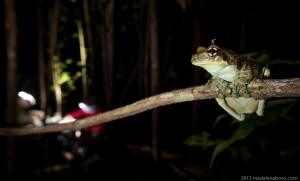 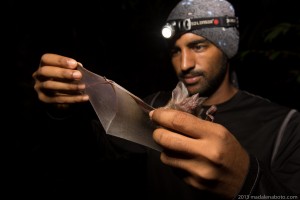 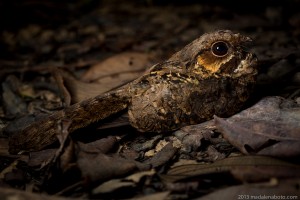 Few other communication channels have been so successful in bridging scientists and the society at large as National Geographic has. In her century and a quarter history the magazine, with her timeless beauty, has informed and inspired millions… now the yellow frame has introduced “my” Amazonian bats to a few thousand readers, could not be happier about it. Many Thanks Madalena!