– Intercultural Education Resources for Erasmus Students and their Teachers (IEREST) is an Erasmus Multilateral Project (2012-2015) which aims at developing an Intercultural Path (a set of teaching modules) to be provided to Erasmus students before, during, and after their experience abroad, in order to encourage learning mobility and to support students in benefiting as much as possible from their international experiences in terms of personal growth and intercultural awareness. (Helsinki took part in the project 2012-2014)

– Perceptions and Constructions of Marginalisation and Belonging in Education: negotiating possibilities for actions and change between pupils and school staff? (PeCMaBE) (funded by the Finnish Academy; PI: Gunilla Holm & Fred Dervin, 2013-2016)

The overall aim of the project is to improve the education of Eastern European Traveller children and Roma children in particular, in primary school (age 5-11) classrooms to effect improved pupil engagement and motivation with the ultimate goal of improved attainment. The project is in response to data concerning persistent gaps in school attendance and the achievement of Gypsy, Roma and Traveller pupils in comparison to national averages across Europe. Given overwhelming research evidence that home language maintenance supports learning, this is the pedagogic approach adopted here to support high quality teaching and learning and to advance inclusion. An innovative combination of two technologies is the chosen medium through which such home language use is initially pursued. However it is also used as a means of explicitly valorizing pupils’ home languages in an effort to raise their status, which research shows supports the overall cognitive development of bilingual pupils. It is widely acknowledged that Roma continue to be victims of racism, intolerance, discrimination and social exclusion sand hence are often reticent to self-identify as Travellers or Roma pin arrival at a new school.. In order to succeed in the overall aim of improved education therefore, the project also aims to develop more open and trusting reciprocal relationships between the children’s parents and schools so that children’s cultural and linguistic backgrounds are made available to schools by parents who trust this information is respected, valorized and used by teachers to improve the educational and social inclusion of their children. 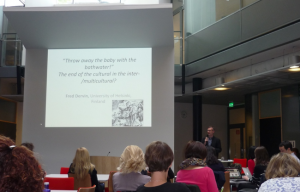