The researchers of the Digital Geography Lab at the University of Helsinki have published spatial data describing the daily rhythms in the population distribution in the Helsinki Metropolitan Area as open data. 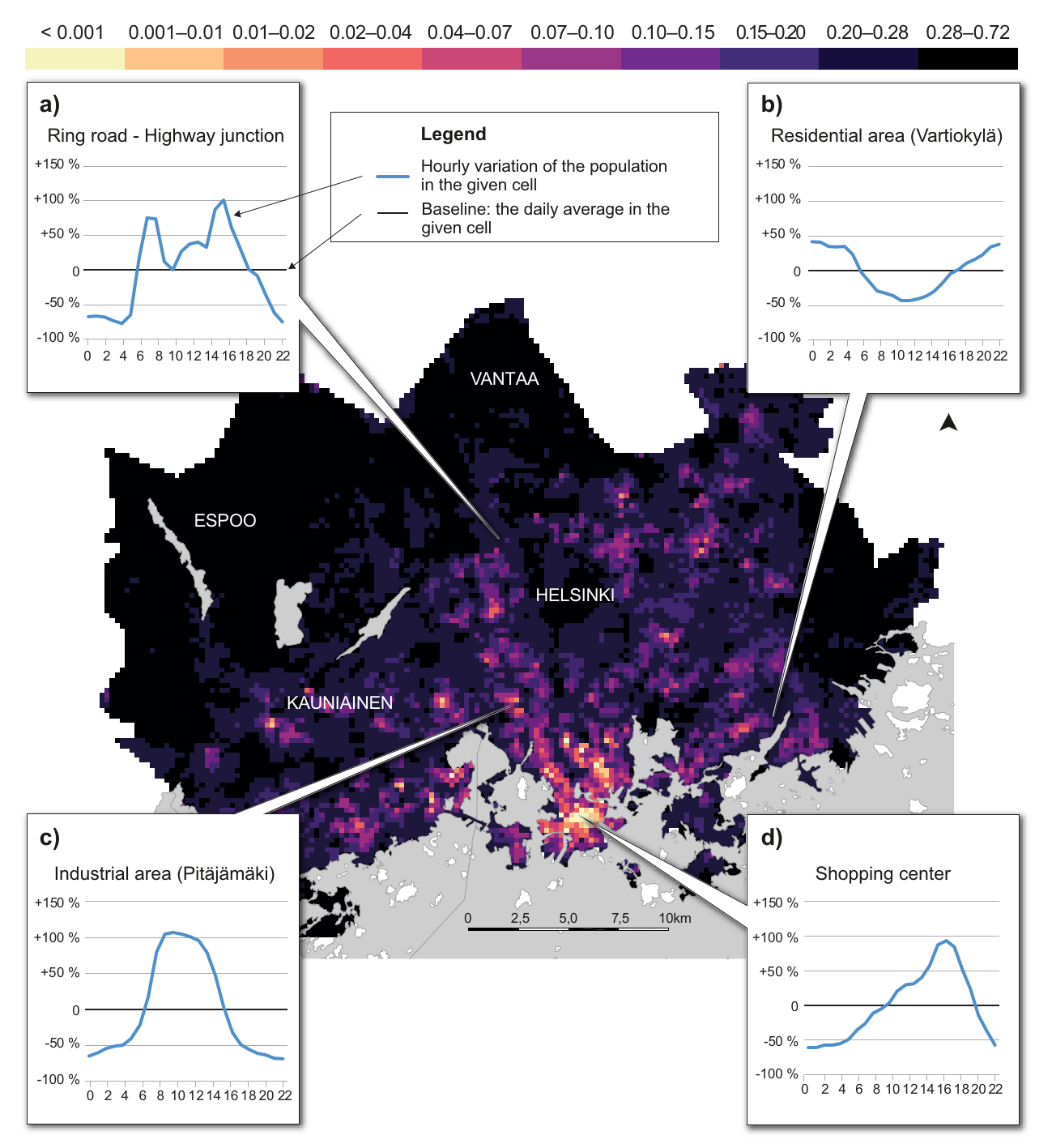 Spatial population distribution in the Helsinki Metropolitan Area between 11-12 AM on a regular workday. The diagrams show the variation of the population in given locations during 24 hours from the daily average. (Bergroth et al. 2022)

Their article in the journal Scientific Data describes how the data set was created based on mobile phone data, and how it can be used. This is one of the first times that detailed dynamic population data is released openly for any city of the world.

The data set is openly available through the Zenodo service, and it shows the population distribution to 250-metre statistical grid cells for each hour in pre-Covid times in the Helsinki Metropolitan Area. The data set enables us to identify concentrations and variations of people, for example for planning services. This data set is among the first of its kind to be published openly. Such exact data sets revealing the dynamic spatial distribution of population are hardly openly available from any other cities in the world.

Finnish scholars and practitioners are accustomed to use one of the most detailed civil register data in the world. However, we also need more information on how people move and what are the diurnal rhythms of the city. Compared to the data collected by social media or sports apps, the locations of people collected by mobile phone companies are the best record of where the population is in reality and at whichever time. “Such dynamic population distribution data could be used for example in planning traffic, health services, and commercial functions, or to develop emergency services,” says Claudia Bergroth, who studied the data for her award-winning Master’s thesis. Currently, Bergroth is working as a researcher in the unit for urban research and statistics at the City of Helsinki.

The mobile phone positioning data collected by mobile network operators can be divided into roughly two groups. The network-based data describes the use of mobile network antennae in the network, whereas device-based data like call detail records connections with a mobile network reveals the locations of each individual SIM card. The data set that has now been published is based on network load. “The source material contains the positioning of each phone, whether they are being used or not. Usually, this vast data set does not record each phone individually, but the data is aggregated to the antenna level, which maintains the privacy of the users. The data set can help us identify the spatial distribution of the population at a given time and analyse the regional dynamics of people,” says Matti Manninen, a doctoral researcher who is working at Elisa Oyj as a data analyst.

The recently published material describes how the population of the Helsinki region is distributed over 250-metre statistical grid cells during each hour of the day. The data is available for both a regular workday (Monday to Thursday) and for both weekend days. The data collected from mobile network at the antenna level has been connected to the statistical squares using a spatial interpolation method developed previously by Olle Järv and Henrikki Tenkanen. The method has been published openly and has been used e.g. in Tallinn, Estonia (link to method description).

The newly published data set reveals a detailed overview on how the concentration of people changes from residential areas to business areas during the day and to recreational areas after work. One of the aspects it shows is that the city centre of Helsinki attracts large numbers in daytime. In contrast, there are also large numbers of people in regional centres and residential areas. Such information on how people relocate during the day can be useful for e.g. planning services based on the actual whereabouts of people. Since the data set was compiled before the event of the Covid pandemic, it also offers us an excellent baseline to study changes in the use of space in different areas during the pandemic.

“This information is important for such things as the planning of services. Though mobile phone data is primarily collected to support mobile phone businesses, they can also help us understand and develop societal functions. For science and transparency, it is especially good that we can publish a dynamic data set openly, while describing how it was made,” says professor Tuuli Toivonen.

This press release was originally published on the University of Helsinki webpage.