In our recent paper published in Applied Geography, we combine travel time modeling with spatial conservation prioritization to identify green areas that best serve the recreational use. We consider equitable access between urban dwellers, the need for various types of parks, and the use of various transport modes. The paper puts together approaches from conservation planning and accessibility research to support land-use planning decisions. 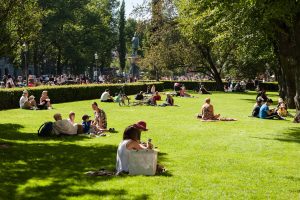 Green areas are important for urban residents. But how to prioritize between them? (Image by Angelo Giordano from Pixabay.com)

A spatial prioritization software Zonation, developed at the University of Helsinki, works as follows: It first takes the full study area under examination and checks how widely-distributed different input features are (be it multiple species, for example). It then takes away a small bit of the area; namely, the bit that corresponds the least to the total biodiversity in the area. Such areas would only harbor few species that are generally widely distributed. Zonation repeats these steps, checking the distributions and removing the least valuable areas, until the entire target area is completely ranked. The prioritization process is based on a ‘Robin Hood algorithm’ that always tries to take away from those species that have the most available areas at the corresponding iteration. This principle of complementarity results in high coverage of protected features compared to more traditional hotspot approach.

What we realized was that this principle applies directly to the goal of maintaining equality in urban greenspace provision!

The importance of green spaces is often measured as the number of people living in the vicinity. Albeit useful for many purposes, this approach misses the fact than a certain park can be the only accessible one for a small number of people and thus irreplaceable at the whole-city level. Zonation and its complementarity-principle, on the other hand, could be used to identify sets of greenspaces that jointly cover maximal recreation possibilities to all urban districts, not just for the most populated ones. Now we only needed some information about how accessible all green areas are from the point of view of all city districts in the Helsinki Metropolitan area… 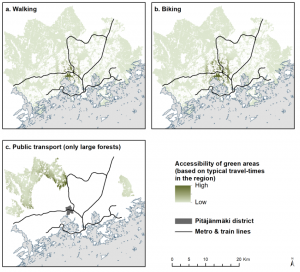 An example of travel time layers: accessibility of urban parks for the residents in the Pitäjänmäki district. Image from the original article.

That information was put into Zonation, and as a result, we got a priority rank map that shows how “critical” different green areas for the balanced, i.e. equitable, provision of accessible greenspaces for every district. 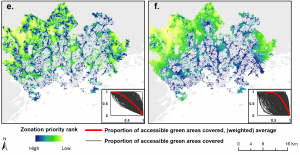 Zonation rank maps. Not only the most central parks are the most important to ensure, but there are important sites at the urban fringe as well. This effect remains even when green areas are weighted according to the population living within the vicinity (right). See the full image in the original article.

This information is very useful for urban planners in the region and offers an important piece in holistic urban prioritizations that balance between e.g. urban biodiversity and recreation possibilities of residents.

Guess what we´ll be doing next 😉

Our codes and Zonation input and output files can be found in Zenodo and GitHub.

Digital Geography Lab is an interdisciplinary research team focusing on spatial Big Data analytics for fair and sustainable societies. We aim to understand spatial interactions between people, and between people and their environment, from local to global scales.