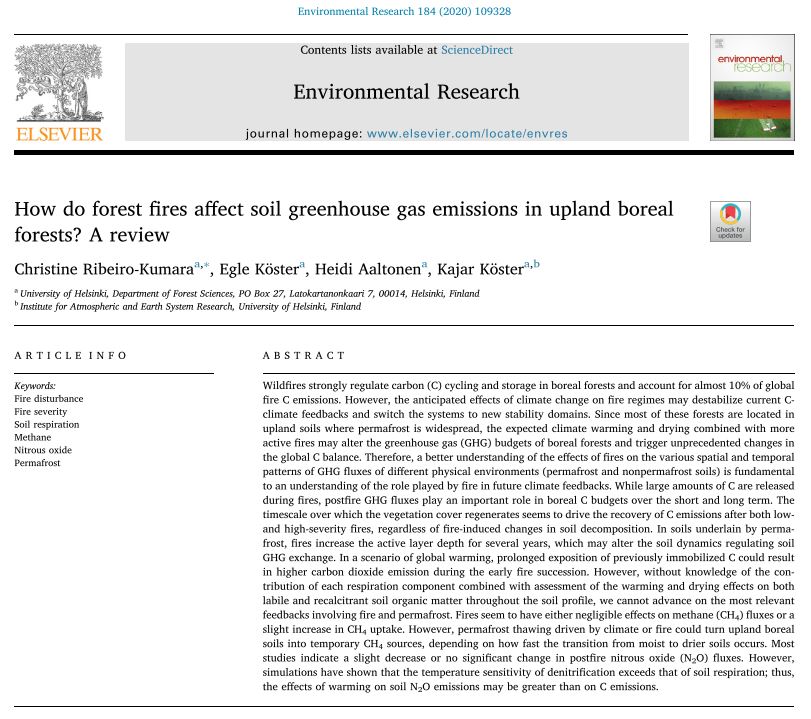 New review paper by Ribeiro-Kumara et al., 2020 focuses on four different standpoints to explore the effects of fire on greenhouse gas (GHG) fluxes in boreal forests: fire severity, time after fire, physical environment, and temperature sensitivity (Q10). High-severity fires have stronger effects on soil CO2 efflux than low-severity fire. Soil CO2 efflux generally increases as a function of time after fire, with the re-establishment of vegetation cover governing the recovery of soil CO2 emissions. Fire effects on soil CO2 emissions in permafrost areas are tightly linked to fire-induced changes in SOM throughout the soil profile. The fire-severity effects on CH4 and N2O fluxes are still uncertain, since very few studies have been conducted after low-severity fires. Upland boreal forests in permafrost and nonpermafrost areas seem to act as CH4 sinks during the fire succession, although a strong trend has not yet been identified. The fire effects on CH4 fluxes may be associated with soil moisture and diffusivity conditions at the time of fire and active layer depth after fire. The direction of the N2O fluxes across a fire succession is still uncertain, while soil temperature is the most studied driver for N2O emissions.