“Your map has no use… We do not recognize the government’s name bloque 22. Our ancestral territory is not an oil block, it’s our life, and these are our words, our crossed spears”
Oswaldo Nenquimo (2019) 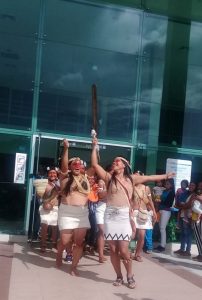 The first reaction of the pekenani (wise elder) representatives of 16 Waorani communities of Pastaza, organized in CONCONAWEP, after the sentence of Judge Pilar Araujo of the Provincial Court of Pastaza that accepted the action for protection and stated that constitutional right of prior, free and informed consultation had been violated, was to dance and sing. The audience hall was flooded by the energy of the Waorani voices and by the dance that drew the glorified dignity. So small was the space that shortly the energy spread to the outskirts; surely that energy connected with its territory, as well as with all the hearts defending the Amazonian life.

The song expressed their historical legacy, the commitment to defend their territory. Repeating “monito ome goronte enamai” (our territory cannot be sold), the song boomed so loud that the response of the state was immediate. Through a statement from the Ministry of Energy and Non-renewable Resources, we knew that there is no truce in this fight, as the colonial state is going to move its state apparatus to reverse the decision of the Provincial Court of Pastaza.

Without respite for hundreds of years we have fought and will continue to do so because we are the owners of the territory. Although the nation-state insists on its homogenizing project and plurinationality is still a declaration, we will continue in our praxis to defend our life systems, delimited by the green horizon that our eyes can see and not by the desktop maps that are drawn from the gloomy offices of obedient and domesticated technicism at the service of the capital.

“Governments have always updated maps without the knowledge of the communities or nationalities who live in the forests. The owners of the territory do not know what the government is doing. Because of [that distrust] we have visited all the communities that have lived with oil, with blocks 16 and 21 that have lived more than 20 years with the oil intervention … we have learned from that. [Therefore] we want to protect the Pastaza forest that has no intervention, has no highway; it is much better to protect this forest, to save it and leave it as a historical legacy for our nationality”.
Oswaldo Nenquimo (2019)

This learning is determinant for humanity. We need to de-alienate ourselves, unlearn and value life proposals built from inspiration and respect for life and not for the profit that benefits the ruling class that sets up anticorruption show while the ‘non-renewable resources’ of a whole country are paradoxically usurped by a corrupt system and will never be recovered again.

To fight is to learn and unlearn; it is to stop being the piece in the machinery of the great global capital that produces mirages at the expense of the death and destruction of our great mother, the earth. It is clear that there are two “political ontologies” (Blaser 2013, 8) that coexist in conflict over the same territorial space, two systems: one of life and the other of death that are fought in an unequal struggle for the same territorial space. It is also clear that we are constructing history minute by minute and in this construction, we need to learn from the past in order to visualize the desired future without bewilderment.