Tomorrow we will have the final HELCATS meeting in the beautiful city of Vienna. HELCATS was a three-year consortium project funded by the European Commission 7th Framework Programme. Eight institutes or universities from seven European countries were involved. The project was led by Richard Harrison from Rutherford Appleton Laboratory, UK. We had monthly telecons, held face-to-face project meetings twice per year and organised three open science meetings. Several science visits were also done during the project.

The core of our project was to use wide-angle heliospheric imagers onboard the twin STEREO spacecraft to study solar eruptions and the solar wind (see figure below). Heliospheric imaging is currently one of the only ways to bridge the huge gap between solar and direct solar wind observations.

Over the past three years we worked hard to build various catalogues for the scientific community. All the catalogues are now uploaded to our project webpage and they are ready to use.

The catalogue of coronal mass ejections (CMEs) identified manually from the heliospheric imager data is the “Master catalogue” and first of its kind. We used also widely other observations. For example, you can find the catalogues that give key CME parameters based on the geometric modelling of coronagraphic data and in-situ reconstructions, information on CME sources and associated radio waves. We also produced a catalogue of solar wind stream interaction regions that could be traced with heliospheric imagers. The catalogue I find particularly useful in my own studies links solar, heliospheric and in-situ CMEs.

Although the project ends, the work grounding on HELCATS will continue. One of the best things in participating in such a big international project was to get to know better and work with many great scientists in the field. And young scientist can establish their scientific network. Below you can find a summary video I made of our final open science meeting.

Since 1960s we have known that southward interplanetary magnetic fields and fast solar wind are behind every significant space weather disturbance. These conditions allow magnetic reconnection opening the dayside magnetopause and transferring effectively solar wind plasma and momentum into the Earth’s magnetosphere.

Stronger and faster solar wind does not however necessarily mean stronger space weather storms. This non-linearity in the response of our near-space environment is known as the saturation of the potential across the polar cap. Many theories have been presented to explain why polar cap potential saturates, but none of them works for all solar wind conditions.

But what structures in the solar wind can provide such conditions? The best candidates are the magnetosheaths of coronal mass ejections (CMEs) that are composed of the turbulent plasma compressed at the CME-driven shock waves. From our previous works we indeed know that the sheaths are very efficient drivers of space weather storms and that their couple with the magnetosphere stronger than the CME flux rope itself. 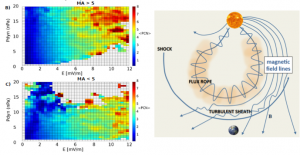