This is the second part of the paper “Election observation of the 2020 presidential elections in Belarus: main actors, electoral manipulations, and lessons for the future” by Dr. Alla Leukavets, a policy analyst at the Center for Strategic and Foreign Policy Studies in Minsk. The first part can be read in our blog. 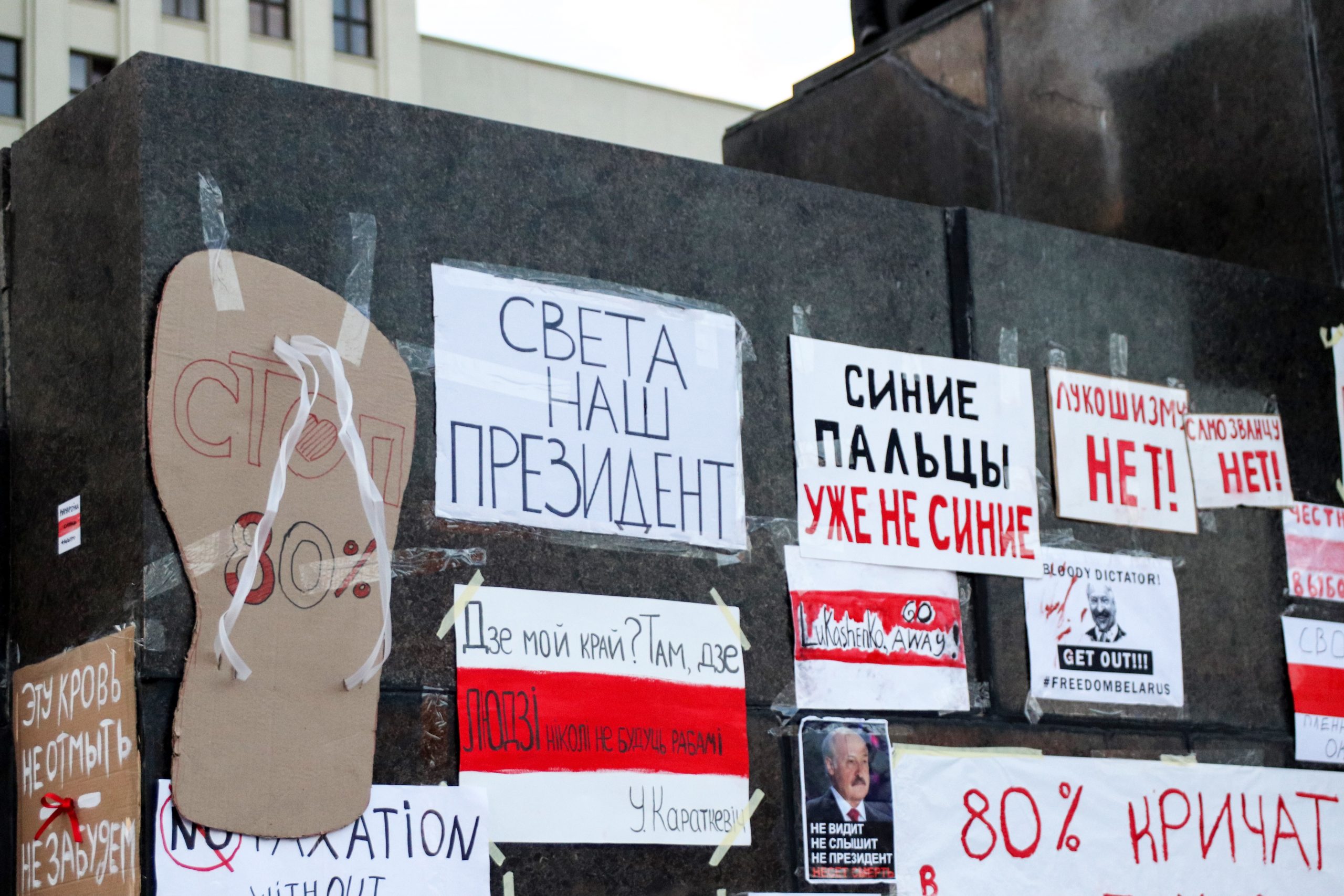 According to numerous reports, the 2020 presidential elections in Belarus were unprecedented in the amount of electoral falsifications and repressions applied by authorities towards representatives of the political opposition.

Analysis of the 2020 presidential elections demonstrates which strategies (or in Andreas Schedler’s words “a menu of electoral manipulations” (2002)) the Belarusian regime applied to break the “chain of democratic choice” to secure their desired electoral results.

The first set of strategies focused on breaking the “the range of choice” link in Schedler’s chain of democratic choice. The main strategies used by the regime dealt with the fragmentation of the opposition by restricting their access to the electoral arena. The means through which the regime excluded the competitors from the electoral game were manifold.

First, the Belarusian authorities developed cumbersome procedures to register political parties which provide broad discretionary powers to the registration authorities to reject the applications based on formalistic grounds. This burdensome registration process allowed the government to fully control the political environment and preclude or promote the appearance of new political actors if needed, limiting the right to freedom of association.

Second, the existing electoral legislation has a number of gaps and inconsistencies, including in the areas concerning the scope of restrictions on campaigning or grounds for removal of candidates. In numerous cases, during the 2020 presidential elections campaign, these provisions were interpreted and applied restrictively in relation to opposition candidates. As a result, the disqualifications of “unfavourable” candidates from the electoral game were often arbitrary acts by authorities and the result of fabricated politically motivated cases (for example, a case of embezzlement against Viktar Babaryka and a violation of order during campaign activities against Siarhei Tsikhanouski).

The second set of strategies focused on breaking the “formation of preferences” link.  In order to prevent voters from acquiring information about the opposition candidates, the regime obstructed the opposition from disseminating their campaign messages.

During the campaign period, the opposition candidate Sviatlana Tsikhanouskaya was denied a space for her pre-election picket in the capital Minsk due to a dubious reason – this space was allocated for celebrating one of the state holidays which had never before been widely celebrated in Belarus.

Furthermore, recent amendments to the Law on Mass Media introduced additional regulations for online media. According to the changes, the Ministry of Information, which is the primary regulatory body for media in Belarus, was granted wide discretionary powers to restrict access to websites on the basis of its own monitoring or notification from other state agencies. In addition, the new amendments obliged online media operators to collect, store, and provide to law-enforcement organs personal data of those individuals who comment on online articles. As a result of these measures, public discussion about elections was severely restricted. Thus, the regime attempted to skew the playing field by capturing institutions which should promote political pluralism and severely limiting the opposition’s access to the public space. In response, the public discussion moved to more secure social media platforms, such as Telegram channels, which played a crucial role in mobilising people against the regime and galvanising the post-election protest movement in Belarus.

The third group of strategies concerned breaking the “expression of preferences” link, i.e. influencing voters to express their preferences in a certain way through voter intimidation and voter buying.

According to a wide-spread practice, the Belarusian regime puts pressure on specific groups of the population, including civil servants, military personal or students to cast their vote in advance of the E-day, i.e. during the early voting (5 days before the E-day) which provides a lot of opportunities for falsification of election results. The authorities apply a mix of threats and rewards to realise this strategy: in some cases, for example, the students were promised a day-off from attending classes, whereas in others they were threatened with losing their place at the dormitory. The latter approach especially targets students who come to study in bigger cities from the periphery and are particularly vulnerable to pressure as they depend on the volition of the administration to have a place to stay at the student accommodation.

The fourth group of strategies focused on breaking “the aggregation of preferences” link.  It manifested itself in electoral fraud, including ballot stuffing, increasing turnout rates among the loyal population (especially during early voting and home-bound voting), mistakes in voter registration, falsifications during counting and tabulation processes as well as depriving independent election observers of entering the premises of the polling stations and detaining them.  One of the key mechanisms which facilitates the electoral malpractices is the composition of precinct electoral commissions: the members of most of them belong to one institution, e.g. a school, hospital, or enterprise, and are usually chaired by the head of these institutions. Such commissions function efficiently and unanimously as the members are aware that the results of their “work” can have an impact on their future employment at the institutions which they represent.

Thus, The Belarusian regime has used a variety of strategies to manipulate the election results, consisting of both hard repression measures, including detentions and prosecution of opposition candidates and independent election observers as well as more subtle mechanisms, including ballot stuffing, falsifications during the counting and tabulation, manipulating the rules governing media and access of the contestants to the public space.

What Went Wrong for the Belarusian Regime This Time?

However, the rich menu of electoral manipulations consisting of massive falsifications, detentions, and arrests of observers and representatives of the political opposition was not accepted by the Belarusian citizens and they came out into the streets to protest against the fraudulent results of the elections. Several factors contributed to triggering this result.

The first one was the mishandling of the pandemic by the authorities.  Lukashenka and his entourage adopted a ridiculous approach to fighting coronavirus. Lukashenka called it a corona psychosis and recommended saunas, working out in the fields, and drinking vodka as the best remedy to fight the virus. The anxiety and anger of the population started to grow as many people were taken to hospitals and died there, sometimes because of a lack of necessary treatments and the old infrastructure. The message sent to the general public was that wearing a mask is unnecessary and even shameful. This narrative was emphasized not only by Lukashenka himself but also by other officials, for example, by the Minister of Foreign Affairs, Uladzimir Makei, who said that he feels embarrassed to wear a mask when shopping.

In addition to coronavirus, the economic situation in the country had been worsening for some time leading up to the elections which contributed to increasing social dissatisfaction with the Lukashenka regime and also considerably lowered the level of trust in the authorities.

Another factor is the role of social media, i.e. Youtube and Telegram channels which have led to the appearance of new faces on the political spectrum in Belarus. The authorities clearly underestimated the role of social media in politicising the Belarusian people. One of the figures that have emerged thanks to digital media was Siarhei Tsikhanouski  – a famous youtube blogger who had many followers at his channel titled, “Country for life”. Another famous social media persona is Styapan Putila who migrated to Poland and created a youtube channel Nexta (which stands for “somebody” in Belarusian). There are also several Nexta “channels” on Telegram where thousands of videos of what is happening in Belarus are being uploaded on a regular basis.  The videos from Nexta channels played an important role in galvanizing the protest movement in Belarus.

Finally, the role of technology, i.e the IT sector, was also crucial in these elections. Belarus is considered to be an IT hub in the post-Soviet space and there are many IT companies here which work as part of the Park of High Technologies. A group of IT specialists developed the online platforms (e.g., Golas, Zubr) for alternative counting of the votes.  These platforms provided the key evidence which contributed to delegitimising the official results of the presidential elections and clearly showed that Lukashenka did not win in the elections with 80 percent as the official results stated.

Thus, the combination of these factors, i.e., mishandling the coronavirus situation by authorities, the worsening economic situation in the country, and the role of digital media and the IT sector contributed to mobilising people against the ruling regime, raising Belarusian’s dissatisfaction with the results of the elections and bringing people in such massive numbers to the streets to demand changes.

In Lieu of Conclusion

Although many election observers in Belarus were threatened, detained, and imprisoned and the Central Election Commission made the outlandish report of Lukashenko’s landslide victory,  the work of observers made a crucial contribution to exposing the electoral fraudulence exercised by the regime. The grassroots initiative “Human Rights Defenders for Free Elections”, “Honest people”, “Prava Vybary”, the online platforms Zubr and Golas as well as independent citizen observers managed to create a network for communication, support, and data-sharing. The work of observers put pressure for fair counting at some polling stations and presented essential data on the turnout, alternative votes, violations of voters’ rights and election procedures. Documented testimonies, systematic collecting and publishing of evidence helped to show the appalling scale of falsifications made by the ruling regime to ordinary Belarusians and the world at large.  This evidence inspired Belarusians to take to the streets in massive numbers to demand an end of repressions, the resignation of Lukashenka as well as the conduct of new free and fair elections.