The Conferment Ceremony is a three-day event, the finest in the academic world, an occasion for the new doctors to celebrate their degree. Only by attending the ceremony they get the right to use the insignia of their academic rank – the doctoral hat and the sword. 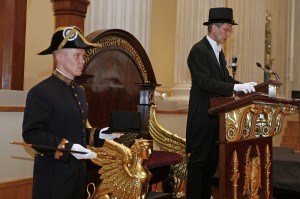 The tradition of conferment ceremonies at the University of Helsinki is old, as the very first ceremony was held already in 1643. The ceremony is a celebration of scientific achievements, and in most faculties also the master’s degree is cause for solemn festivities. At the Faculty of Veterinary Medicine – as the first degree produces licentiates, not masters – the ceremony is reserved for doctors.

The conferment ceremony marks the end of studies at the university. All those who have defended their doctoral thesis at the Faculty of Veterinary Medicine, and whose qualifications have been approved before the day of the ceremony, can take part in the event.

The promovendi are usually accompanied by their spouse or other companion during all the parts of the ceremony, also the dinners and the ball. It is also possible to attend without a companion (solo). There are two options in attending: either one attends all the events in the three-day programme, or only the actual Conferment Ceremony and its rehearsal the day before.

Finally, it is also possible to be conferred while absent (in absentia). This gives the right to use the insignia, and one’s name and data will be included in the Conferment Matricula or catalogue.