During the summer all exam rooms in Helsinki are open from Monday to Friday (except on midweek holidays) with shortened opening hours.

Exam room in Lahden is closed from 24th June until 4th August and Exam room in Mikkeli from 15th July until 28th July. 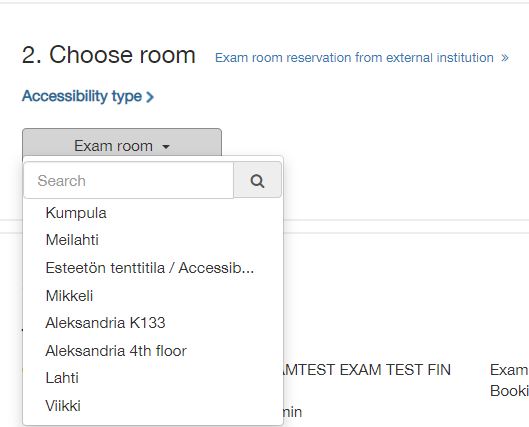 University of Helsinki is not yet participating in the “Exam visit” -pilot, where students can take their own university’s exam in another university’s Exam room. Therefore don’t reserve an exam room from an external institution. Use the exam rooms listed above.

There will be service break starting at 8 a.m. The exam rooms are closed until 11.30 a.m.

Examinarium will be updated to the next version on 20th of February. There will be service break starting at 8 a.m. The exam rooms are closed until 12 a.m.

Tips and News for Examinarium-examiners:

1. Rules for exams in electronic exam rooms (Examinarium) has been updated. Please note these changes:

2. Instructions for teachers in English: https://blogs.helsinki.fi/examinarium-en/instructions-for-teachers

The EXAM consortium carries out a user survey simultaneously in all the 27 member universities 2.5. – 20.5.2018.  Responding to the survey takes about five minutes. It is very important to have your feedback to develop the EXAM system and the electronic exam practice in your own university and in the EXAM consortium as well. (EXAM is called Examinarium at the University of Helsinki)

If you leave your contact information at the end of the survey, you will participate in the lottery of a hundred euro gift token to the online shop Verkkokauppa.com. The lottery winner will be published on the www-pages of EXAM-consortium (http://www.e-exam.org). The winner will be contacted personally by the end of May.

The personal data collected for the lottery will be used only for this purpose and they will not be connected to the answers of the survey.

Tips and News for Examinarium-examiners:

1. Respond to a national user survey

The EXAM consortium carries out a user survey simultaneously in all the 27 member universities 2.5. – 20.5.2018, intended for both teachers and students.  Responding to the survey takes about five minutes. It is very important to have your feedback to develop the EXAM system and the electronic exam practice in your own university and in the EXAM consortium as well.

In this year’s survey, we wish feedback especially on the new user interface of EXAM (Examinarium, in the University of Helsinki). If you have used Examinarium after the update on 12.3.2018, we would very much appreciate hearing your opinion. Survey: https://elomake.samk.fi/lomakkeet/7612/lomake.html

2. The exam room in Kumpula moves in May

Kumpula library is under renovations starting from 18 May and the exam room in the library moves to Chemicum. There will be approximately a week-long break in exams in Kumpula due to this change. During the break, students can use the exam rooms on other campuses, excluding students taking the paper exams of the Faculty of Science.

Students are free to take exams throughout the summer in Aleksandria, Viikki, Lahti and Mikkeli, although the opening hours will be shorter. In Kumpula, the new exam room will be open according to the opening hours of the building. During the summer, the assessing time of the exams will be longer but please notice that the camera recordings are available for only a month after the exam.

There is a scheduled morning maintenance break in Examinarium on the first Monday of every month. The next maintenance break will be on 7 May, and on next morning on 8 May, there will also be an update in the system from 7.30 to 9.30 AM, causing a break in the use of Examinarium. The update will fix the problem of exam computers slowing down during long, 3-hour exams.

During maintenance breaks in Oodi, the actions in Examinarium where the information comes directly from Oodi are unavailable. This applies to reserving exam times and creating new exams for courses that have no previous exams in Examinarium.

Examinarium team wishes you  great springtime! We are happy to tell you more about Examinarium and we also offer training and workshops. edutech (at) helsinki.fi

For the students the new features include an updated user interface and a notification email 24h before the exam. In order to change your reservation, select the icon with three dots from the “Locked exams page.” 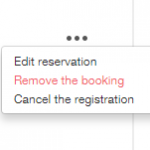 If when booking a new exam time the system tells you that “You have used all your attempts to pass this exam”, please contact the examiner. You have probably either aborted your previous exam attempt or did not use the exam time you booked. The examiner has to release an attempt for you before you can book a new exam time. If you have already taken the same exam and submitted your answer for grading, please wait for the examiner to grade your exam.

Examinarium will be updated to the next version on 12th of March. There will be service break starting at 8 a.m. The exam rooms are closed for the whole day.

The new version will bring about an updated user interface. Teachers will have access to the exam settings and study attainments straight from the Dashboard. The exam settings will be  spread between several tabs. 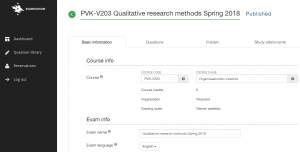 New features include fill-in questions and a notification emails for the students 24h before the start of their exam.

1. About Oodi registration and grading

The whole course grades assessed in Examinarium are automatically sent to the student information system Oodi. When examiner clicks the “Lock the assessment and inform student”-button, the grades are sent for registration. Study counselors are informed the next morning about the grades that are ready for registration. In case the grading information needs to be changed, inform the study counselors about the change.

When grading exams in Examinarium, the last choice in the list of grades is ”No grading”. That can be used, when examiner for some reason is not going to grade the exam at all.  When “No grading” is selected, the student won’t receive an email about his/her assessment and the grade is not sent for Oodi registration.

2. The number of allowed attempts and how to release attempts

In basic information for the exam in Examinarium, there is a setting called “The number of allowed attempts”. This setting defines how many times the exam can be taken before evaluation. Evaluation releases an attempt. If the student aborts the exam or doesn’t come to the exam (is “No-show”), he/she has used one attempt. In these cases, the teacher can release an attempt for the student.

3. Exams are stored in Examinarium for 12 months

Remember that locked assessments are archived after 12 months. Archiving means that the students’ answers and grades are deleted, and the information is only used for statistics.  If you need the answers or grading information longer than for 12 months, remember to save the information for yourself.

4. New exam room opens in Viikki and possibility to take exams in Lahti

A new exam room with six computers opens in Viikki Campus in February. The room is on 4th floor in Infocenter Korona. The current exam room with two computers will be closed down after that.
In near future our students will also have a possibility to take exams in Lahti in Niemi Campus.

5. Exam consortium organizes a series of webinars in Finnish

Automatic Oodi registration for assessed Examinarium exams has begun. All locked assessments where exam type is marked as a “Whole course grade” are automatically sent to student registry system Oodi. Therefore the complete course grades no longer need to be saved and delivered to student services by the teacher.

Note that the procedure with partial course grades is the same as before: the assessment needs to be saved in Examinarium and the results delivered to student services by the teacher.