SPP (Stand Photosynthesis Program , Mäkelä et al. 2006) is a graphical interface that combines the canopy light model of Stenberg (1996) with different models of forest ecosystem CO2 exchange and evapotranspiration. The basic operating principle in SPP is integration of small-scale processes over the forest stand. Photosynthetic production of a whole tree or a stand is the sum of photosynthetic production of all individual leaf elements. The leaves located in different parts of the canopy experience different conditions, each leaf having its own microclimate and thus different rate of gas exchange.

The SPP forest stand is divided into one or several size classes that can represent, for instance, different tree species or overstorey and understorey trees and ground vegetation. Each size class may have its own gas exchange model and parameter values as well as phenology. In each size class, the canopy foliage mass is distributed evenly inside the individual crowns, i.e., there is no explicitly defined structure inside the crowns. The internal structure of the crown is condensed into an aggregated parameter k, which is equivalent to the Lambert-Beer light extinction coefficient. The tree crown is divided into volume elements and the light intercepted by the shoots in each volume element is calculated. Calculation of light attenuation and intercepted radiation is based on the canopy light model of Stenberg (1996).

The photosynthesis component of SPP consists of three models of different complexity:

All these models can be combined with temperature-driven annual cycle (Mäkelä et al. 2004; Kolari et al. 2007) as well as leaf unfolding and senescence phenology (Linkosalo 2000 ).

SPP can calculate stand water balance and the effects of water availability on stomatal control (Duursma et al., 2008). Evaporation from the ground is driven by solar radiation entering the ground surface (modified from Priestley and Taylor, 1972). It is also possible to define different climate change scenarios without manually manipulating the input weather data.

SPP is programmed with Delphi (Object Pascal). Latest version can be obtained from Pasi Kolari. 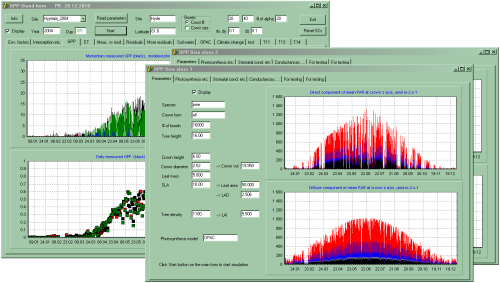 Kolari P., Lappalainen, H.K., Hänninen, H. & Hari, P. 2007. Relationship between temperature and the seasonal course of photosynthesis in Scots pine at northern timberline and in southern boreal zone. Tellus 59B, 542–552.

Linkosalo, T. 2000. Analyses of the spring phenology of boreal trees and its response to climate change. PhD thesis, University of Helsinki.

Stenberg, P. 1996. Simulations of the effects of shoot structure and orientation on vertical gradients in intercepted light by conifer canopies. Tree Physiology 16, 99–108.