where: P = precipitation, ET = (actual) evapotranspiration, R = runoff (all non-evaporation losses of water from the soil, see below), ±ΔSM = changes in soil moisture storage, and ±ΔSOG = changes in water equivalent of snow-on-ground. All units are in mm of water and both monthly and daily time step versions are available. The model requires modest meteorological (air temperature, precipitation, global radiation or cloud cover), site (latitude, elevation), forest stand (canopy cover) and soil (moisture content at field capacity, permanent wilting point) input data that is usually valuable for any site. Evapotranspiration, ET, is calculated from an alfalfa reference crop ET (potential evapotranspiration) value (Jensen-Haise global radiation method) using a crop coefficient (Kc) approach and a soil water availability index. It is also possible to take into the effect of slope and aspect on ET using tilt factors for direct and diffuse radiation. The runoff component, R, refers to the water leaving the soil by flow rather than evapotranspiration. It can be treated collectively or, using parameters, allocated into bypass flow and drainage . Bypass flow consists of rapid surface runoff, subsurface runoff or throughflow (macro-pore flow), which occurs when there is a lot of water available for entering the soil or when the soil is saturated (e.g. during snowmelt or intense rainfall), and water bypasses the main pore system of the soil matrix. Drainage refers to deep percolation; that is the water draining out of the soil layer of interest (usually the rooting layer). The water drains through the soil meso- and micro-pore system by gravity and only occurs when the soil water content is above field capacity. The model is useful for calculating evapotranspiration (water use), soil drainage and leaching fluxes, snowmelt, and soil moisture deficits. For more details, contact Mike Starr (firstname.lastname@helsinki.fi). 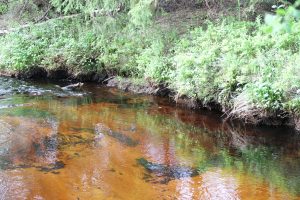 The objective of this cross-disciplinary project was to increase our knowledge about the impact of harvesting of drained peatland forests on the hydro-biogeochemistry of trace metals (Pb, Cd, Ni, Cu, Zn and, in particular, Hg), their mobilization and transport to surface waters. Disturbance related to harvesting can be expected to result in the mobilization increased transport of heavy metals to surface waters.

A “paired catchment” approach was used. The 8 study catchments (2-10 ha) are located in the Sotkomo area of north eastern Finland, have a shallow (1-2 m) cover of peat and are underlain by either granite or black shale. The black shale has relatively high levels of organic carbon and trace metals. The stands (Scots pine) were  ready for harvesting. The impacts of whole-tree versus stem-only harvesting and the influence of bedrock geology on the fluxes and mass balance of the trace metals was compared. The research project also included development of analytical methods, determination and modelling of trace metal speciation and complexation with organic matter, and investigation of the role of microbiology on the release of trace metals from peat. HYPE was funded by the Academy of Finland. Besides myself, the research team consists of scientists from Finnish Forest Research Institute (METLA), Geological Survey of Finland (GSF), Finnish Environment Institute (SYKE), and the University of Oulu. The research group also has cooperation with trace metal biogeochemistry groups in Sweden (SLU) and Canada (University of Quebec).

The aim of this long-term study is to investigate water and nutrient fluxes in forested headwater catchments and to determine the effects of final cuttings and soil preparation on ground vegetation, soil, soil water, ground water, and stream water. A “paired catchment” approach is used.

In addition to selecting five catchments in eastern Finland for the project, the catchments from the old Nurmes-project, established in 1980, are also included. Forestry operations done in the catchments include: clear-cutting, soil preparation, and regeneration. The biogeochemistry of the catchments has been continuously monitored allowing pools, fluxes and mass balances of water, carbon and nutrients to be calculated. are monitored. The long-term data sets are not only suited to monitoring the impacts of forest management practice but also suited to the study of climate change and recovery from declining acid deposition loading, and to the application of dynamic biogeochemical models. As a result, there has been and is considerable cooperation with many national and international projects, and funding has come from many sources.

The project is led by the Finnish Forest Research Institute (Joensuu Unit), and carried out in cooperation with University of Helsinki, the North Karelia Centre for Economic Development, Transport and the Environment, the Finnish Environment Institute (SYKE), Metsähallitus (Forest and Park Service), Aalto University School of Science and Technology, University of Eastern Finland, University of Oulu, and the Geological Survey of Finland (GSF). There is also cooperation with research groups in Sweden (SLU), Japan (Hyogo University), USA (Michigan Tech. University), and UK (Centre for Ecology and Hydrology).

Mike Starr1989- continuous, funding: various. This project forms the Finnish contribution to the International Cooperative Programme on Integrated Monitoring of Air Pollution Effects on Ecosystems, ICP-IM, which is part of the effect-oriented activities of the 1979 United Nations Economic Commission for Europe (UNECE) Convention on Long-range Transboundary Air Pollution (LRTAP). It belongs to a group of six specialist International Cooperative Programmes (ICPs) that have been set up under the LRTAP Convention’s Working Group on Effects to look at relevant receptors and environmental issues. The ICP IM sites are small headwater catchments located in natural or semi-natural areas.

The overall aim of the ICP Integrated Monitoring was originally to determine and predict the state and change of terrestrial and freshwater ecosystems in a long-term perspective with respect to the impact of air pollutants, especially sulphur and nitrogen. The purpose was to provide a scientific basis for policy decisions on emission controls and assessment of the ecological impact of such controls. In addition, the biogeochemistry of carbon and heavy metals can be followed in the ICP IM programme as well as providing data on the impacts of climatic change and changes in biodiversity.

There are four Finnish ICP IM catchments: Valkea-Kotinen (61°N), Hietajärvi (63°N), Pesosjärvi (66°N), and Vuoskojärvi (70°N), representing the boreal zone. They are all situated in protected conservation areas and monitoring activities started at the end 1980s. Since 1999 activities in the two most northerly catchments have been substantially reduced. Permanent intensive plots for the monitoring of throughfall, litterfall, soil water, soil, trees and ground vegetation have been established in each catchment. The catchment lakes and outlet streams are also monitored. Since 2000 much of the intensive plot monitoring has been taken over by the ICP Forests programme.