The International Council for Central and East European Studies finally held its quinquennial convention, delayed from 2020, last week.  We were supposed to be in Montreal but, as has become the norm, the conference took place virtually.  This was originally planned as the event when GULAGECHOES would present its preliminary findings to the international Russian, Eurasian and East European area studies audience and we still had the opportunity to do this.  Jeff Hardy of Department of History, Brigham Young University and Judith Pallot, Director of the Aleksanteri Institute had organised a two-session panel entitled  Ethnic, Religious, and Cultural Tensions in the Gulag and Its Successors I & II. There were eight paper givers and two discussants five of whom were from the project.  Mikhail Nakonechnyi talked about how people from the southern republics fared in the gulag northern camps based on the work he was able to do in the Russian archives before they were closed by lockdown. The other papers were given by Emily Johnson of the University of Oklahoma and Tyler Kirk, University of Alaska on letters and testimonies written by gulag prisoners. In the second session three of the papers were from the project; Judith introduced the theme of ethnicity in Russian prisons today with a paper analysing the official discourse on the concept of the multi-cultural prison; Albina Garifzyanova and Elena Omelchenko from Kazan University and HSE St Petersburg respectively, presented the findings from interviews with former prisoners in the Urals, and Rustam Urinboyev, presented his findings form Uzbekistan. Jeff Hardy rounded out the pane with a paper on religion in the late Soviet gulag.  Recordings of all these papers, and the proceedings of the conference in general will be made available on the ICCEES conference website (panels 3.2 and 14.5) for the next two months at https://sites.events.concordia.ca/sites/iccees/en/iccees2020 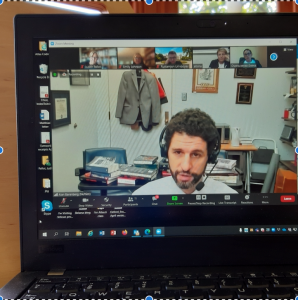 Discussant Professor Alan Barenberg delivers his verdict on our papers in session 14.5.