Mikko Mattila, Achillefs Papageorgiou & Lauri Rapeli (2020): Interest through necessity? The impact of personal health on the stability of political interest in the United Kingdom. British Journal of Politics and International Relations. Forthcoming.

Interest in politics is a key indicator of citizens’ attitudes towards politics. Scholars disagree whether interest is a stable trait developed during adolescence, or if it changes over the life course. We hypothesise that deteriorating health can destabilise the stable sense of political interest because worsening health makes individuals more dependent on public healthcare and increase their attention to politics. Furthermore, we assume that the impact of health on interest is conditional on income as people with low incomes are dependent on public healthcare. Our results show only limited support for the first hypothesis. However, we found a negative relationship between declining health and increasing interest in the lowest income group. The results are consistent with the life-cycle theory, which presumes that important events in life have consequences even for the most endurable political attitudes. Deteriorating personal health can be a source of motivation to make persons more interested in politics.

Recent research has shown the effect of health on voter turnout, arguing that attenuated health depresses voting. However, we know little about how health is connected to the psychological factors, such as party identification, that precede actual political participation. Employing data from the German Socio-Economic Panel (SOEP), we show that when a person’s health deteriorates, the degree of partisan attachment declines, whereas health improvement does not automatically restore the level of party identification to previous levels.

Turnout and party choice are widely held to be habitual, but little attention has been paid to factors that disrupt the pattern. Good health is an important determinant of political behaviour and a key component life quality. Based on the developmental theory of turnout we hypothesize that declining health lowers voting propensity over the life-course. We employ issue ownership theory to assume that declining health increases voting for Labour. Using the British Household Panel Survey data we show how deteriorating health significantly lowers propensity to vote, but if a person in poor health votes, she is more likely to support Labour than the Conservatives. As expected by the developmental theory, major life events, such as declining health, affect voting propensity. Results also support issue ownership theory: declining health increases Labour voting which implies that British voters turn to the party that owns the health issue when the issue becomes salient. 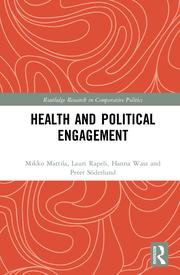 Previous studies show that people with poor health have a lower propensity to vote. With individual-level register data on sickness allowance episodes and voting in three Finnish elections, we address the following questions: 1) What degree of sickness allowance days negatively influences turnout? 2) Are sickness absences on election day more harmful than absences that occur before the elections? 3) What is the effect of cumulative sickness allowance spells before the elections over a period of several years? We use a threefold categorisation approach, which differentiates between immediate, short-term and long-term health effects on voting. The results show that multiple sickness allowance spells over several years are more strongly connected to turnout than health problems experienced only in the year prior to the elections. Falling ill at the time of the elections had no consistent additional negative relationship with voting. We suggest that the demobilising effects of immediate health problems are associated with tangible factors, while long-term effects are related to lowered levels of political efficacy, interest and social connectedness.

We explore two theoretical possibilities for why personal health may affect political trust: the psychological-democratic contract theory and the role of personal experience in opinion formation. We argue that citizens with health impairments are more likely to experience the direct effects of political decisions, as they are more dependent on public health services. Negative subjective evaluations of public services can lower trust levels, especially if people’s expectations are high. Using European Social Survey data, we analyse the association between health and trust in 19 Western European states. The results indicate that people in poor health exhibit lower levels of trust towards the political system than people in good health. The differences in trust between those in good and poor health are accentuated among citizens with left-leaning ideological values. Our results suggest that welfare issues may constitute a rare context in which personal, rather than collective, experiences affect opinion formation.

Occupation-based social class is an important, yet under-explored, factor in electoral participation. In this article, social class differences in voter turnout over time are measured, and how two other resources – namely income and health – mediate or modify this relationship is analysed. The analysis is based on an individual-level register-based 11 percent sample of the entire electorate in the 1999 Finnish parliamentary elections, and secondarily on smaller register-based samples in the 2012 presidential and municipal elections. Results show that income mediates part of the effects of social class on voting, while social class and utilised health indicators exert mainly independent effects on turnout. Social class differences remain largely stable in all income and hospital care groups, except that no differences between classes are observed among those most severely affected by health problems. Results are also mostly similar between those of working age and the older population, and between men and women, and remain stable over time and in different types of elections. The findings imply that social class should be taken account in theoretical and empirical models of turnout.

Several studies suggest that people suffering from ill health or disabilities have a lower propensity to vote. Using six rounds of the European Social Survey, we examine whether the effect of health or functional disabilities on electoral participation is less or more pronounced in countries which utilize a wider range of facilitation instruments, such as advance or postal voting, proxy voting and voting outside the polling stations. Our findings show that with the exception of proxy voting, voter facilitation instruments not only have insignificant main effects but also a negative interaction effect with poor health/functional ability (FA). As a result, voter facilitation intensifies the health-related differences but not by activating those who are more active to begin with, as suggested in previous studies. The endogeneity argument thus seems most warranted explanation for our findings: countries with low turnout among people with impaired FA or health are more likely to adapt facilitation practices.

Background While poor self-rated health is known to decrease an individual’s propensity to vote, disaggregation of the components of health on turnout has thus far received only little attention. This study deepens on the understanding of such relationships by examining the association between chronic diseases and voting.

Results After adjusting for gender, age, education, occupational class, income, partnership status, cohabitation with underaged children and hospitalization during Election Day, neurodegenerative brain diseases had the strongest negative relationship with voting (dementia OR=0.20, 95% CI 0.18 to 0.22; others up to OR=0.70). Alcoholism (OR=0.66) and mental disorders also had a negative association (depression OR=0.91; psychotic mental disease OR=0.79), whereas cancer and COPD/asthma had a positive association (both OR=1.05). Having more than one condition at a time further decreased voting probability.

Conclusions By showing how different health conditions are related to voter turnout, this study provides essential information for identifying gaps in the potential for political participation and for further inquiries aiming to develop models that explain the link between health and voting probability.

Söderlund, Peter & Rapeli, Lauri (2015): In sickness and in health. Personal health and political participation in the Nordic countries. Politics and the Life Sciences 34(1): 28-43.

In search of a better understanding of inequalities in citizen political engagement, scholars have begun addressing the relationship between personal health and patterns of political behavior. This study focuses on the impact of personal health on various forms of political participation. The analysis contributes to existing knowledge by examining a number of different participation forms beyond just voting. Using European Social Survey data from 2012/2013 for Denmark, Finland, Iceland, Norway and Sweden (N=8,060), self-reported turnout and six alternative modes of political engagement were modeled as dependent variables. Contrary to expectations, poor health did not depress participation across all forms. As assumed by the increased activism hypothesis, all else equal, people with poor health were more active than their healthy counterparts in direct contacts with power holders and demonstrations. The results reveal a “reversed health gap” by showing that people with health problems are in fact more politically active than what previous research, which has focused on voting, has suggested. Although the magnitude of the gap should not be overdramatized, our results stress the importance of distinguishing between different forms of participation when analyzing the impact of health on political engagement. Nevertheless, the findings show that poor health can stimulate people into political engagement rather than depressing activity. This finding holds when the effects of several sociodemographic and motivational factors are controlled for.

Based on five rounds of European social survey (ESS), we examine both the direct and indirect effect of health, channelled by social connectedness, on turnout in 30 countries. Our analysis is the first attempt to make a comprehensive account of the magnitude of health in electoral participation. The results show that health has an effect on turnout and that it is notably larger among older people. The impact of health is partly mediated by social connectedness, which suggests that attenuated health may weaken an individual’s social network which in turn depresses voting.

In recent years, the effect of health on political participation and attitudes has gained increased interest among scholars in political behavior. Studies based on Finnish data or data with focus on youth are, however, scarce. This study contributes to existing literature by examining the extent to which frequent health symptoms are connected to the turnout in the 2014 elections for the European Parliament and attitudes and trust on welfare policies among 18–29-year-olds Finns. The results show that frequently experienced symptoms are related to lower turnout among women (but not among men), although the relation is no longer significant after the effect of education is taken into account. Frequent symptoms do not seem to decrease general support for the welfare state. Yet, among those young citizens who suffer from multiple frequent symptoms, lower level of trust for the sufficiency of social security can be detected. Low trust in health-related social security also exacerbates the negative effect of poor health on electoral participation. On the other hand, even a large amount of frequent symptoms does not decrease ability or motivation to vote among those who have strong trust on social security.

This study analyses the effect of individuals’ self-assessed health on their likelihood of turning out in parliamentary elections in Finland and in Europe. An examination of previous studies in the field of politics and health shows that the field is still very patchy, diffuse and undertheorized. Because of the wide variation in research designs, data and methodological choices the existing studies cannot provide for a solid understanding of the relationship between health and political behavior. This article proposes that matching methods could be a partial solution for the methodological problems affecting the field. In the empirical section, the magnitude of the effect of poor health on voting propensity is calculated with traditional multivariate methods and matching methods. The results show that traditional methods over-estimate the size of the effect but only slightly. In all, the results show that voting is hampered by health problems both in Finland and wider in Europe.

Blog posts and publications for the general public or professional communities etc.

Making it easier to vote hasn’t cut health-related inequality in turnout. Quite the opposite. Democratic Audit UK.