It’s hard to describe what qualities a good mentor should have. When famous modern age photographer Ansel Adams was asked what role his father Charles Hitchcock Adams played in his life as a mentor, he credited him for “tenderly keeping alive his inner spark.”

In search of the best mentors, the ILS doctoral program asked its students to describe how they think their mentors fare and what these qualities are. On December 11th 2015, at its Seasonal party, the ILS doctoral program announced the award for ‘Best Mentor of the Year 2015’ . Out of 5 nominations, Docent Mikaela Grönholm was chosen by the ILS Student Council as the first recipient of this award, based on the testimonial written by the nominating student. Mikaela was described as “having a friendly personality, approachable, supporting and at the same time (she’s) hard, strict and teaches us how to deal with struggles and helps you find your own ways”. Other nominees which included Katarina Pelin (Viikki), Ville Hietakangas (Viikki), Krister Wennerberg (FIMM) and Peter Hackman (Biomedicum) were also acknowledged and felicitated at the event. 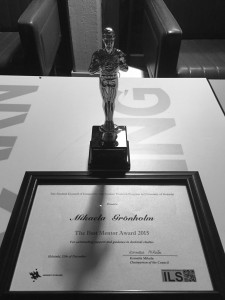 Mikaela or ‘Mikku’ as she is adoringly called by her students and colleagues, gave a brief acceptance speech including a few advises to the students: