Document, automate, and share your data analysis with Lir

Lir is a software tool for documenting, automating, and sharing computational work. We have demonstrated that Lir can improve the reproducibility of a complex data analysis. With Lir, it takes less effort to document the analysis, while the generation of all results is automated. Importantly, Lir supports the use of multiple programming languages and approaches in the same data analysis. This allows the user to employ whatever tool is best suited for each step of the analysis

For the month of November 2016 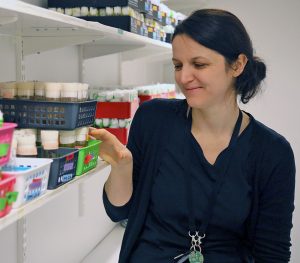 Petra Tauscher is a PhD student at the Institute of Biotechnology, Developmental Biology Program with Group Leader Dr. Osamu Shimmi. She is studying the post-transcriptional regulation of TGF-beta type signaling in Drosophila development, and has recently published an article on this topic. Congratulations Petra!

A fascinating area of research in biology is to understand how animals transform from a single-cell zygote to a fully-grown adult with sophisticated organ systems. Previous studies have shown that the genetic mechanisms of a huge variety of animal species during development is conserved, i.e. a similar group of genes carry out a conserved set of molecular functions. How is it possible that animals look so different, despite using the same mechanisms?

Because the developmental processes are conserved, it allows researchers to conduct studies in model organisms. For instance, invertebrates like fruit flies, as well as vertebrates use the same set of molecules for dorsal/ventral patterning (DV) during embryogenesis which ultimately determines the back/belly in adult form. The Bone Morphogenetic Protein (BMP) signaling pathway is one such conserved signaling that plays a crucial role during this process. It is also important for the posterior cross-vein (PCV) formation during pupal stage, which develops into the wings in flies. So how does the BMP signaling pathway result in DV patterning in one, and PCV in another context of development?

Petra thereby concludes that apart from the spatial and temporal changes in gene expression, post-translational modifications may be one way how evolutionarily conserved molecules and signaling pathways adapt to different developmental processes.