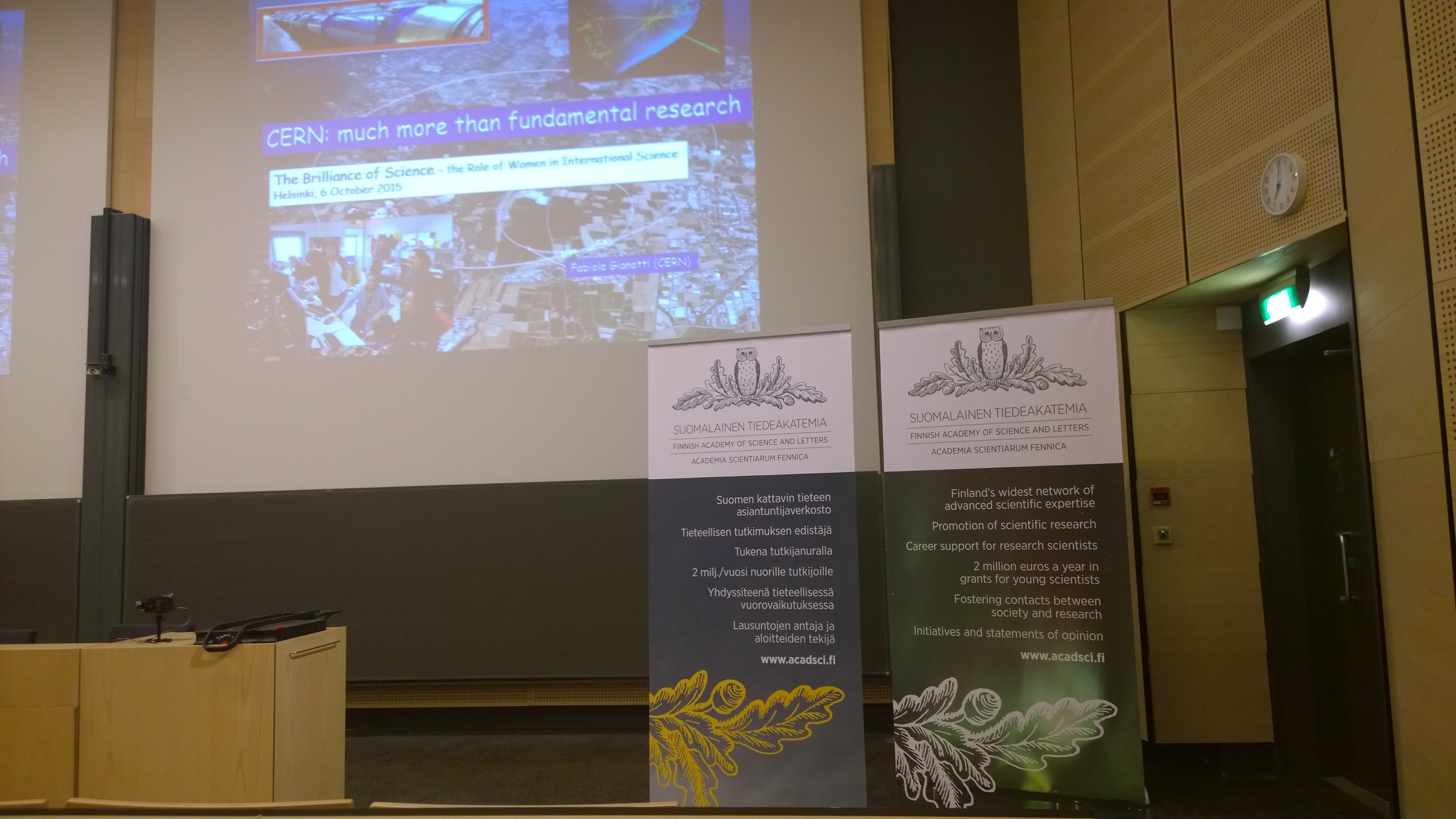 The role of women in the international research was discussed on the October 6th during the seminar organised by the embassy of Italy in Finland and Finnish Academy of Science and Letters in the University of Helsinki. Three top female researchers from Italy and Finland have been invited to give lectures on the role of women in the modern scientific community.

The event was opened by the welcoming words from the Ambassador of Italy, Mr. Giorgio Visetti, and the Permanent Secretary Anita Lehikoinen who emphasised the importance of gender diversity in science. Ms. Lehikoinen stated that the best approach to increase the number of women in science is to encourage young girls to study the most difficult scientific discipline. This could be done by both making female researchers visible as a role model for future scientists and improving the teachers education in a sense of gender equality.

Professor Angela Bracco from the  University of Milan and INFN Milano revealed the statistics of gender distribution in her research institution in the talk “The Approach and Contribution of Women to Push for Progress in Science”. 25% of the personnel of the INFN Milano are women including mainly the research, administration, engineering and technician staff. In the university of Milan 35% of students are women, including 28% in physics, 31% in Chemistry, 35% in mathematics, 68% in Biology and 32% in geology. The European Physics Society (EPS) made a survey aimed to find the reasons why only a few women choose science as their profession. The majority of women says that science is very demanding field to combine with the family life. The EPS takes a lot of action on promoting the gender equality in science and improving the social conditions to help women to overcome the barriers between their social life and the career in science.

Irma Thesleff is an academician and the professor of the Institute of Biotechnology at the University of Helsinki. Her talk “Towards Gender Equality in Finnish Top Science” was a great overview of the role of women in Finnish academia. The representation of women in academic top positions in Finland is pretty good comparing to other countries. The reasons for this goes deeply to the history of the Finnish society: traditionally women were working outside of homes; women have been equal to men politically since 1906 when Finland was first in Europe to grant women suffrage and the first in the world where women were able to stand as candidates at elections. Finnish academic society has examples of  brilliant Finnish female researches since 1901. Nowadays 28% of the professors and 24% of the academy professors in Finland are women. These fraction of women in science has been increasing through recent years and the Academy of Finland is aiming to keep this trend going. 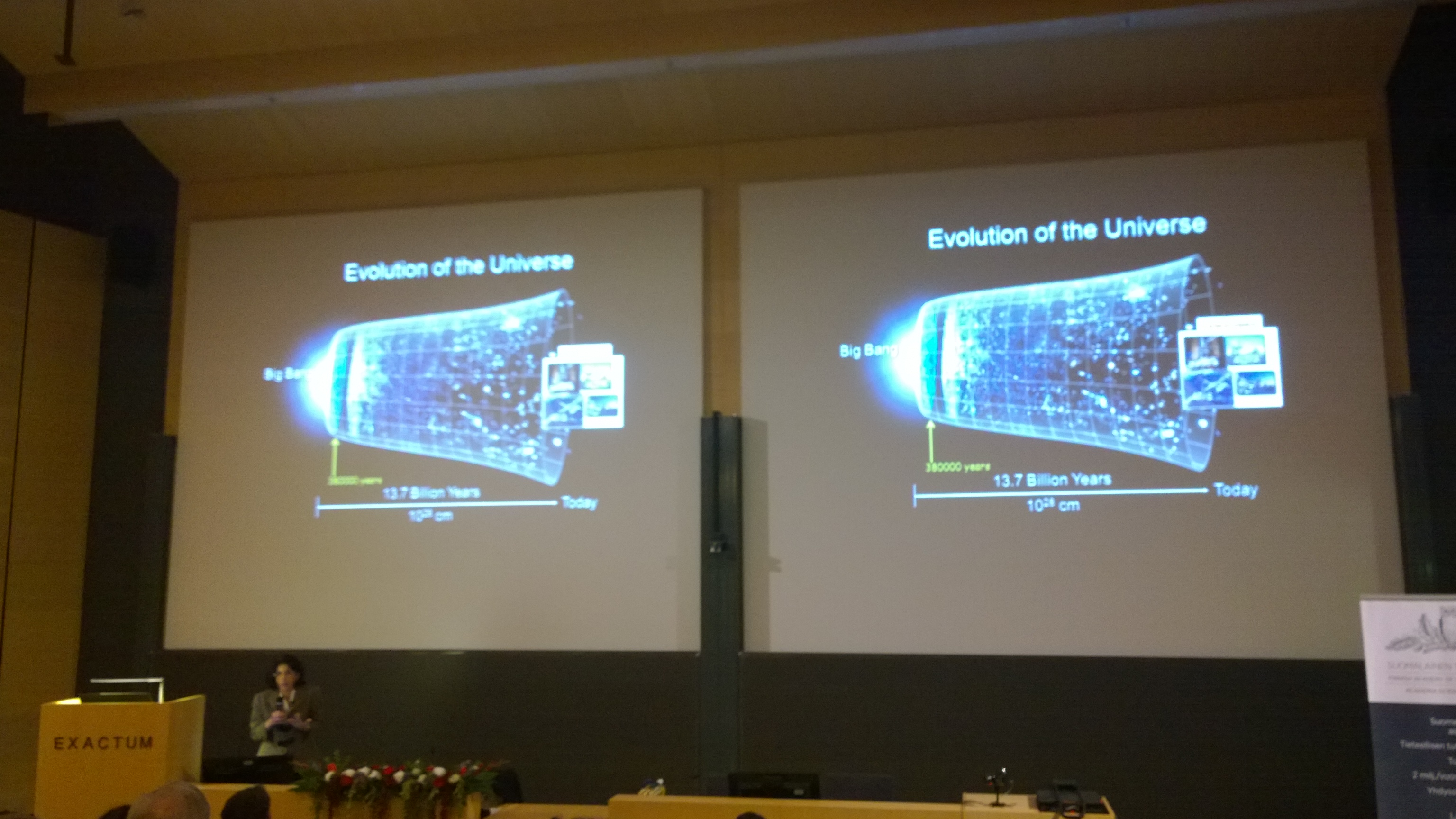 The key speaker of the event, Dr. Fabiola Gianotti, an Italian physicist and Director-General of the largest particle physics laboratory in the world, gave an inspirational talk named “CERN: Much More than Fundamental Research ”. After she gave an overview of the discoveries made in CERN, in particularly capturing of the Higgs Boson by the ATLAS detector, which Dr. Gianotti was project leader of, she changed the subject from science to people who made these discoveries possible. In her speech Dr.Gianotti stressed the importance of the diversity by any means: gender, age, nationalities, traditions etc. Nowadays, 11500 scientists of 113 nationalities are doing world leading science in CERN despite of the politics. As the scientifical center with the majority of people being less than 30 years old, CERN puts a lot of effort on education in general and the attraction of school kids to choose science as their future profession regardless of their gender. During the last 15 years the amount of female researchers in CERN has increased from 5% in 2000 to 20% in 2010 and counting. The positive thing here is that this proportion remains true for the scientist in a higher level of the CERN’s hierarchy as well. And CERN is highly interested in continuing the effort on increasing the fraction of women in the research centre.

“The diversity is our strength,” said Dr. Gianotti.

For more details, the summary in Finnish and the full video of the event please visit Finnish Academy of Science and Letters

Last week a live streaming of a TEDx CERN event titled “Breaking the Rules” was held in Physicum. Among the speakers stood out a Finnish contributor, well-known Linda Liukas. Linda is a programmer, a startupper and a champion of women in computer science. In 2010 she co-founded Rails Girls, an ongoing project to involve women with little to no experience in programming.

In 2012 she was named Digital Champion of Finland for her efforts of promoting digital culture:

In 2014, Linda successfully (over)funded a project through Kickstarter: Hello Ruby. It’s a nicely illustrated book, a “coding fairytale” (for kids aged 4-8), available in several languages. I bought my copy in Finnish last week!

Are you curious to take part in the Rails Girls bootcamps? There are plenty in Finland this fall.

(Featured image is from www.helloruby.com)

The Gender Summit is a joint meeting of researchers, gender scientists and policy makers from all over the world, aimed at analysing how gender bias or discrimination affect the quality of research and at unifying forces to end gender inequality in innovation.

The 7th edition of the Summit will be held in Berlin, Germany, on November 7th-8th. Among the illustrious speakers, the Vice-President of Academy of Finland Prof. Marja Makarow was invited to give a plenary talk.

Find one of the her previous speeches here:

The deadline for registration to the Gender Summit is on October 25th. Find more information on the official website.

An interesting event on Women in Tech is taking place in the current days 5.-9.10.2015 at the Fair Centre of Helsinki (Messukeskus). You can find the programme of the event at this link.

There is also a live streaming going on here (and I guess they will make videos available later). You can follow the discussion also on Facebook or on Twitter by the hashtags #WIT15 #womenintechFI.

Congrats to our fellow women in tech who keep up the discussion on gender equality!