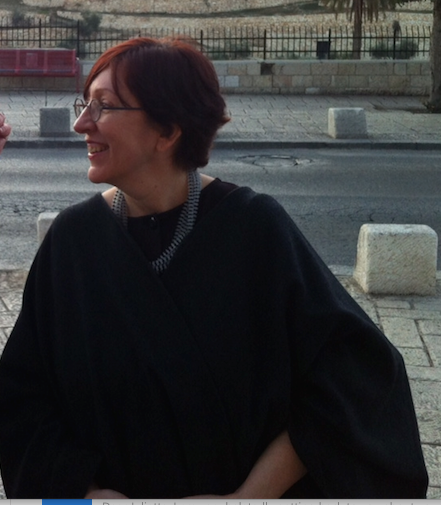 Here we go with another interview to introduce a lady rocking science here at University of Helsinki: Juliette Kennedy. Juliette is a Lecturer at HY, currently visiting the Isaac Newton Institute in Cambridge, UK. Beside working in mathematical logic, she is an active participant of the academic life and promoter of interdisciplinary activities.

Could you introduce yourself?

I am a university lecturer in the Department of Mathematics and Statistics. My area(s) is (are) logic and the foundations of mathematics. This encompasses mathematical logic, set theory, and the history and philosophy of logic.

In simple words, what is your research about?

Right now I am working on a kind of invariance, and this is how you detect it: if you take your favorite canonical mathematical structure most of the time it is built out first order logic, the logic in which the quantifiers range over elements of a given domain. I ask the question, what happens if you change the logic? To, say, second order logic, in which the quantifiers range over subsets of the domain.

How did you fall in love with mathematics?

I was not interested in it as a teenager. I wanted to write novels! But I happened to take a math course at NYU while I was an undergraduate there. The teacher was really great! From then on my fate was sealed.

One occasion on which mathematics really amazed you…

Hard to choose just one! Recently I was amazed by Åsa Hirvonen’s lectures on the Main Gap Theorem of Saharon Shelah, which she gave in her model theory course last summer as part of the Scandinavian Logic Society Summer School in Logic. To simplify the statement of the theorem just a little bit, it says that countable theories are either “classifiable”, which means that they have relatively few models and admit “geometric” invariants—like the basis of a vector space; or, in the nonclassifiable case, they have the maximum number of models possible. Also in the nonclassifiable case the models are very entangled with eachother, meaning that it is very hard to tell them apart. The mathematical statement of this entanglement is really beautiful, and the proof itself is majestic. The theorem took many years and about one hundred papers to prove—or so I have heard—but Åsa gave everyone a real sense of the proof in one week. That was amazing!

You publish papers on art as well. Does that relate to mathematics still or is it a parallel passion and research?

I think the answer is that both are true. I think it is very important to engage with the culture of your time, so for me the form this takes is art and curating. I believe art tells us something very important about what it means to be human; tells us where we are in our consciousness. On the other hand as a theorist I ask myself the question, can mathematical constructions be treated as artworks? Most of my curating is about this question in some form or other.

What was the biggest obstacle you had to face? And the achievement you are most proud of?

Biggest obstacle: Being a girl, no doubt!! I felt like a real “fish out of water” while I was an undergraduate (in the 1980s), even so that I had wonderful professors and I really loved my courses. Then in graduate school at CUNY I had to deal with a professor who decided he was in love with me. Phone calls morning, noon and night, and lots of other bad stuff went on. He stole years of my life.

Achievement I am most proud of: I asked a question in 2009 that nobody had asked before. It turned out to be a very good question, in that it has led to some deep results—at least my collaborators and I think the results are deep! Something else I am proud of is that my niece went into mathematics, getting her Ph.D.  in statistical methods related to public health, specifically water-born diseases. When she was a child we played a lot of math games, like generating sequences of values related to the Collatz conjecture (also called the 3n+1 conjecture), just for fun. I guess it was no surprise that on her first day of university she declared a math major! Still I take some credit for that.

What mathematician of the past has most inspired you?

Julia Robinson. She was a wonderful mathematician, worked on so-called decision problems. She is the “R” of the celebrated MRDP Theorem, which gives a negative answer to Hilbert’s Tenth Problem: is there an algorithm that tells you, if you input a Diophantine equation, whether it has solutions in the integers? I admire her as a person very much. In her public life she was politically active (working on left-wing causes), also her character was very modest. She struggled with all kinds of obstacles, one being that she was in poor health most of her life. But she always met these obstacles with grace and optimism. I highly recommend the biography of her written by her sister, Constance Reid.

Can you describe your perfect day off work?

Do you mean a day off, away from math? Or day of work? A perfect day off work is walking along the coast of Ireland with my husband. A perfect day OF work is making progress on a paper, whether it is by working alone or at the blackboard with my collaborators Menachem Magidor and Jouko Väänänen.

Do you have a message for girls who are mathematics students or are considering to study mathematics?

This is a great time to enter mathematics for women, so don’t hesitate to follow your interest! If you decide to become a mathematician though, please marry somebody who is willing to follow you to YOUR job, not insist that you have to follow them to THEIR job. In my case moving to where my husband’s job is worked out really well, because I had a job (of assistant) waiting for me. But I have seen too many women pass up great opportunities, or not apply for positions they would otherwise be in the running for, because it entails living abroad, and the partner is not willing to move, or because there is a perception that his job is more important. I can say though, that from what I have observed,  young Finnish men are generally very enlightened when it comes to gender equality. And the older ones aren’t so bad either.