Climate CAFE is represented in Sweden by the Swedish University of Agricultural Sciences (SLU) and is involved in activities related to work packages (WP) 1, 2 and 4 which seek to:

WP2: collects, analyzes and synthesizes data from new and old experimental culture system, to synthesize the levers and solutions which could be effective to adapt European culture systems to climate change.

WP4: models and simulates the impact on the agronomic and environmental performance of adaptation strategies to climate change formalized in WP3. The compromise between “mitigation” and “adaptation” will also be evaluated through simulation particularly on greenhouse gas emissions, the budgets of C, N and water.

This year the SLU team has planned several activities to advance the goals of each WP:

In reference to the Swedish Adaptation Pilot and WP1:

A homepage for the Swedish AP has been created: http://www.slu.se/adaptation_pilot_skane

The Swedish Adaptation Pilot is also known as ‘Adaptation Pilot Skåne’ (the name of the region where the pilot is located; Skåne in Swedish, Scania in English). The AP includes a Swedish group of farmers, scientists and other stakeholders engaged in the co-design of cropping systems for improved climate change adaptability.

The main adaptation options in which the Swedish Adaptation Pilot is focusing one are:

The Swedish AP is also preparing a study visit to Denmark with hopes to meet both representatives from the Danish AP and the reduced tillage association FRDK (Foreningen for Reduceret Jordbearbejdning i Danmark).

In reference to WP2:

The SLU team is preparing a manuscript with the preliminary title “Does the inclusion and position of legumes or grass/legume leys in crop rotations affect the yield stability of cereals in the same rotation” in cooperation with Moritz Reckling (ZALF), Anthony Vermue (INRA) and Kairsty Topp (SRUC).

The SLU team has performed water infiltration measurements in one of the Swedish LTEs comparing crop rotations with and without grass/clover leys. And the goal is to provide more data for WP4. At the moment, SLU has delivered data from one Swedish LTE and hopes to deliver from a second LTE in the coming weeks.

How to design a ‘future proof’ farm? This was the central question discussed in a workshop for 20 enthusiastic future farmers (and students from the agricultural school). First, a lecture on climate neutral farming was given, since this is considered a prerequisite for a well-designed future farm. After that, participants envisioned dreams and objectives for their future farm. 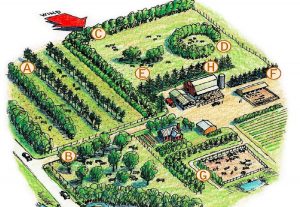 During the workshop, the brainstorming of ideas about future farms was divided in 3 parts:

Diversification was key for most participants: both in species and as sources of income. For example, an arable farmer expressed his intention to shift from mono-culture cereals to strip cropping with bushes and flower strips to ensure biodiversity and shelter for insects. In addition, he would keep sheep for meat as second source of income. 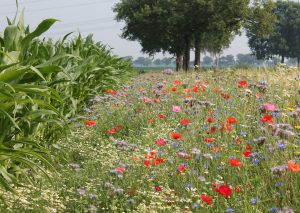 Use of diversity was highlighted as a key to enhance ecosystem services.

Other farmers exchanged ideas on permaculture principles and how to make those principles operational on a bigger scale. Robots were seen as a promising solution to labour constraints. The session closed with a discussion on values: creativity was seen as leading value for a real redesign of agricultural systems. 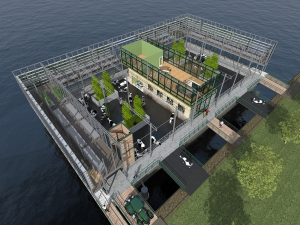 Scheme of a future dairy farm. 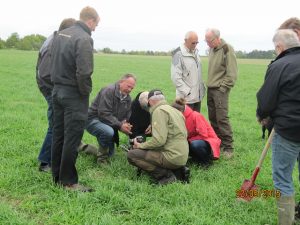 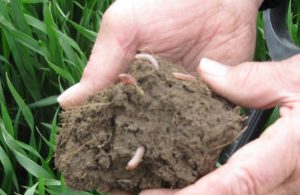 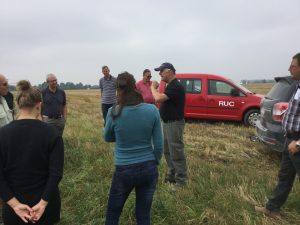 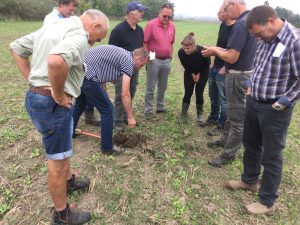 The 14th Congress of the European Society of Agronomy (ESA14) was held in Edinburgh during 5-9 September 2016.

There were a total of 14 different parallel sessions and 7 different options for a field trip during the congress.

Climate CAFE project sponsored one of the parallel sessions titled: “Adaptation to Climate Change” and the project was also represented by two key oral presentations and four poster presentations related to the project.

The first oral presentation was given by Moritz Reckling from ZALF (Germany) titled “Novel approaches to optimize grain legume cropping systems”. Reckling et al. showed the use of the ROTOR model as a tool for estimating the effect of integrating legumes in rotations. ROTOR is one of the key farm level tools that we are using in Climate CAFE, and can be downloaded from the ZALF website along with several other tools for organic agriculture:

The second oral presentation from our team was given by Helena Gómez-Macpherson from CSIC (Spain) titled “Participatory approach for identifying/ prioritizing adaptation strategies to climate change”. The presentation showed the methods that we are using in the Climate CAFE workshops organized in each of the adaptation pilots that are located across Europe.

In addition there were also four poster presentations from the Climate CAFE team:

– “Performance of cover crops and effect on the following crop in a long term tillage experiment” by Lucie Büchi et al. from Agroscope (Switzerland).

As 2016 is the International Year of Pulses the Congress highlighted the role of legumes – both pasture and grain legumes (pulses) the importance of legumes is becoming more and more evident thanks to their role for sustainable local vegetable protein production. Charles Cernay from INRA (France) explained that we should promote other legume crops with higher productivity than pea, such as soybean, narrow leafed lupin and faba bean if we want to make a difference to protein production in European agriculture. While Derrick Moot from Lincoln University (New Zealand) showed how legumes such as lucerne and clover can help to create drought-proofed landscapes, which is of great importance under the current climate change.

Another important topic during the ESA14 congress was the role of modelling tools for the design of sustainable agricultural systems and to understand how crop production will be affected by the extreme weather events that may occur as a consequence of climate change. D. Dumont from Gembloux Agro-Bio Tech (Belgium) advised that models need to be run in sequential mode to account for any carry-over effects and S. Asseng from The University of Florida (USA) suggested a multi-model ensemble was important to achieve best predictors across environments under climate change. Accordingly, The Climate CAFE project is making use of a wide set of models that include: STICS, RECORD, FarmDESIGN, DAYCENT and MODAM.

Other current key issues for European Agriculture were featured in the presentations of M. Rufino from Lancaster University (UK) and Paolo Barberi from Scuola Superiore Sant’Anna (Italy). M. Rufino questioned how practices at farm level may cause land use change and their role in climate change mitigation. In addition, Paolo Barberi highlighted the increase of agricultural land abandonment in Europe, and the need for more diversity at all levels to increase the sustainability of agriculture and food systems.

Along with the scientific talks, there was also time for field trips to get acquainted with Scottish farming systems and see what techniques farmers are currently using to achieve sustainable farming. For example, Colin Hunter farmer at Stonelaws showed his interest in Conservation Agriculture, and how the use of cover crops and reduced tillage have helped him to improve the soil structure on his farm. 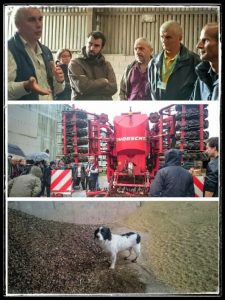 On the fourth day of the congress there were 7 different field trips. Here are some images from the inspiring visit to Stonelaws farm where we got insight from the farmer Colin Samuel and a seed merchant, about conservation agriculture using techniques such as minimum tillage and a variety of cover crops.

Last, but not least, since the congress was held in Scotland and coincided with Scottish food and drink fortnight, which “promotes Scotland’s produce and the people who grow, make, cook and sell it”; all the participants at ESA14 had the chance to get a taste and learn more about Scottish traditional produce such as salmon, haggis, and whisky. Bill Thomas from The James Hutton Institute gave an entertaining talk about growing barley for whisky and then a whisky tasting showcasing 9 different whiskies. 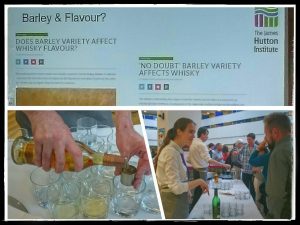 The third day of #ESA14 congress was a busy day discussing #modelling tools and novel management approaches to deal with the effects of #climatechange on cropping systems.
As reward we finished the day by learning about whisky production and also had some whisky tasting thanks to The James Hutton Institute

The productive ESA14 Congress was closed with an amazing dinner at The National Museum of Scotland. Excellent Scottish food and bagpipe band!

On 29 January, the first meeting of the Adaptation Pilot (AP) Finland took place, for a Climate CAFE workshop where farmers were able to discuss and identify the key issues and potential strategies of Finnish agriculture under climate change.

Climate change forecasts have identified several transformations in Finnish climate, but the main risks for agriculture will be caused by:

The farmers identified what they felt were the key issues and questions for Finnish agriculture under climate change, and what could be the potential adaptation strategies for the forecast climate change scenario, and discussed which among those would be the most feasible. 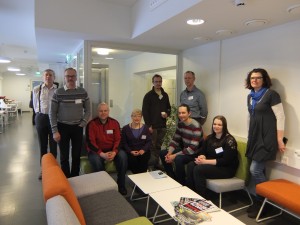 The farmers saw water management as a key question: how to deal with the excess in winter without running into deficit in the summer. Many aspects of soil structure, particularly soil organic matter content, can be used as tools to manage water balance.

Moreover, the rental of fields is another important issue of Finnish agriculture. Farmers rent fields from other farmers, usually those who develop their farm and make investments rent from those who have given up practical farming but are not willing to sell their land. The users of the land, in this case, have little concern about its future, so they are unlikely to invest in it, in contrast to the land that they themselves own, while the land-owners are equally unlikely to invest in it since they will not see much financial benefit from it.

Overall, the maintenance and improvement of soil structure through maintaining crop cover, improving drainage systems and addition of organic matter are the main identified feasible strategies for farmers to adapt to climate change events (drought, floods, etc.). In addition, the short-term nature of field rental contracts is the main barrier for soil improving activities, because it makes no sense to make new sub-drainage or other soil improving activities if you can’t be sure that you will continue to cultivate the field after five years.

To bridge the gap between research, practice and policy, the EU Climate CAFE project has set up a network of 10 “adaptation pilots” in the 8 European countries involved in our project. 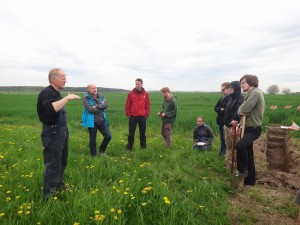 For each AP, information will be collected on soils and climate, farms and their current and possible production activities, and institutional drivers of land use. Local and scientific literature will be complemented with surveys into an ecological description of the area, and validated at stakeholder meetings.

A participatory learning and action (PLA) process will be built to identify and prioritize the major climate change adaptation goals of the stakeholders. Surveys, focus group discussions or PLA workshops will be organized to collect information, and priorities of CC adaptation goals will be identified.

Options for CC adaptation that are already tested by farmers, such as in the ZALF Adaptation Pilot, or in on-station experiments will be used to support model-based results by providing practical examples.