The groups for the season 2019–2020 began their journey at the end of November.

The University of Helsinki’s group mentoring programme brings alumni and students together already for the ninth time. On 20 November, 28 enthusiastic groups set off on their joint mentoring journey in Minerva Plaza at Siltavuorenpenger.

The kick-off event of the ninth group mentoring programme was held in the traditional manner in late November. This time the event was arranged in Minerva Plaza, where the groups gathered to plan their six-month journey together.

In all, 107 students and 28 mentors took part in the event. Each group, consisting of two to four student actors, is mentored by one alumnus or alumna of the University of Helsinki. This year the programme is part of the International Talents Boosting the Growth of Companies –project, which is why the number of English-language groups was increased to four. One of the groups works in Swedish.

New kind of orientation for the groups

The support material provided for the mentoring groups was revised this autumn based on the feedback from previous years. As in previous years, the participants had the opportunity to familiarise themselves with the Workbook for Mentoring  produced by the University of Helsinki before the kick-off. New preliminary materials for actors and mentors included mentoring-themed orientation videos produced by Tevere Oy.

“It is our aim to provide the participants with materials that are as comprehensive as possible in advance, since it is good to give these types of things time to simmer,” says Johanna Ruhanen from Career Services.

Minna-Rosa Kanniainen talked about the meaning of communication in her presentation at the kick-off -event.

Aside from practical tips, the programme of this year’s kick-off event was built on an expert presentation from Minna-Rosa Kanniainen (Lifedesign). In her presentation, Kanniainen, who previously worked with the group mentoring programme for many years, focused especially on the interactive perspective of group-based mentoring. She, for example, emphasised the crucial significance of listening and mutual respect in group meetings and encouraged actors to be active at all stages of the process.

As a concrete tip, Kanniainen reminded the participants about making a conscious effort to replace “no, but…” comments so easily escaping from our lips with “yes, and…” The latter will almost automatically move discussions in a positive direction.

During the kick-off event the groups, of course, had the opportunity to get to know each other and create shared guidelines for mentoring. The groups were in fact tasked with drawing up a written mentoring agreement on their expectations and goals related to the process. 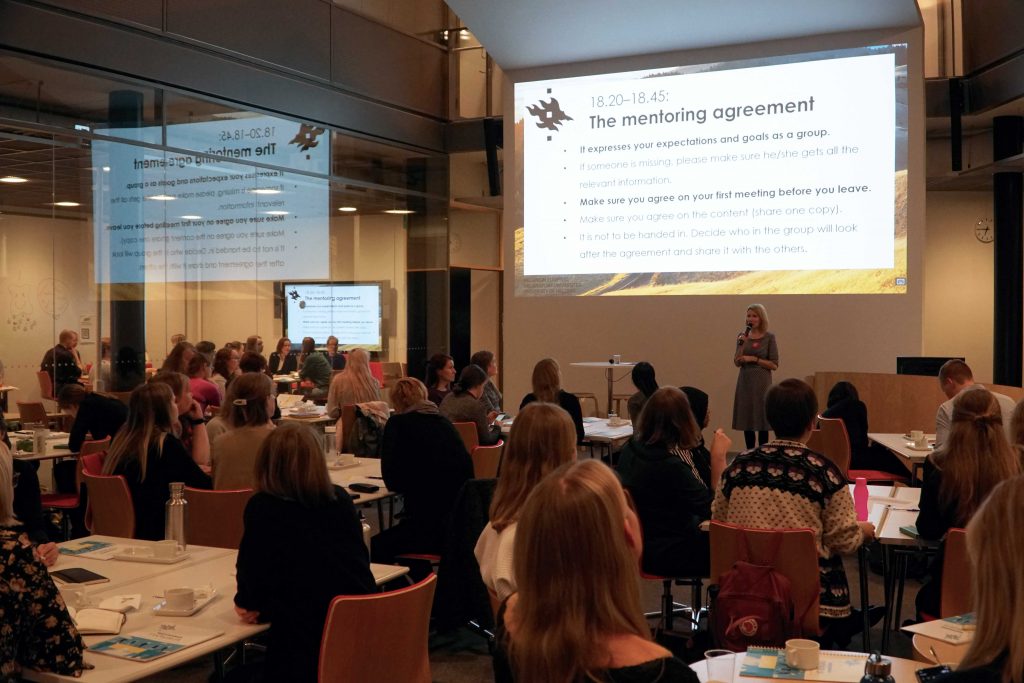 The journey continues up until the summer

The groups will continue to work independently for about six months. It is recommended that the groups meet approximately once a month.

“We will organise an interim meeting for the mentors midway through the period, where they get to share their experiences from the first months of mentoring. Traditionally, the interim meeting has also been a good place to get new ideas for the activities of the groups,” says Ruhanen.

In May, all the groups will return to the starting place Minerva Plaza for a joint wrap-up session. Then they will have at least 28 unique mentoring stories to share.

The next mentoring period will be announced on this page in early autumn 2020. The mentor recruitment will begin in September.