The mentors gathered at Think Corner.

An intermediate meeting for mentors marked the midpoint of the 2019–2020 group mentoring programme.

At the end of February, mentors met at Think Corner to discuss their experiences of the first group meetings and to share good practices.

The meeting began with a talk by Leena Itkonen, a career counsellor at Career Services, regarding the support provided by the University for students’ career planning both now and in the future. Itkonen shed light on the significance of, for example, career courses, traineeships, portfolio work and career events for students’ career planning. Group mentoring is another important tool used for this purpose.

“At Career Services, we are adopting a new theoretical framework in which career skills are analysed through five different types of capital acquired during studies. These types of capital encompass, for example, networking, getting to know various actors in the field, understanding the cultural codes of various organisations and making career plans. Mentoring can play a key role in all these areas,” Itkonen noted. 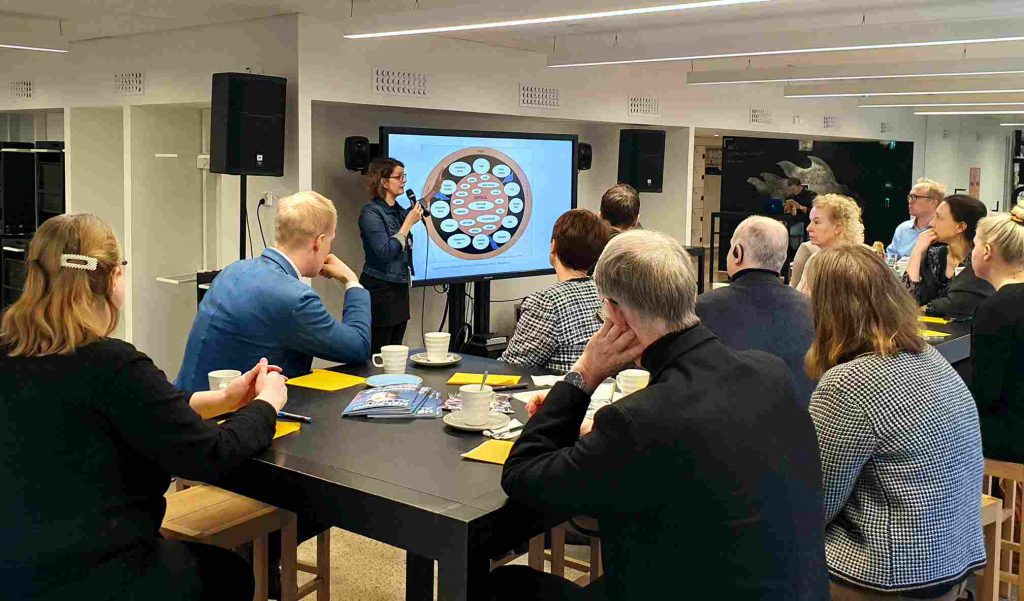 DIVERSE PRACTICES AT THE FIRST MEETINGS

The overall impression of the first group meetings had been positive. The mentors praised the active and enthusiastic efforts of the actors. However, they also stated that the students interested in mentoring may be the most active in general, and the challenge is how to encourage those who are less active to take part.

Many mentors said that their role had primarily been that of leading discussions because their actors were no longer at the beginning of their education or career. This meant that the strength of group mentoring, peer support between the actors, was emphasised.

The Workbook for Mentoring, now used for the third time, had also been useful.

“The workbook has helped me plan the meetings,” one of the mentors said.

As in previous years, the practices of the mentoring meetings had varied. Some of the groups had visited the mentor’s workplace, whereas others had focused on discussing careers and job seeking. As before, the content of the meetings had depended on the goals set by each group.

FROM JOB SEEKING TO CAREER REFLECTION AND THE ROLE OF MENTORING

Several groups had discussed the following fundamental topics: what is a career and how do you get one? How do you create networks? How should you approach job seeking?

“The actors are interested in how to get their foot on the career ladder,” said one of the mentors.

Johanna Ruhanen of Career Services reminded the mentors that they do not have sole responsibility for providing advice on job seeking.

“Students can use, for instance, the Career Services’ Job Seeking Guide and the various workshops focusing on job seeking and LinkedIn. We also try to actively communicate about these tools to students,” she said.

The meetings had also given a lot to the mentors themselves.

“I have received feedback directly from my actors on the impact of my job, which I maybe was unable to think about in the same way before,” one of the mentors commented at the meeting.

The mentors’ understanding of the practical significance of mentoring had also increased, and their participation had inspired their friends and acquaintances to get involved in similar activities.

“An important insight for me has been that mentoring is not just something you do in your own time. It also entails a responsibility for the impression you give of the job market, so you must take it seriously,” one mentor remarked.

THE SPRING MEETINGS AND THE WRAP-UP SESSION MOVED ONLINE

The group mentoring programme will continue in the spring with group-specific remote meetings. The programme will conclude on 18 May with a joint closing session held online due to the coronavirus situation. New mentors will again be sought in early autumn, and students will have the opportunity to apply for the programme no later than October 2020. Stay tuned!