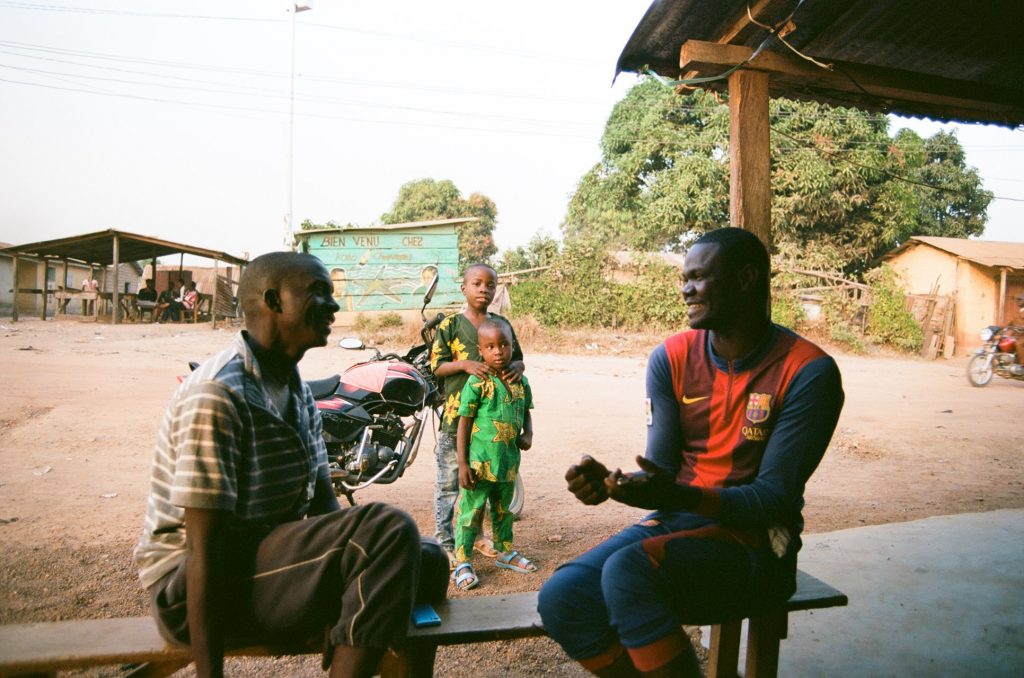 My current research project at the Helsinki Collegium for Advanced Studies focuses on language contact in its social context and uses a variety of methods, including participant observation, corpus collection, and experiment. I address contact from two main perspectives:  multilingual language socialization in the family and in the community and contact and language change fueled by religious conversion. My main empirical focus is contact between the Mano and the Kpelle languages of Guinea. The project is supported by a grant from the Kone foundation, Finland.

The initial stage of this project (from 2015 to 2017) was supported by a two-year postdoctoral fellowship from the France-based Fondation Fyssen, which had brought me to the Department of Anthropology at UC Berkeley. A comparative and theoretical project on the topic of the role of (religious) translation in language and culture contact was run in 2017 and 2018 and was also supported by the Fyssen.

Multilingualism and language acquisition at home and in the community

Mano is a minority language in Guinea. Many of its features,  including phonology, basic morphosyntax and vocabulary, were shaped by contact with a wider-spoken language, Kpelle, as I show in an article on dialectal variation and in several other publications focusing on specific areas of morphosyntax shaped by contact: bringing and inclusory constructions. But how does that contact operate in real life?

With Dr. Maria Konoshenko, we conducted a sociolinguistic study of patterns of multilingualism in Guinea, where we show that while all Mano speakers we interviewed have Kpelle in their repertoire, fewer Kpelle speak Mano, so bilingualism in these two languages in asymmetric. In addition, we showed that in situations of ordinary everyday interaction between speakers of Kpelle and Mano, Kpelle is often preferred over Mano. The article appeared in the Special issue on “Typology of Small-Scale Multilingualism” edited by N. Dobrushina, O. Khanina, B. Pakendorf of the International Journal of Bilingualism. Our next step is to develop our findings in several ways, including a more detailed ethnography and an acquisition study. Email me for more detail!

​Through a study of parallel and non-parallel texts produced in the Catholic context in Guinea I came to a conclusion that Mano spoken by the Catholic community in Guinea is strongly influenced by the language of the ecclesiastic authority, the Kpelle, which was in turn shaped, on the one hand, by the missionary language prescription, and on the other hand, by the underlying influence of Maninka, the language of Muslim neighbors of Kpelle. Some Arabic borrowings covered thousands of kilometers, first adopted by Soninke, then Maninka, then Kpelle and then Mano. Thus, the word kalan ‘Christianity, prayer’ used in both Mano and Kpelle turns out to be a cognate of the word Qur’an. This study allows to rethink the Christian vs Muslim opposition and at the same time to relativize the role of European missionaries in the Christianization of the language. A paper on that topic was published in Cahiers d’Etudes Africaines.

I am also interested in the broader theoretical and comparative question of the role of religion and translation in language contact and change. I am currently editing a special issue of the International Journal of the Sociology of Language. I develop this topic in several other publications: one, appeared in Texas Linguistic Forum in 2017, addresses the role of religious translation and religious registers, and another, published in Annales de la Fondation Fyssen in 2018, studies language and culture contact from the point of view of specific social situations where it occurs, including, but not limited to, religious conversion.

Documentation and description of Mano; typology; grammar in interaction

My Ph.D. dissertation, A grammar of Mano (Southern Mande) in a typological perspective (in French), was based on eight months of fieldwork between 2009 and 2014. It was defended at INaLCO with highest honors. In 2015, I published the descriptive part of my Ph.D. dissertation as a special issue of the peer-reviewed Mandenkan journal specialized in Mande studies. A typological portrait of Mano appeared in Linguistic Typology. I have published several papers on the most intriguing aspects of Mano grammar and keep a strong footing in descriptive, typological and interactional linguistics.

​I am very interested in the study of grammatical semantics and pragmatics of deictic categories deployed in natural speech, especially the demonstratives. Against the common assumption that the spatial function of demonstratives is primary, while all other functions are a result of a metaphoric extension, I support a lesser-known argument that space in many languages, including Mano, just one of the dimensions of access to objects, which may include other perceptual media, but also cognitive access. I focus on the so-called recognitional function, where a demonstrative serves to refer to objects that are not present at the interactive scene and not mentioned in prior discourse but available to the interlocutors by virtue of them sharing a common ground. I argue that recognition plays an essential role even in reference to the objects on the interactive scene and may structure the paradigm of exophoric demonstratives (those referring to objects as part of the common ground and those that do not). A paper on that topic has recently appeared in a special issue of Frontiers in Psychology coordinated by Holger Diessel et al. The role of recognitional deixis in building a social community of Mano Catholics is addressed in an article published in Signs and Society in 2019.

Among recent works is a study of the inclusory construction in Mande languages. Inclusory constructions are attested in many languages of the world, including Russian, Finnish, Polish, some French dialects, but also Zapotec and many languages spoken in Australia. An example is the title of the novel by François Caradec Nous deux mon chien (which is also the title of Agatha Christie’s Next to a Dog translation into French). While literally, nous deux mon chien could be translated back to English as ‘us two my dog’, it means ‘my dog and I’. The pronoun nous ‘us’, which stands for the entire group of participants, is called in the literature an inclusory pronoun. Some Mande languages are typologically unique, because in these languages the inclusory pronouns constitute a separate pronominal series which is used nowhere outside the inclusory construction. In a paper published in Folia Linguistica in 2019​ (submitted version) I explain how these constructions work in eleven Mande languages and trace their historical development.