Individual’s linguistic abilities do not exist in a vacuum, but are shaped by their environment. Even monolingual Finnish speakers will run into new linguistic forms in slang or jargon, which then can make their way into person’s language. Multilingual individuals have multiple different languages which shape their own language use and in extreme cases, people can stop using a language or another. In trying to see if there had been such language shifts or changes, questionnaire contained questions about languages which our consultants used with their their parents, siblings, spouses or partners, and children.

All consultants used one of their mother tongues with their parents. With their siblings, there were some shifts. The differences are not entirely accurate as not all had marked the languages in the second spot (now), which could have been interpreted as that there had been no change, but since this was not made explicit, the answers were marked N/A during analysis. In the graph below, you can see that languages like English, Finnish and German have entered the repertoires of the speakers, whereas languages like Albanian, Kurdish, Arabic and Vietnamese have disappeared. This is most likely explained by the fact that within these groups there were many consultants who had moved to Finland in their childhoods and received their full education in Finnish school system. German is explained by one consultant who had moved to Germany as a child.

The second most important drive for individual’s language use is most likely the language which they use with their partners and spouses. 52% percent were able to use one of their mother tongues with their partner, 24% could not and 24% did not have a partner or did not answer the question. The most usual common languages between partners were English and Finnish, but French, Arabic, Swedish, Hindi, Russian and Turkish were also mentioned.

With their children majority could use their mother tongue (92%), though it is good to remember that this question applied only to less than half of the consultants. Those who did not use one of their mother tongues with their children typically spoke Finnish, English, or combination of both with them. These consultants already had been living in Finland for significant amount of time, over 20 years.

As mentioned in the section ‘Consultants’, the consultants were often young, so the question about grandchildren was most often irrelevant. For the 5 consultants to whom this question was relevant, most (4) could use their mother tongue with their grandchildren.

Passing down the language

Questionnaire also asked about peoples’ aims in passing down the language, that is, what languages they are planning on teaching their children. Since most of the people did not have children, the results involve a lot of hypothetical situations.

Once again, the students and consultants had the possibility to agree and write the answers in the order they wished. The order of languages does not necessarily reflect the languages which they have marked as their mother tongues, though most often language A was the same.

The above graph shows that most (96%) of those who answered, are going to pass down their mother tongue to their children. Mother tongues which people were not planning to pass down to their children were: English, Catalan, Vietnamese, Visaya, Ukrainian, Estonian, Bikol, Cantonese, Yoruba, Mandinka, Karelian, Kurmanci, Wolof. Other languages which people had written down as they would not be teaching their children were: Finnish, English, Russian, Swedish, Pashto, Danish and Hindi. Finnish and English were often explained by consultants by saying that they would not need to do so as the children would learn them in school or from the environment anyways. Hindi, Pashto, Russian, and Swedish were languages which the consultants had learned in school and which were not important in daily life nor to family roots. This is most likely why the consultants did not feel the need to pass down those languages.

The support for one’s mother tongue can also been seen in the number of answers which were given to the question how people were planning to pass down the language to their children. The total is the highest with language A and lowest with language C. Language B had the most answers for encouraging formal study. Language B was usually Finnish (35%) or English (17%). For language C, English was the largest language with 24% and Finnish 20%, 45% N/A. The most common way to answering to Language A was to tick all of the boxes except other way. Thus it is not sure how much planning went into the answers; consultants might have been just deeply invested in the child’s language education. As one Vietnamese speaking consultant put it after leaving out the ‘encourage formal study box’: ‘It is parents job to teach the language’.

The ‘other ways’ category provided to be fruitful even though quite a few answers repeated methods which were considered to be included in the other options. Most significant theme in the comments made by the consultants was about how children would learn the languages in households where parents spoke different languages. 15 consultants noted that the responsibilities would be divided so that one parent would only speak one language, even if they could speak the partner’s language as well. This might been because of uneasiness of own skills. For example, one Russian speaking consultant noted that they were afraid that their children would learn their mistakes in Finnish, which caused them to only use Russian with their children.

The consultants were asked if they would try to make their children learn any other languages. Surprisingly, English, Swedish and Finnish were the top languages in this even though English and Finnish also were those which were chosen not to be taught by consultants themselves. This might just reflect the different demographic groups of those who had grown in Finland and those who had come here later.  Otherwise, the amount of answers for teaching children were surprisingly low (55% N/A). Some had noted that they wanted their children to learn different languages, e.g. “European languages” or just many different languages. Others had taken into account current or hypothetical partners’ language. Nevertheless, more often it seemed that three languages were enough for the consultants. No answers were ‘this will be an important language in the future’, though Arabic, Spanish, and Chinese are all major languages in the world by number of speakers. 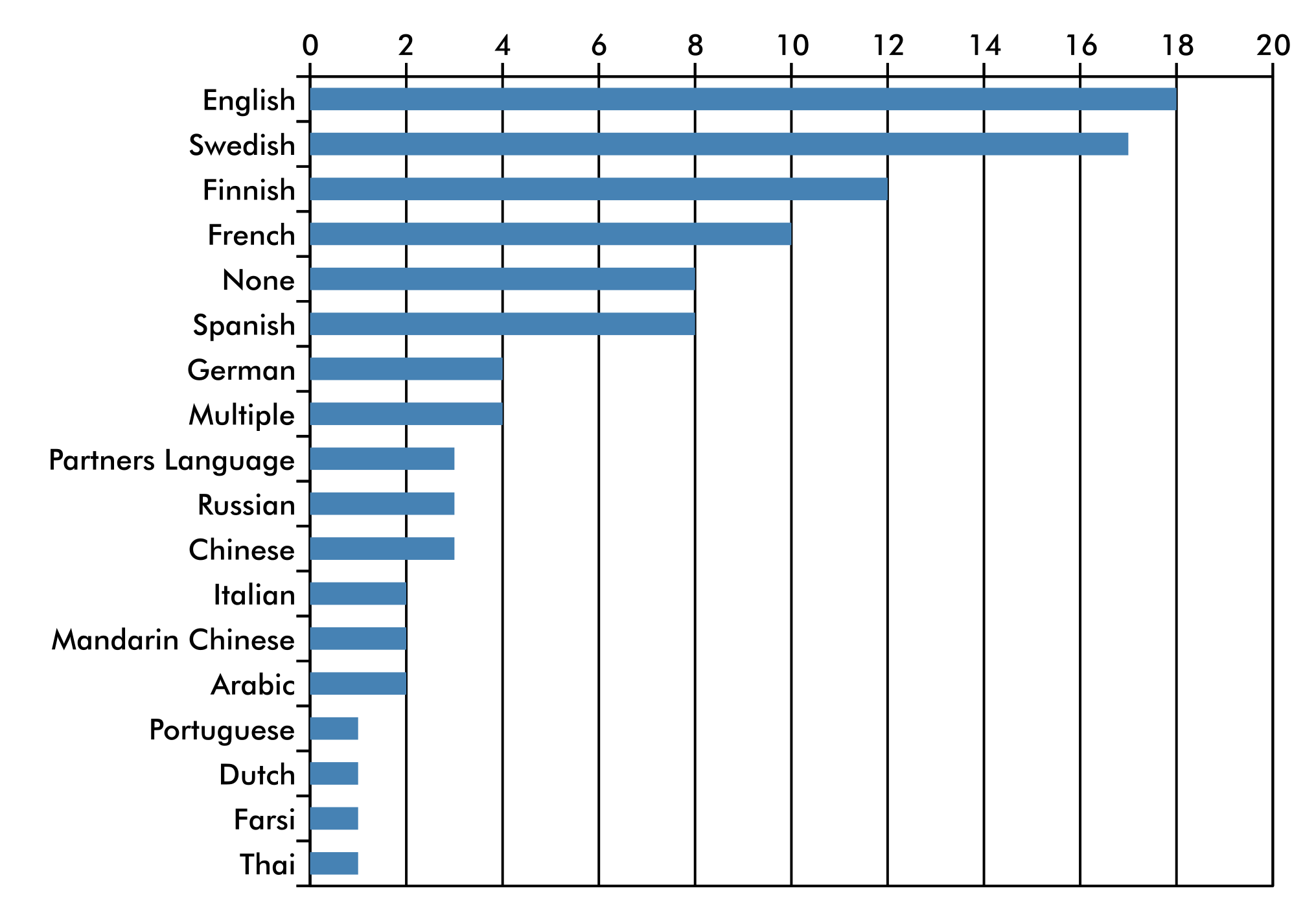 Consultants were also asked what languages they themselves wanted to learn. The most ‘desired’ language was Spanish. It was not much more common than the desire to improve old ones. The appeal to learn Spanish can be explained by the view that the language is “easy and fun” as one consultant said or this perhaps made it easy to give it as an answer. Of course, consultants could have been aware of the global spread of the language. Second most popular answer was to improve old ones, e.g. noting that they wanted to focus on Finnish before learning other languages. Otherwise the languages, which consultants wanted to learn were large national languages with a lot of speakers, though exceptions such as Esperanto were mentioned. Also, languages such as Quechua, Kikongo, and Tatar might seem ‘exotic’ and small, but these three languages all have millions of speakers.