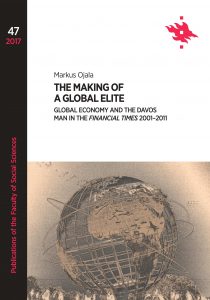 Recent decades have seen an increase in the number of policy-planning groups, think tanks, clubs, conferences and retreats whose members and participants mainly comprise executives of transnational banks and businesses, political leaders and officials from state agencies and international organisations. In addition to such exclusive meeting places, there is a variety of international media outlets and publications targeting these groups of influencers and focusing on issues pertaining to the operation of the global economy. In my doctoral dissertation The Making of a Global Elite: Global Economy and the Davos Man in the Financial Times 2001–2011, I argue that these forums and media contribute to transnational elite formation by bringing elites together across institutional and national boundaries and by facilitating the formulation of shared ideas and policy objectives in common private and public spaces. Defining these institutions and processes for international business-policy interaction as transnational elite communication (TEC), the study examines their relevance for global economic governance. The specific focus is on the World Economic Forum and the Financial Times (FT) as forms of TEC.

Theoretically, the work carves out a niche at the intersection of elite studies, global political economy, and communication and media studies. Firstly, the study draws particularly on C. Wright Mills’s concept of the power elite, which provides a critical view of how societal transformations and institutional connections can pave the way to the concentration of power in society and to the formation of an increasingly integrated elite. Secondly, the perspective of global political economy informs that efforts to incorporate political and business elites on a transnational basis into a common field of global economic governance are an elementary aspect of managing an increasingly globalised and financialised capitalism. It also suggests that the historical process of integration is deeply rooted in political-economic power relations and that it has been shaped most significantly by the US state and US-based transnational corporations, which have been in dominant positions in the global political economy after World War 2. Finally, the perspective of communication and media studies highlights the importance of culture, identity and the public sphere – as a domain of associational life and discursive practice – in transnational elite formation. The theoretical exploration thus develops into an inquiry into the concentration of power in the global political economy; into the role of elites from the fields of business, politics and administration in shaping the processes of global economic governance; and into the efforts of US and western elites to incorporate non-western elites into these institutions and collective practices of governance. The study argues that observing the forums and media of transnational elites complements analyses of political and economic power in the global context as it sheds light on the kind of hegemonic processes concerning the ideas, identities and interests that inform elite agency in the global political economy. The practices of TEC enhance the potential of elites to bridge divides, formulate common outlooks, negotiate shared goals and organise themselves as a collective agent in the pursuit of those objectives.

The empirical analysis focuses on the FT coverage of the World Economic Forum’s annual Davos meetings from 2001 to 2011. The qualitative text analysis is informed by the perspective of sociological or discursive institutionalism and draws specifically on the notion of epistemic work. The latter posits that actors appeal to world-cultural ideas, including ontological assumptions, actor identities, and values and ideals, when articulating their goals and attempting to convince others of their soundness. Accordingly, the analysis observes FT journalism as a form of epistemic work as it takes place around various concrete issues that the corporate professionals, political decision-makers and international officials debate at the Davos forum. The analysis indicates, firstly, that the global economy occupies a central place in elite ontology and is discursively constructed as an interdependent system and an object of governance, and that financial markets appear principally as a functional, even though inherently unstable, element in the global economy. Secondly, FT journalism articulates the transnational elite as an actor identity, presents Davos attendees as its representatives and supports positive identification with this elite among its readers. And thirdly, globalisation emerges in FT-mediated TEC as a prevalent idea that informs elite agency and is positively connected to the values of growth and liberty. In this way, liberal internationalism is associated with universal interest and articulated with the idea of historical purpose that unites transnational elites behind a common political project.

The PhD dissertation was defended at the University of Helsinki on 28 April 2017. The thesis was also published online and can be accessed here.

The study received a fair amount of media attention nationally upon publication. Below is a selection of stories published in leading Finnish political and business media: