by Timo Laine and Maria Virtanen

Finna.fi, a service offering diverse material from Finnish archives, libraries and museums, published its API, api.finna.fi, in February 2016. The API provides unrestricted access to the metadata of over 9 million records under the CC0 licence, which enables open use. This is the largest amount of Finnish cultural data ever offered. 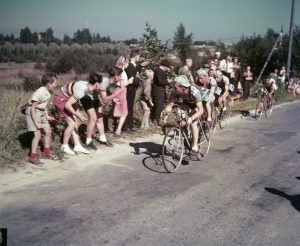 The openly licensed images include a host of interesting items, such as photos of the Helsinki Olympic Games, toy collections shedding light on the history of childhood, visual material on Finnish saunas and sauna culture, church art and numerous images related to war history.

The new API provides application developers, researchers and others access to content that was previously available to end users through the Finna.fi browser interface. The API provides programmatic access to the content, which enables it to be used in programmes and applications, limited only by the users’ imagination. Game developers could create mobile games delving into our cultural heritage, information designers could literally open new views into millions of metadata records, while digital humanities professionals could apply computational methods to their research object. What is more, the API is actively promoted at hackathon events, such as Hack4Fi and Helsinki Digital Humanities Hackathon.

The National Library of Finland is an open organisation, which plans its operations jointly with its key interest groups. Openness is also one of the five core strategic principles that the National Library and its partners follow in Finna’s development. The new API is an important part of these long-term efforts. Not only does it enable anyone to use the data, it also creates the technical prerequisites for novel forms of cooperation and development.

Since the API is fully documented, the National Library’s cooperation partners and customer organisations can more independently integrate Finna content into their own systems. At its simplest, this means richer and more usable services for end users. In addition to small-scale integrations, cooperation partners can develop services and tools around the data offered by the API. The field of learning is a case in point: the National Library’s cooperation partners are using the API to incorporate Finna content into digital learning environments and support its use in teaching.

The Finna.fi metadata has been made available using the CC0 Universal Public Domain Dedication. The visual material provided through the service can be used under different kinds of Creative Commons licences. CC0 is a straightforward and widely used licence for open metadata. It has been used by the European Library, the British Library, Europeana and the Harvard Library. CC0 removes obstacles to data use, as users can combine data from different sources without having to worry about their right to use the data.

Timo Laine is an Information Systems Specialist and Maria Virtanen a Planning Officer at the National Library of Finland.