June 2016 marks the centennial of the birth of Finnish philosopher Georg Henrik von Wright (1916−2003). The anniversary is celebrated with books, seminars, lecture series and concerts, but perhaps the most high-profile event is the Thought and Prophecy exhibition, which opened on 8 March in the National Library of Finland’s Rotunda annex and takes a comprehensive look at von Wright’s life from childhood onwards. 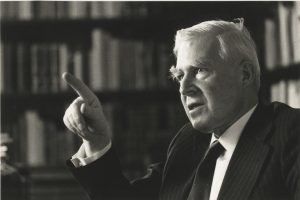 The exhibition features a unique collection of photographs, letters, books and objects that have been collected from a number of sources to shed light on von Wright’s life and philosophy. Several rare pieces have been selected for display from the University of Helsinki’s von Wright and Wittgenstein Archives and the Bibliotheca Wrightiana of von Wright’s correspondence and scholarly home library, which is stored in the National Library’s special collections. The exhibition organisers received invaluable assistance from Georg Henrik von Wright’s children, friends and colleagues, the Christine and Göran Schildt Foundation and the Ella and Georg Ehrnrooth Foundation. A collection of articles entitled Georg Henrik von Wright – Filosofin elämä – En filosofs liv – A Philosopher’s Life has also been published in conjunction with the exhibition.

Georg Henrik von Wright was born in Helsinki, spent his childhood in Finland, the United States and Italy, studied at the universities of Helsinki and Cambridge and became world-famous as one of the most notable philosophers of the 20th century for his research focused on logic and analytical philosophy. He was also active in many other areas. His academic activities in the field of philosophy also involved ethics and moral philosophy, activity theory and the philosophy of science, the philosophy of mind, the philosophy of law and research on Wittgenstein. In addition, he established connections between different philosophical traditions. For example, his work Explanation and Understanding (1971), which explores differences between explanations in the natural and human sciences, is considered a bridge between the Anglo-American analytical and the Continental European hermeneutical philosophy.

In the 1940s von Wright studied at Cambridge, where he became friends with the renowned Austrian philosopher Ludwig Wittgenstein. In 1948 von Wright, just 31 years old at the time, was invited to succeed Wittgenstein as professor of philosophy at the University of Cambridge. Three years later, he returned to his previous professorship at the University of Helsinki. During his years at Cambridge, von Wright got to know not only Wittgenstein, but also many other eminent figures in his field, such as G. E. Moore and C. D. Broad, and rose to prominence himself. Thanks to Wittgenstein’s influence, von Wright abandoned the logical empiricism represented by his Finnish teacher Eino Kaila, but he retained his active interest in using the tools of logic to resolve philosophical problems.

Von Wright returned to Helsinki in 1951, which was a crucial year for his subsequent philosophical career in another way as well. It was the year Wittgenstein died, entrusting his literary estate to von Wright and two other former students, Elizabeth Anscombe and Rush Rhees, on the condition that they would publish what they saw fit. The estate proved to be highly extensive, diverse and fragmented. For decades, the collection, organisation, investigation and editing of the material constituted a significant part of von Wright’s philosophical work. Thanks to these efforts, he is an unsurpassed classic in research on Wittgenstein. One example of his work directly relating to Wittgenstein is Wittgenstein, published originally in 1982 in English and since then translated into German, French and Italian.

After his years at Cambridge, von Wright extended his influence to North and South America. He visited several leading US universities, but his intellectual strongholds were Cornell University and the University of California, Los Angeles (UCLA). He spent over a decade as visiting professor at Cornell, which in a sense became his third academic home alongside Helsinki and Cambridge.

In the 1950s von Wright’s research on philosophical logic ushered in a new period of research on the logic of norms. Von Wright understood that the concepts of ‘necessary’, ‘possible’ and ‘impossible’ followed the same laws as the basic logical operators of ‘everything’, ‘something’ and ‘nothing’. In practice, he succeeded in demonstrating that normative concepts also comply with the rules of logic. Applications of this basic insight proved useful tools particularly in philosophy, law and activity theory. The logic of norm, action and change dominated von Wright’s philosophical work in the 1960s and also brought him fame in South America, especially Brazil and Argentina.

Alongside his academic career in philosophy, von Wright was an active critic of contemporary society, with a high public profile particularly in the Nordic countries. For example, the public twice voted him as Finland’s leading intellectual in polls organised by the Helsingin Sanomat newspaper. His humanist social criticism – or “participatory provocative pessimism”, as he himself called it – originated in an article on the Vietnam War and the United States’ involvement in it, which was published almost simultaneously in 1967 in Finland, Sweden and Denmark. Through the following decades, von Wright publicly criticised, for example, the exploitation of the environment, nuclear power, several military operations and the belief in the omnipotence of technological and scientific achievement. He believed that Western culture had not yet properly understood the serious consequences of its irreversible regression.

Von Wright’s new role as an active social critic clearly affected his philosophical work, but he wished to keep the two areas separate. His world-view was also shaped by his keen interest in music, literature and theatre. His favourite composers were Schubert and Beethoven, whom Wittgenstein also happened to admire. He treasured a number of classical authors from Germany (Goethe, Schiller, Heine) and Russia (Tolstoy, Dostoyevsky), but was also more broadly interested in “all great literature from Homer to Väinö Linna”, as he put it in an interview with Suomen Kuvalehti magazine in 1961.

Von Wright was an avid theatre-goer and enjoyed spending time with theatre professionals. His book Vetenskapen och förnuftet (in Finnish: Tiede ja ihmisjärki) influenced director Ralf Långbacka’s version of Bertolt Brecht’s play Life of Galileo, and in 1991 von Wright commented on genetic engineering in the programme of the play Maries barn at the Lilla Teatern theatre. In the late 1980s, von Wright chaired the board of Lilla Teatern for a few years. At the very beginning of his academic studies, he had embraced logic as his field of choice, but as he comments on this choice in his memoirs: “Had I chosen psychology, I would hardly have become a major psychologist. However, it is possible that my artistic interests, primarily literature, would have achieved their full potential in my later scientific life.”

In the early 1960s, von Wright was appointed as a member of the Academy of Finland, which was then a collegium of 12 academicians of science and art. At the end of that decade, he had the questionable honour of being the last person to lead this institution. He considered the task the most difficult of his career, saying that it reminded him of the work of an undertaker, because President Urho Kekkonen wished to abolish the Academy and use other means to promote Finnish science and art. The decision to abolish the Academy was eventually made in January 1970, when a new government organisation was established to provide funding for basic scientific research. The old name ‘Academy of Finland’ was retained, and the previous academicians were allowed to continue to work under appropriate conditions. Georg Henrik von Wright formally retired in 1986, but in practice he continued to work actively at the University of Helsinki until the end of his life.

Towards the end of his career, von Wright’s philosophical interests focused on the philosophy of mind. However, in his very last writings, he discussed matters related to activity theory, the philosophy of Ludwig Wittgenstein, values and other basic issues of ethics and morality. He considered his 1996 work Six Essays in Philosophical Logic as the culmination of his career in logic.

Two years before his death, von Wright donated his Wittgenstein archive to the University of Helsinki. It remained an incomparable research resource until Oxford University Press published all Wittgenstein resources in digital format in 2000. The materials donated by von Wright currently constitute the core of the von Wright and Wittgenstein Archives placed at the University of Helsinki’s discipline of philosophy and are actively used by researchers. In addition to the Wittgenstein materials, the archives contain part of von Wright’s own written estate, an extensive collection of his works published in various languages as well as his other writings, photographs and memorabilia. The archives were considerably supplemented in 2002 when von Wright donated his scholarly home library and correspondence to the University. The library takes up more than 100 metres of shelf space and include several rare works, whereas the correspondence comprises close to 16,000 letters and postcards, mostly in Swedish, English, German and Finnish, as well as many copies of letters sent by von Wright himself. These fully catalogued collections are available to researchers at the National Library of Finland, where they are kept in the same order as they were in von Wright’s long-time home in the Eira district of Helsinki at Laivurinkatu 4. Both the von Wright and Wittgenstein Archives and the Bibliotheca Wrightiana are extensive and exceptionally well-organised philosophical research resources.

The wall of the building on Laivurinkatu features a plaque that commemorates its long-time, distinguished inhabitant. A section of the park behind the building was recently renamed the Georg Henrik von Wright Terrace.

The author Risto Vilkko is docent of theoretical philosophy at the University of Helsinki. He worked as Georg Henrik von Wright’s assistant from 1995 to 2003.