Did the Hakkapeliitta pillage the Strahov Monastery Library in Prague in 1648?

The website of the Embassy of the Czech Republic in Helsinki offers a brief review of the history of Czech-Finnish relations. In this review, the Czech remind us that Finns participated in the plundering of Prague in July 1648, only about a month before the Peace of Westphalia and the end of the Thirty Years’ War.

According to the website, the Hakkapeliitta, who were Finnish cavalrymen serving in the Swedish army and known for their skill and valour, excelled especially in the evacuation of the Strahov Monastery Library (Královská kanonie premonstrátů na Strahově):“Strahov library was taken to Turku where Josef Dobrovský saw it in 1792 when travelling to Sweden and Russia at that time; the library burned in 1827 during the city fire”. How very embarrassing! Usually the deeds of our ancestors, both good and bad, in the Baltics, Poland and Germany in the 16th and 17th centuries have been attributable to the Swedes.

The looting of Prague was the last significant operation of the Thirty Years’ War. Early in the morning of 16 July 1648, a unit of about 3,000 men led by General Hans Christoph von Königsmarck raided what is known as the Lesser Town of Prague (Malá Strana) and the Castle District (Hradčany). The attack was repulsed or stopped on the Charles Bridge, and thus the Old Town (Staré Mesto) was saved. According to Königsmarck, the Old Town was never meant to be seized. To commemorate the defence of Staré Mesto, an inscription was installed later in the 17th century on the Charles Bridge:
SISTE VIATOR, SED LUBENS, AC VOLENS UBI SISTERE DEBUIT, SED COACTUS GOTHORUM, AC VANDALORUM FUROR
(Rest here, walker, and be happy: you can stop here willing, but here unwilling was stopped the fury of the Goths and the Vandals) 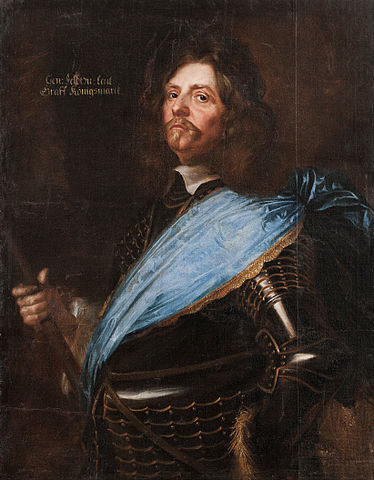 As for Königsmarck (left: Hans Christoph von Königsmarck, portrait by Matthäus Merian the Younger from 1651) and his men, they concentrated on plundering Malá Strana according to well-laid plans and instructions from Queen Christina herself. There was plenty to choose from: the Prague Castle, numerous palaces of the nobility and monasteries. The late emperor Rudolf II (died 1612) had amassed a significant collection of art works, some of which can today be admired in Stockholm. From the point of view of the history of the book, the most important loot included the Codex Argenteus, i.e., the Silver Bible, a 6th-century manuscript in the Gothic language, and the  Codex Gigas, the largest (49×89 cm) known Latin manuscript. The latter is also referred to as the Devil’s Bible because of the illustration it contains of the devil, in red and as tall as the folio. Both codices are preserved in the National Library of Sweden.

Sami Koski, Mika Rissanen and Juha Tahvanainen have in their work Hävityksen historiaa. Eurooppalaisen vandalismin vuosisadat (2007) dedicated a whole chapter to the pillaging of Prague by the Hakkapeliitta. A well-known Swedish historian Peter Englund in his work entitled Ofredsår (1993) emphasises the fact that the Strahov Monastery was plundered by a Finnish regiment. In all likelihood, Englund’s unnamed literary source is Otto Walde’s informed study of booty collected during Sweden’s era as a great power (Storhetstidens litteräre krigsbyte: en kulturhistorisk-bibliografisk studie 1) from 1916, in which Walde writes on page 324: ”Strahowklostred, där en finskt regement under överste Knorring huserade” (A Finnish regiment under Colonel Knorring bustled around the Strahov Monastery).

So, pillaging is a historical fact, but how about the allegation that the Hakkapeliitta were involved and took the Strahov Library with them? The term hakkapeliitta is, and apparently was during the Thirty Years’ War, a generic term for light cavalrymen from Finland. Königsmarck only had 1,000 German cavalrymen, a few hundred artillerymen for blowing open the gates and an infantry of 1,500 men. The colonel mentioned by Otto Walde is based on a contemporary source, i.e., the account of the events given by the abbot of Strahov Monastery.

The colonel referred to was Göran Johan Knorring (died 1649). His unit was the infantry regiment of Länsi-Uusimaa (western Uusimaa province), which included men mainly from Raasepori county in the western part of Uusimaa province, but also from Hattula county further north in the Päijät-Häme region. So far, all we know is that Knorring’s soldiers were more interested in the Monastery coffer than its literary and cultural heritage. Later, Knorring sold the precious objects taken from the church and the silver casket that protected the relict of St Norbert to the Jews. Incidentally, Knorring perished from the wounds he sustained in Prague. According to one source, he was hit in the head by a stone. As his regiment at that time consisted of 1,490 men, it begins to look like half of the soldiers who looted Prague came from western Uusimaa and Hattula. 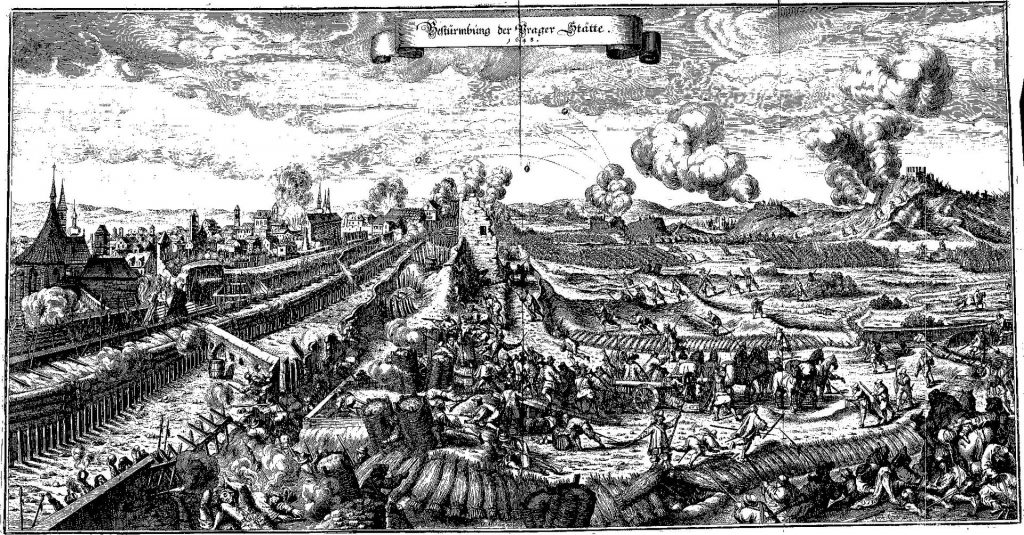 It is evident that the growth of the library collections of the Academy of Turku can be accredited to booty, but thus far, no sources can be found to verify that the Strahov Library was transferred to Turku. An eyewitness account does say, however, that the Swedish field chaplains circulated in the library and took with them books of interest to them.

Josef Dobrovský (1753–1829), who is claimed by the Embassy’s review to have studied in Turku the books stolen from Strahov, was a historian and a philologist, the founder of Slavonic philology. Dobrovský made an expedition, sponsored by the Bohemian Academy of Science, to Russia through Sweden. In Sweden he studied the loot from Prague, the Codex Gigas and the Silver Bible of the Goths, and reported this in his travelogue entitled

From Stockholm he travelled to Turku, where he met H. G. Porthan and visited the Academy Library. A closer look at Dobrovský’s travelogue does not, however, support the Embassy’s claim. Dobrovský makes a reference to Porthan’s work on the history of the Academy Library (Dissertatio historiam Bibliothecae Regiae Academiae Aboënsis exponens 1–25. 1772–1787), which states (on p. 29) that many books bear the coat of arms of Peter Vok von Rosenberg and the inscription of Franz Seraph von Dietrichstein, the Archbishop and Cardinal of Olmütz, and of the Olmütz Jesuit University and the Academy of Nobility.  Porthan does not mention any bookplates that would refer to the Strahov Monastery. The von Rosenberg library had been transferred to the Prague Castle for safekeeping a year before the siege. It was taken to Stockholm, where Queen Christina’s librarian Isaak Vossius sorted the loot. Duplicates were distributed to libraries around the realm and the Academy of Turku in all likelihood received some of them. It is more probable that the books stolen from Olmütz came to Turku through Vossius than as donations from the Hakkapeliitta soldiers.

It is indeed likely that the regiment from western Uusimaa did “bustle around” the Strahov Monastery, but the allegation that it would have taken the monastery library to Turku cannot be verified. It can also be assumed that Porthan would have mentioned Strahov had any material from there arrived at the Academy of Turku. The present Aboica collection contains no material from the above-mentioned libraries.

In any case, the new coat of arms granted by Emperor Ferdinand III to the city of Prague in 1649 bore the text Praga Vetus Finnis Svecis Gothisque fugatis. Symbolon hoc fidei, Caesare dante capit. MDC.XLIX. The fact that Finns are mentioned first, before the Swedes, is undoubtedly somewhat embarrassing.

The author, head of collections at the National Library, would like to thank Jussi-Pekka Hakkarainen for his valuable help in creating this article.