For a few sunny June days, Helsinki was the buzzing centre of debate about the future of research, science and librarianship at the Association of European Research Libraries (Liber) 2016 conference.

And the hottest topic in town? Open access. The conference was packed to full capacity because of the interest in this year’s theme, libraries opening paths to knowledge. The 500-strong crowd – an eclectic mix of librarians, academics and researchers from fields as varied as information technology, humanities and social sciences – weren’t left disappointed. In every conference room from keynote sessions to workshops there was excited urgency in the air. A sense that open access is the future and that future has already arrived. And that libraries are at the centre of it all.

So what can libraries do to lead the way in opening access to data, science and research?

In his opening remarks to the conference, Professor Thomas Wilhelmsson, chancellor of the University of Helsinki, argued that libraries are already key players in adapting to the fast-changing environment of research. Wilhelmsson described how hard it is to predict what the research landscape will look like even in 10 years’ time, but said that universities are well equipped to take on the task. They’ve always had to work on creating new knowledge and research libraries are vital in the transition to open science, he said. 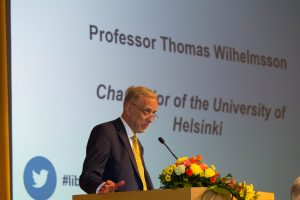 “Knowledge is more powerful than governments, religions. Knowledge will survive”, Professor Kai Ekholm, chief librarian of the National Library of Finland, told the delegates during the opening ceremony. He said that right now the world is being totally transformed by open science. Creating and sharing ideas truly is the future, he said. 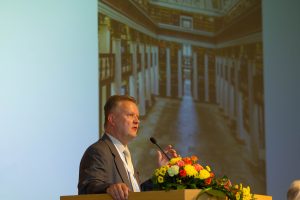 In her opening speech Kristiina Hormia-Poutanen, President of Liber and the National Library of Finland’s network services director, hailed the open science policy platform established by the European Commission earlier this year. She said there is now a strong momentum on a European level for libraries to play a part, and the platform will help remove many barriers to progress.

A revolution of ideas

“There is a revolution happening in the way science works”, stated the opening keynote speaker Professor Riitta Maijala, executive director of the Academy of Finland. Indeed, today scientists can open up their methods and data before they have published their research, something that was unheard of in the past. To crystallise the beauty of open science, she quoted chemist Linus Pauling’s words that “to have one good idea is to have lots of ideas”.

So much is now being done for open access: calls to action, projects and initiatives, Maijala said. But, she warned, unless people are motivated and inspired to work together, openness won’t become a part of daily practices and inherent to local, national and international infrastructures. In order to inspire people, incentives and benchmarking with peers is crucial, she said. In essence, one good idea is worth all the hard work.

“People need to jump off a burning platform to make change happen”, stated the plenary speaker Barbara J. Ryan, the Secretariat Director of the intergovernmental Group on Earth Observations (GEO). Her address to the conference drove home the reality of why open access to data really does matter.

It all began in late 2008 when Landsat images in the US were made freely available to the public, an effort that Ryan herself led. This, Ryan says, unleashed the power of earth observations. The policy-change has resulted in millions of Landsat scenes being downloaded to date and far greater co-ordination of satellites images and earth observation data than ever before.

According to Ryan the benefits to society are huge. The open data helps scientists, planners and policy makers better understand and make decisions about, for instance, disaster resilience and biodiversity. She showed extraordinary images created with shared earth observation data, for instance by mapping global seawater temperatures from the 1970s through to year 2000. Comparing GEO to other “brokering organisations” such as Uber and Airbnb, she said that the amazing value of data lies with its users: “Until someone comes and starts using it, it’s just a bunch of stuff.”

What Ryan showed is that the value of data is incalculable.  But driving the change to open access is a challenge – as she put it,“Global citizens deserve more”.

Let’s hope Liber inspired its participants to be a force for change.

Discover more! Most of the Liber speakers’ presentations can be found by clicking through the full programme at http://liber2016.org/programme/full-programme/