Evening at the Crypt of the Uspenski Cathedral (Saturday 9 Jan) 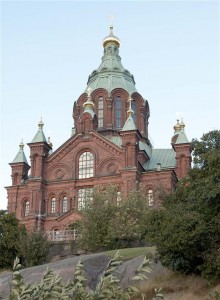 There is no need to register to this Saturday excursion, and the event is free of charge.

19:35 Guided tour in the Uspenski Cathedral (Kanavakatu 1) and addresses by representatives of several faiths in the Cathdral Crypt.

15:00–17:00 Excursion to religious buildings and/or museums in groups in the Helsinki city centre.

Registration to the guided tours is not necessary, but please drop an email to teemu.pikkumaki “at” helsinki.fi if you definitely want to be in a certain group. The following groups are availabe by now:

Possible entrance fees to museums or possible public transportation tickets are not incl. in the conference registration fee, to be paid on site.

Registration to this dinner needed by 18 December to the conference secretary (teemu.pikkumaki “at” helsinki.fi), binding because of the dinner order, buffet dinner 35 € (not incl. in the conference registration fee, to be paid on site).

Hotel President is just 300-400 meters from where the Finnair buses (Elielinaukio) and trains (Helsinki main railway station) depart to the airport.