It was supposed to rain heavily on July 19th so I went to hives a bit earlier than others.    Hives from 1 to 4 are under a support frame that gives shelter from the rain, but other three have no such thing and since I’m not keen on opening the hive when it’s windy and pouring rain I was prepared on taking a lot of breaks in the laboratory and just waiting.

I like taking care of bees on my own- it somehow feels a bit different and I find myself in a nice zen state of mind.  But I love working with others, since ergonomics and lifting hive boxes filled with bees and honey really don’t meet; they rather pass each other from distance, not really being certain the other actually exists.  So my relief was evident when I found out that there really wasn’t much need for lifting this time.  How do other beekeepers do this all the time?  I do exercise and I’m not unfamiliar with physical work either (quite the opposite- I like it) but lifting heavy boxes with awkward size and shape rings all the alarm bells in my mind. 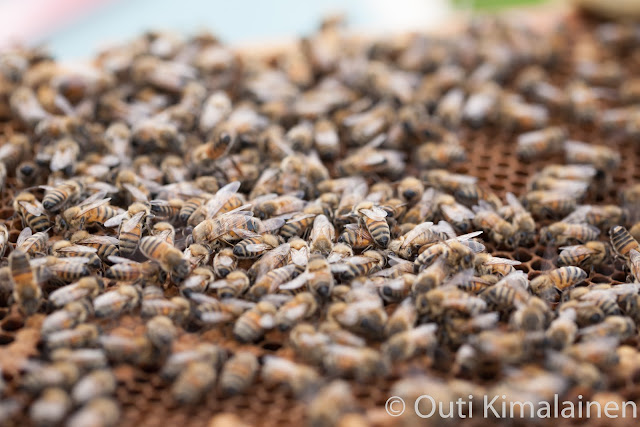 An active and eager population.  Underneath the bees you can see sealed pupae cells.

Hive 7 has two boxes and for reasons unknown to me, they fancy doing everything on the top one.  It was filled with frames heavy on honey and larvae, when the bottom box was light and quite randomly stacked with honey.  Bees were active, and quite interested on my presence.  Lots of smoke was used to get them from squishing to death while moving frames and boxes.  Last week’s selection of queen cells was vanished almost completely, with only a few empty ones remaining.  No sighting of the queen nor eggs, but since it had been a really cold and windy week, she probably hadn’t even flown yet.  Pollen stock was quite tiny, as it has been with other hives as well.

Hive 5 with it’s two boxes was quite calm- could it have been the weather that made the bees so easy to handle?  Upper box had a nice amount of honey, and as I found eggs right when the heavens opened and it began pouring, I stopped searching for queen and left the hive be. 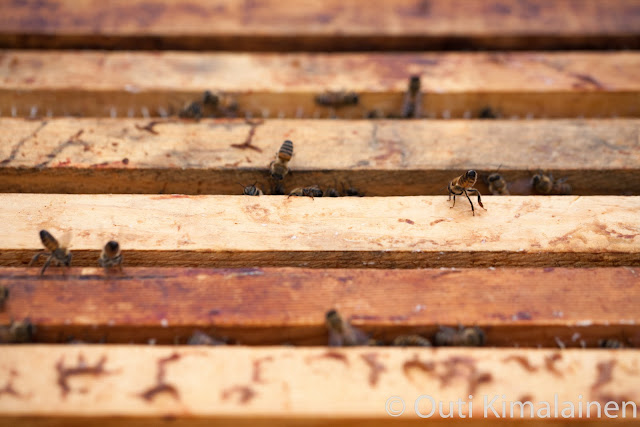 Hive 6, passive and sadder than ever. No-one has energy to do anything.  Some slight activation of Nasonov glands happens, that’s all.

Hive 6 was a miserable disaster.  The bees couldn’t have cared less if you’d just began eating them right then and there.  They were moving on slow motion and didn’t come out much.  And it got worse- all the larvae moved earlier to this hive from others, were dead and dried to their cells.  There were almost fully-grown pupae on the bottom of the hive and no honey to be seen- the nest was dry and dying.  In their desperation they had opened the sealed cells and eaten the royal jelly and nectar meant for larvae, and could have even emptied the fluids form the growing youngsters.  This sort of behavior is the last resort which usually takes place only on late winter, when there are no food left and no new nectar and pollen to gather.

So what had gone wrong? Was the transport too much for the bees? Was the hive too weak to begin with in some way?

As first aid I placed a full frame of honey to the hive, from hive 3 since the last I knew, it had been doing really well.  This is the part when I also realized that we really needed to have common notes available to all of us- if someone isn’t present when needed and no notes of persons hive are available, you have no idea what the history of hive has been and is it ok to do changes like this.

The starving bees of hive 6 practically wolfed eagerly to nectar-dripping frame and I let them to feast.  A frame with larvae was also placed there, and the next morning when I paid them a visit they were much livelier than before.  Let’s see what the next visit brings.