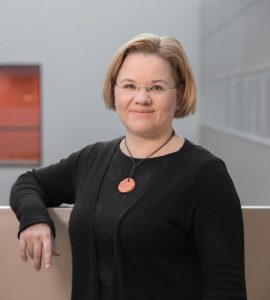 Our first online Physics Colloquium for this autumn season will take place on Friday, September 17th. Our speaker will be Minna Palmroth, who will talk to us about the recent discovery of a new auroral form, enabled by citizen scientists.

Minna is Professor in Computational Space Physics at University of Helsinki and the Director of the Finnish Centre of Excellence in Research of Sustainable Space. Her research work combines magnetospheric physics and high-performance computing, as she is leading the development of one of the largest supercomputer space physics models.  In 2018, she published a popular science book about the aurora, Revontulibongari opas, which features pictures from aurora hunters all across Finland. This book was the first step to an unexpected scientific collaboration.

In her colloquium, titled Citizen scientists discover a new auroral form: Dunes provide insight into the upper atmosphere, Minna will talk about the journey leading to this discovery and the scientific implications of the citizen scientists’ findings.

Auroral forms are like fingerprints linking optical features to physical phenomena in the near-Earth space. While discovering new forms is rare, recently scientists reported of citizens’ observations of STEVE, a pinkish optical manifestation of subauroral ionospheric drifts that were not thought to be visible to the naked eye. This talk tells an exciting story of a citizen science project that led to the discovery of a new auroral phenomenon. Dunes are a horizontal stripes in the green aurora, and are currently thought to originate from the oscillation of the underlying atmospheric density. On Oct 7, 2018, citizen observers took multiple digital photographs of the same dunes simultaneously from different locations in Finland and Sweden. We develop a triangulation method to analyse the photographs, and conclude that the dunes are a monochromatic wave field with a wavelength of about 45 km within a thin layer at 100 km altitude. Supporting data suggest that the dunes manifest atmospheric waves, possibly mesospheric bores, which are rarely detected, and have not previously been observed via diffuse aurora, nor at auroral latitudes and altitudes. The dunes present a new opportunity to investigate the coupling of the lower/middle atmosphere to the thermosphere and ionosphere. We conclude that the the dunes may provide new insights into the structure of the mesopause as a response to driving by ionospheric energy deposition via Joule heating and electron precipitation. Further, our paper adds to the growing body of work that illustrates the value of citizen scientist images in carrying out quantitative analysis of optical phenomena, especially at small scales at subauroral latitudes. The dune project presents means to create general interest towards physics, emphasising that citizens can take part in scientific work by helping to uncover new phenomena.