We’ve recently had a paper published outlining the results of two different studies that looked at the roles of domesticated animal companions in the lives of transgender and non-binary (TNB) people. In one of these studies we analysed survey responses from 23 people who were asked about the overlaps between human and animal directed violence. In the other we used data from interviews with eight TNB people who were asked a variety of questions about their relationships with their animal companions. This paper is the latest in a series of work we have done looking at TNB people and their animal companions, with a focus on how these strong, loving, relationships might help both the humans and the animals, especially if they are recovering from domestic and family violence.

In our research we found that almost a third of our participants had experiences where an animal was threatened as part of human-to human conflict/violence.  This was not only related to intimate partners, with participants discussing violence by other family members toward their animals. One person, for example, talked about how their father “used to take his anger out on the family dog”. This kind of violence had long lasting effects for some of our participants, who talked about how it still features in their flashbacks. People also told us how the abuse of their animals helped them see that they were living in an abusive situation and so their animals became a catalyst pushing them to leave their abusers. This was not always straightforward, though, with some of our participants explaining that they stayed in the abusive situation in order to protect their animals.

What was exceptionally clear from our participants was that their animals were very important to them. They told us that their animals offered stress-relief, comfort, and strength. One person told us “the love I received from my dogs helped me to endure the abuse more than I would have been able to do otherwise”. Participants also told us how their animals brought joy to their lives and offered them non-judgmental support. This was important in both recovery from abuse and in terms of their animals accepting them for who they were. As one person told us, “‘I can never be certain that [interacting with other people comes] without judgement, whereas I can with the dog.’

Our participants were also open with us about how their own behavior negatively affected their animal companions, acknowledging that witnessing human-to-human conflict often upset their animals. Some also told us how they took their own trauma out on their animals. While we acknowledge that for many people leaving abusive situations, remaining with their animals is important (for both species), we also see that sometimes the animals can be further harmed and that in some situations their humans are not able to care for them. While it is difficult to discuss this, we feel that this is an area that needs a lot more research.

Overall, the picture that is emerging from the series of research we have conducted is that TNB people encounter many issues that are similar to cisgender people in terms of domestic violence and the effects it has on their animals. But, they also have specific gender-related abuses in addition to this. Relationships with their animals offer a buffer to this kind of treatment, offering joy, relief, non-judgmental companionship and sometimes the ability to see that they are caught in abusive situations as well as to reflect on aspects of their own behavior toward animals that may not be ideal. 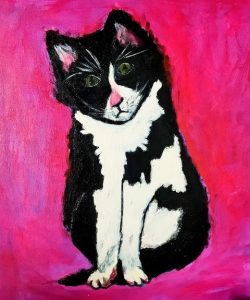