Last week I wrote a text “Can advocacy groups replace independent university researchers?” capturing my views about advocacy groups (i.e., Pyöräliitto) entering the research domain in my field. Pyöräliitto’s Executive Director, Matti Koistinen, wrote his response yesterday. Apparently, he wanted to correct mistakes in my blog. As I will show now, he has not corrected any mistake because there were none to be corrected. Matti actually confirmed all of my writings. His explanations and justifications of Pyöräliitto’s research attempts, however, deserve my answer. I thank Matti for his response as it is important to discuss the role of advocacy groups in conducting research and disseminating scientific knowledge.

OK. Let’s see what ‘mistakes’ should be corrected.

I am glad we both agree that more traffic psychology research is needed.

I wrote in my text “They often engage in debates, especially in social media, with traffic safety workers employed by state-sponsored organizations such as Liikenneturva, whose main role is not to conduct research but rather to operate within strict rules set by various laws.”

It is difficult for me to understand why Matti wrote a separate section about Liikenneturva. I mentioned Liikenneturva in the above sentence as an example of state-sponsored organizations, which Liikenneturva is as Matti acknowledges. Everything else Matti wrote in these two paragraphs is unrelated to my text. Btw, “…Liikenneturvan uhreja…” looks like a Freudian slip.

As I understand, Matti says it was difficult to make selection because they received more than 40 submissions. As I wrote on Twitter, perhaps, it is now good time for him to publicly answer my question I asked several times. Did you or did you not ask new presenters after the deadline for submissions had expired?

Btw, we researchers are used to rejections. All researchers, even the best ones (whatever that means), have papers rejected. The rejection of my submission to Velo Finland represents only one of the several examples in my text describing the way Pyöräliitto entered the research domain.

My intention was not to mock other researchers. My writings (on twitter) are specific (we all know to whom I referred) and I was very clear in my blog:

“This doesn’t mean some excellent researchers will not present their high quality research, it means each submission will not be judged by its quality by qualified researchers, they will be judged based on whether a few people sitting in Pyöräliitto’s board like them nor not. Pyöräliitto will filter what they like and this will be presented to their audience and the Finnish media.”

I understand the difference between a professional and scientific meeting. However, I would like to know how many organizers of professional meetings advertise their seminar as “the place to be if you want to learn about new research” and invite researchers “to present their best research” (!) while not having an independent scientific committee. Submit your best research, but please be aware we will not select presentations based on their quality, we will select them based on… what? This is disrespectful to researchers and their work. 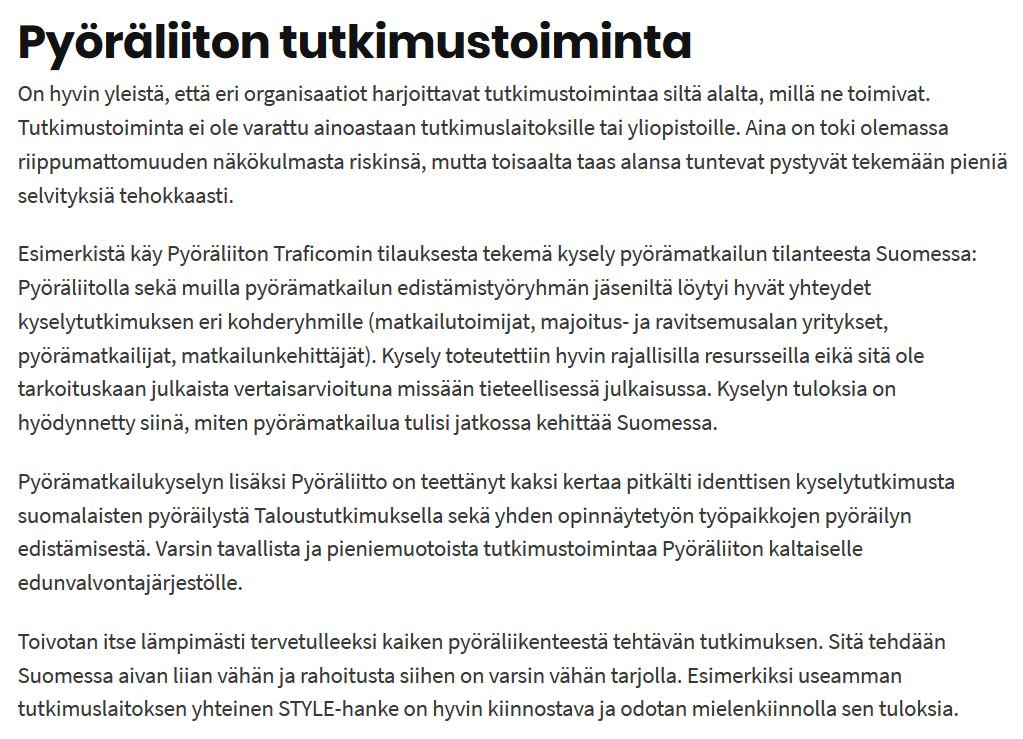 Matti says that although the state decides about the funding model for Liikenneturva, the money is actually collected from motor vehicle owners. Because the state has decided that Liikenneturva’s funding comes from motor vehicle insurance, it is possible, according to Matti, that Liikenneturva is not neutral in their work (”Raduin väittää, että Liikenneturva on valtion rahoittama ja antaa ymmärtää sen olevan neutraali toimija.”)? Similarly, Pyöräliiton puhenjohtaja repeatedly and publicly insinuate that car industry funds my Australian colleagues who then produce bicycle helmet research in support of denialism.

On the other hand, Matti doesn’t see any problem if an advocacy group conducts research, which results will directly (!) support their goals. It must be that advocacy groups are very neutral when it comes to research they carry out, while others are not neutral in their work and/or are funded by the car industry to produce research in support of denialism. It smells of double standards to me, to say the least.

Furthermore, it is irrelevant you have no ambition to publish your results in scientific journals. It is important, as you say yourself, that your results will be used for the development of cycling tourism (and cycling infrastructure) in Finland. Pyöräliitto uses their results to influence policy makers. Policy decisions must be based on evidence. Not based on kind of ‘research.’

Hillman’s publications were from 1992-1994. That’s plenty of time for you (and others) to carefully and critically read them. Unfortunately, you are not an exception. It is unbelievable how often this ratio has been used and abused. Here is my list that is constantly updated. On the other hand, it seems important to hear researchers even before they publish their results in scientific journals. For example, one option could be to allow university researchers to present their preliminary findings at professional meetings organized by advocacy groups.

I have no doubt that your employees and members are highly educated. However, as I clearly explained in my blog, you have not put your hypothesis (i.e., a claim) to the test. Researchers test their hypotheses. That’s what researchers do. That’s how research is done.

And no, it is not absurd to have independent evaluators if you call researchers to submit their best research. And it doesn’t cost anything because researchers are not routinely paid for their participation in a conference committee, but it seems you are unfortunately unaware of that. To repeat again: it is misleading and disrespectful to invite researchers to submit their best research if you don’t have independent and qualified evaluators who care about the research quality instead of the advocacy group’s goals.

You have every right to say whatever you think that might be in the interest of your members and organization, cycling in general, and traffic safety. I really don’t care whether Pyöräliitto will issue a statement about nuclear plants, euthanasia or whatever. I care, however, whether policy makers will accept your statements as a source of a balanced, critical and comprehensive overall review of scientific literature. I was very clear in my blog:

“We should understand and accept that advocacy groups are advocacy groups and not a source of a balanced, critical and comprehensive overall review of scientific literature. The lack of independent traffic psychology researchers at Finnish universities makes it easier for advocacy groups and ‘experts’ to enter the research domain and establish themselves as a credible research source in public policy discussions.”

I also care whether the state and state-funded organizations give you funding for your ‘research’ and support the way you disseminate scientific knowledge.

In conclusion, I have no idea what incorrect things in my original text you supposedly corrected. I might not be the most politically correct or polite person, but I understand the difference between advocacy and research. I hope politicians and public policy makers also understand it.

Note: this time I had no time or interest to edit the text, but I hope my English is understandable enough.