RISCAPE is a H2020 project aiming to provide a consistent report of the international research infrastructure landscape, particularly to help European Commission, other funding institutions and the ESFRI in their work supporting development of the tools for the science.

The landscape analysis in this context refers to process where the European RIs are evaluated on their complementarity to key international (i.e. outside of Europe) RIs and initiatives. This process consists of specific steps and is aimed towards producing report which is a fair and representative of the global landscape. The project will include the following phases:

The European MERIL project maintains a database of European RIs, and currently[1] they report a total of 565 Research Infrastructures in the Member Countries. This number is far to large for international landscape analysis, and thus the RISCAPE report is concentrated on the pan-European disciplinary RIs. Specifically, key initiatives in RISCAPE are the RIs specifically mentioned in the ESFRI Landscape 2016 document, with priority attention paid to ESFRI landmark RIs and ESFRI Roadmap projects. Other RIs can be included if they are important on the European research landscape, if found as such by the RISCAPE Stakeholder panel.

Finding out which are the key international RIs to compare with requires both internal and external information collecting. A key strength of the RISCAPE project is the integration of some of the ESFRI cluster projects into the project; RISCAPE uses the discipline expertise of the partners and the engagement with the RI clusters and the other key European RIs to find out similar RIs in the international landscape. This engagement is operationalized by arranging disciplinary RI workshops and collecting information by questionnaires from the European RIs and possibly in some cases, their user communities. This process is supplemented by independent research on the RI capabilities outside of Europe. The main result will be a list of European RIs with corresponding international RIs and initiatives, with suggested information collection methods (see methods below, and WP2) and the complementarities (see below) expected to be relevant for this analysis. Again, the role of the Stakeholder panel is crucial, as they have an opportunity to identify key initiatives, suggest methodologies, or prioritize the work. 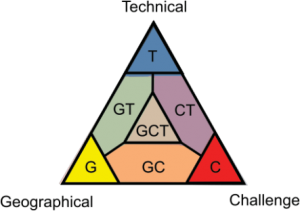 Technical (T) complementarity means that the European RI complements the technical capabilities of the international RI field – this can be e.g. differences in observation capabilities (detection energies, fieldwork capabilities, spatial or temporal resolution, species evaluated and so on). Purely Technical RI complementarity describes a situation where the European and the international RI only differ by technical capabilities, and the other aspects are either similar or insignificant. In the current ESFRI landscape document, the physics and engineering landscape was presented mostly from the Technical complementary point of view. Lack of technical complementarity refers to situation where the used technology is similar in scale that it does not significantly affect RI operations or that the technology used is not important for the RIs (relevant mostly for remote site access RIs, such as INTERACT).

Geographical (G) complementarity means that the European RI complements international RIs and initiatives by providing services or data about a specific geographical area, often Europe. This is a typical case for generally global initiatives, where the European RI is the regional node – these RIs are typical in the environmental sector (see box for ICOS – NEON complementarity for an example). Lack of geographical complementarity can mean for example a global RI, overlapping areas or a discipline where geographical location is not important for the RI operations (e.g. many single-site RIs). Gaps in global coverage might be identified with a view to pinpointing areas where Europe might show leadership and develop the field in future.

Challenge (C) complementarity presents a difference in the overall scientific aims of the RI, which can reflect the operational goals and products developed in the RI, even if the other factors would be similar. Lack of challenge complementarity is evident on Research Infrastructures based on answering very similar scientific and social challenges (e.g. RIs answering to the Emissions of greenhouse gasses or RIs mapping the marine biodiversity) or RIs where a specific scientific challenge is not a major part of the RI operations (e.g. many physics RIs or general resources like).  High level of complementarity in Challenges can represent a situation where otherwise similar RIs answer different social or technical questions – also showing high potential of e.g. data sharing or widening the user base for other challenges

It is very important to notice that this step in particular is strongly discipline dependent. RISCAPE analyses are done by the experts of the field of study and the viewpoint of the analyses (including the information gathering method) are chosen to best suite the field in question. For example, many of the Physics RIs are strongly suited for Technical complementarity viewpoint, but the geographical or challenge complementarity can be less pronounced. At the same time areas where there might be greater interdisciplinary opportunities for addressing challenges in future will be identified.