Galina Miazhevich is a Lecturer in Media and Communication in the University of Leicester, UK. She was a visiting fellow at the Aleksanteri Institute in March–April 2017.

Could you tell a bit about your work relating to Russia and media? 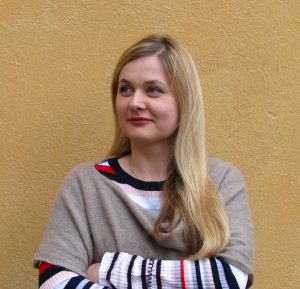 I’ve been working on post-Soviet media for a number of years and have done two post-docs on the matter: one on the representations of Islam as a security threat in the Russian, British and French contexts at the University of Manchester and another independent project as a Gorbachev Media Research Fellow at the University of Oxford. The latter project focused on the issues of censorship and press freedom in the post-Soviet space. We organized a series of Gorbachev Press Freedom lectures, with several prominent media personalities and practitioners as invited speakers, including the director general of the BBC. It was an interesting time to discuss these topics also in the UK, due to the debates on how media regulation should proceed in the country.

My research approach is qualitative as I’m coming from the field of media and cultural studies. I study indirect indicators of media management and freedom of speech, looking at what can and cannot be expressed in the official and unofficial media. This includes not only texts but also visual images, as when I explored political satire memes in Russia, Ukraine and Belarus. It’s important to understand the meanings generated at the grassroots level. For example, when reading online forums right after major events, the wealth of information one can get there is remarkable. For a number of years, I’ve been studying the Eurovision Song Contest, and discussions around it are not only about the music, but about the relationship between the East and the West, homosexuality, antisemitism, camp culture…

How do you see the state of freedom of speech in Russia currently?

It’s a very difficult question and becomes more sensitive with every new election cycle. One can see the tightening of regulations, as in the case of the internet recently. These changes need to be placed in the context of wider processes. A number of years ago someone said that the Russian media follows the Belorussian path. Belarus is known for quite stringent controls and it seems that Russia is following this model.

At the same time, there is another kind of development, as one can see in the diversification of the products offered to the public. You can see a variety of voices and different programmes being aired…it seems that there is a creation of a more diverse and less clear-cut scene, where there is a wide choice for the public. However, the choice is more related to entertainment. They are trying to go for this hybrid type of management, with entertainment and consumption, and less straightforward expression of ideologies or something directly related to politics.

At the same time, it seems that even TV series try to promote some messages or core values. There are many very well-made TV dramas that go back to different periods of the Soviet times, not maybe exactly romanticizing the era (even though they are semi-nostalgic), but utilizing it to create some kind of common space that the audiences can identify themselves with. There are also all these TV presenters from the Soviet era, which creates a kind of feeling of stability and continuity.

Talk show Projectorparishilton is an interesting example. The show was halted for five years and only recently re-vived. The hosts discuss, in a satirical way, topical news, which is not necessarily an easy issue for the establishment. The question is why this programme re-emerged right now? When you talk about Russian media you can’t just talk about strict regulation and ‘contained’ voices, but you need to look at dynamics and nuances, and place them in the wider context to understand why these programmes or trends are appearing. As some scholars argue, even in a very tightly controlled media environment there might be different voices (at times, accidentally) coming through. And then the question is, ‘why is that?’ Whether it was accidental, whether it is a sign of genuine disagreement or maybe it was done on purpose to demonstrate diversity or act as a safety valve. The situation with Russian media is not clear-cut and is therefore interesting for a media scholar. For example, internet management is much more complex and poses challenges, but at the same time provides a rich field for analysis and identifying trends.

Do you have any predictions concerning the future of media freedom and freedom of speech in Russia?

It’s very difficult to predict the future. Some of the trends we observe right now, such as diversification and hybridization, will persist. However, it’s difficult to say what the developments will be like concerning the attitudes to journalists, their ‘intimidation’ and corresponding self-censorship. It’s going to be interesting to compare the management of journalist practice within the country and abroad: I’ve also been studying Russia Today, which is a ‘product’ for the external audiences and has a different idea of the journalist practice. Another idea that comes to my mind is that because Russia is such a huge state with different regions, there might be some developments concerning the regional media. Some of these, including TV broadcasting and radio, aren’t so strictly regulated and they have the ability to produce good quality content. Whether the establishment will tolerate this is interesting because some of the regional media are more popular than the mainstream ones. So one can see these different levels of management concerning production for external, national and regional audiences.