The Russian Media Lab is well-represented at this year’s Aleksanteri Conference. The project is hosting two panels and one round table, featuring presentations by our researchers, network partners and invited guests. Further details on our panels can be found below. Please consult the Conference website for the latest version of the programme. We look forward to seeing you there!

Andrei Richter (Office of the OSCE Representative on Freedom of the Media): Post-Soviet Perspective on Evaluating Censorship and Freedom of the Media
Marina Galkina (Lomonosov Moscow State University, Russia): The Forecast of Changes in State Regulation of Russian Media from the Point of View of National Media Companies
Liudmila Sivetc (University of Turku, Finland): Indirect and Direct Control in Russian Internet Governance
Katja Lehtisaari (Aleksanteri Institute and Swedish School of Social Science, University of Helsinki, Finland): “Yarovaya Law” and Discussion on Information Safety

Roundtable: Russian MediaLab 3: What Does the Future Hold for the Internet in Russia? Between the Promise of Democratization and the Reality of State Surveillance

The Russian Media Lab has initiated a collaboration with the international art project “States of Control” curated by the St. Petersburg-based Creative Association of Curators (TOK). Upon invitation by TOK’s Anna Bitkina and Maria Veits, project researcher Saara Ratilainen took part in the performative talk show “I’ve Got the Power!” on 19 August 2017.

States of Control took over Finland in August with a series of exhibits and performances at the Alkovi and Augusta galleries in Helsinki. The events were organized in collaboration with the Helsinki International Artist Programme (HIAP) “Connecting points” curated and coordinated by Finnish artists Miina Hujala and Arttu Merimaa. One of the central aims of the project is to advance the role of art in understanding the most difficult political questions of our times: occupation, border control, immigration and propaganda. The topics discussed through art projects curated by TOK overlap with the central research interests of the Russian Media Lab, namely emerging spaces of freedom of expression in different areas of cultural production.

The idea for the project emerged from the realization that, as Bitkina and Veits put it,

“political turbulence and conflicts of the last few years have launched numerous propaganda campaigns and battles in the press. The war in Syria, the annexation of Crimea, emerging opposition between Russia, Europe and the US, Brexit, forced migration, increase of terrorism in Europe and other issues have been circulating in the media and often used as elements of massive political games and power relations.” 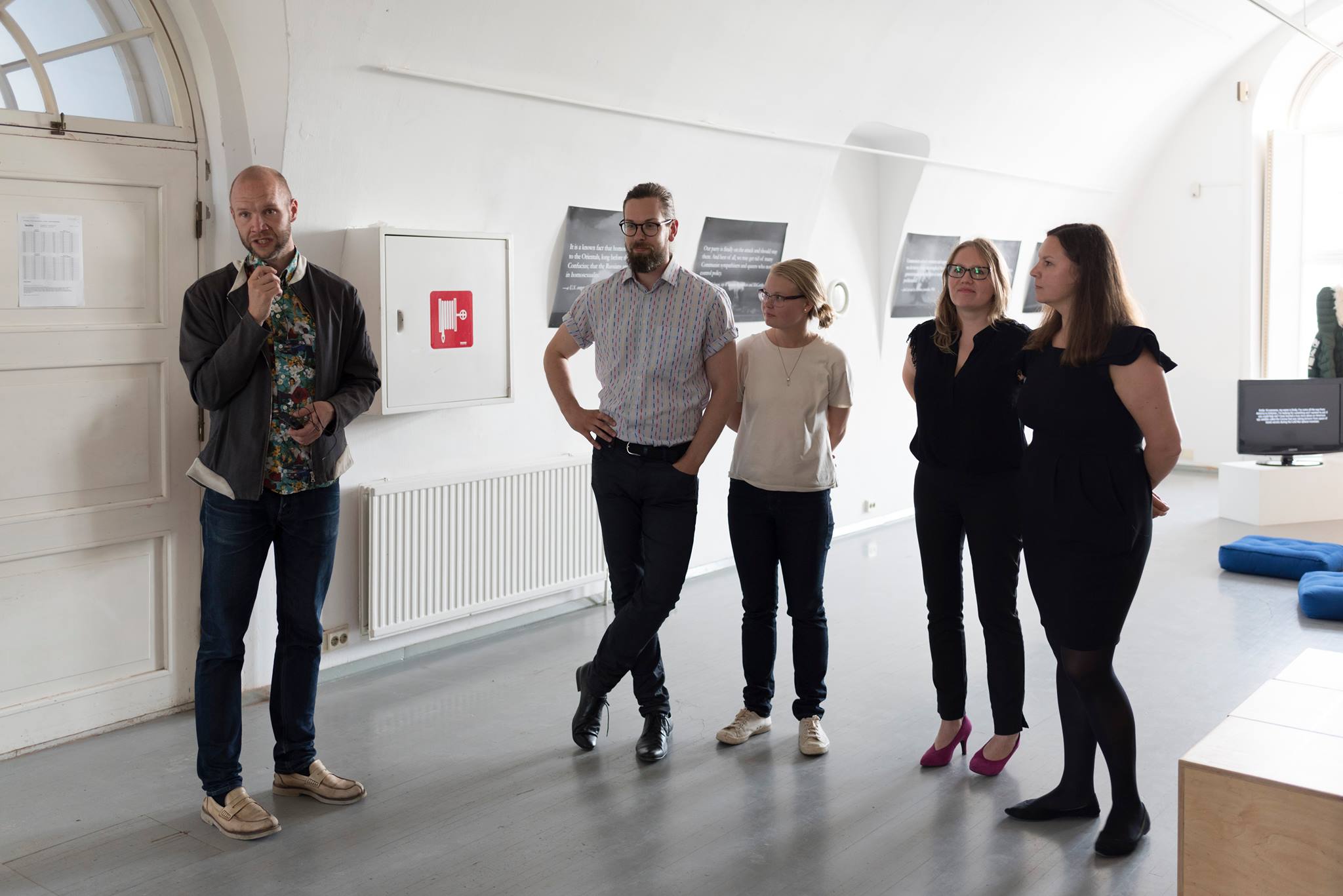 “Today, ‘alternative facts’, propaganda, fake news, and carefully designed media narratives have more control over our lives than ever. We have become utterly dependent on our electronic newsfeeds, which we allow to shape our worldviews and opinions.”

To tackle the role of contemporary media in producing polarized exchanges of opinions, political confrontations and propaganda, Bitkina and Veits organized the performative talk show “I’ve Got the Power!” The talk show’s host Denis Maksimov structured the discussion around the questions “What is truth? Who constitutes the rules of reality?” He explains the importance of these straightforward but thought-provoking questions as follows:

“The contemporary thickly media-saturated world is a neoliberal marketplace of subjective realities, where the diversity of ‘offering’ on the ‘shelves’ is dictated by the multiplication of the power centers. The history did not end, as Francis Fukuyama assumed it would, with the collapse of one superpower and ultimate, final rise of the singular winner. (…) The tool of defining reality hadn’t changed: propaganda covered the walls of Ashurbanipal palace thousands of years ago and now it covers private ‘walls’ of Facebook. Have we got the power to critically evaluate, deconstruct and reveal its hidden agendas, power narratives and enslaving desires?” 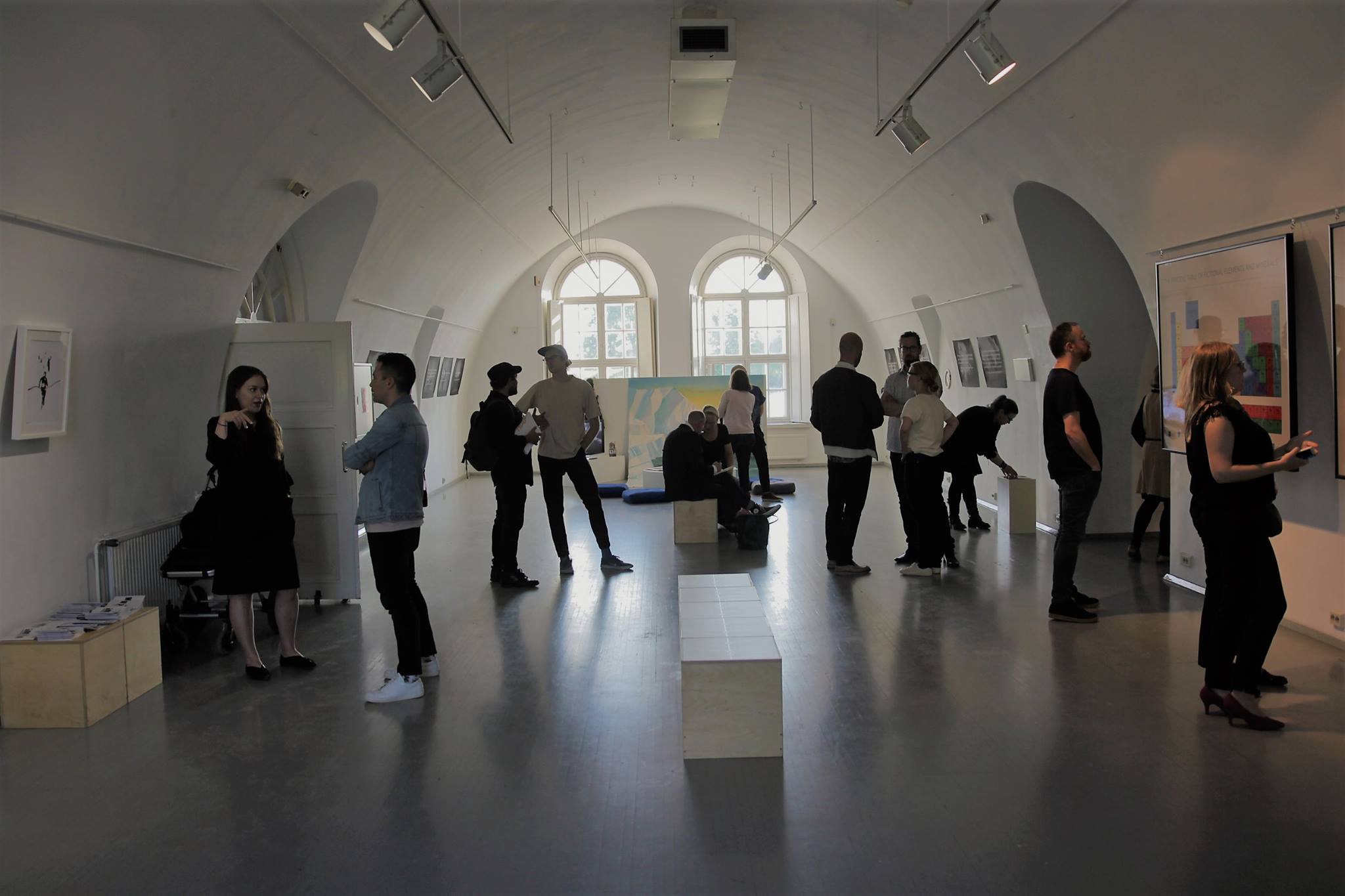 One of the exhibition spaces of the beautiful Augusta Gallery on Suomenlinna island. Photo: Shir Comay 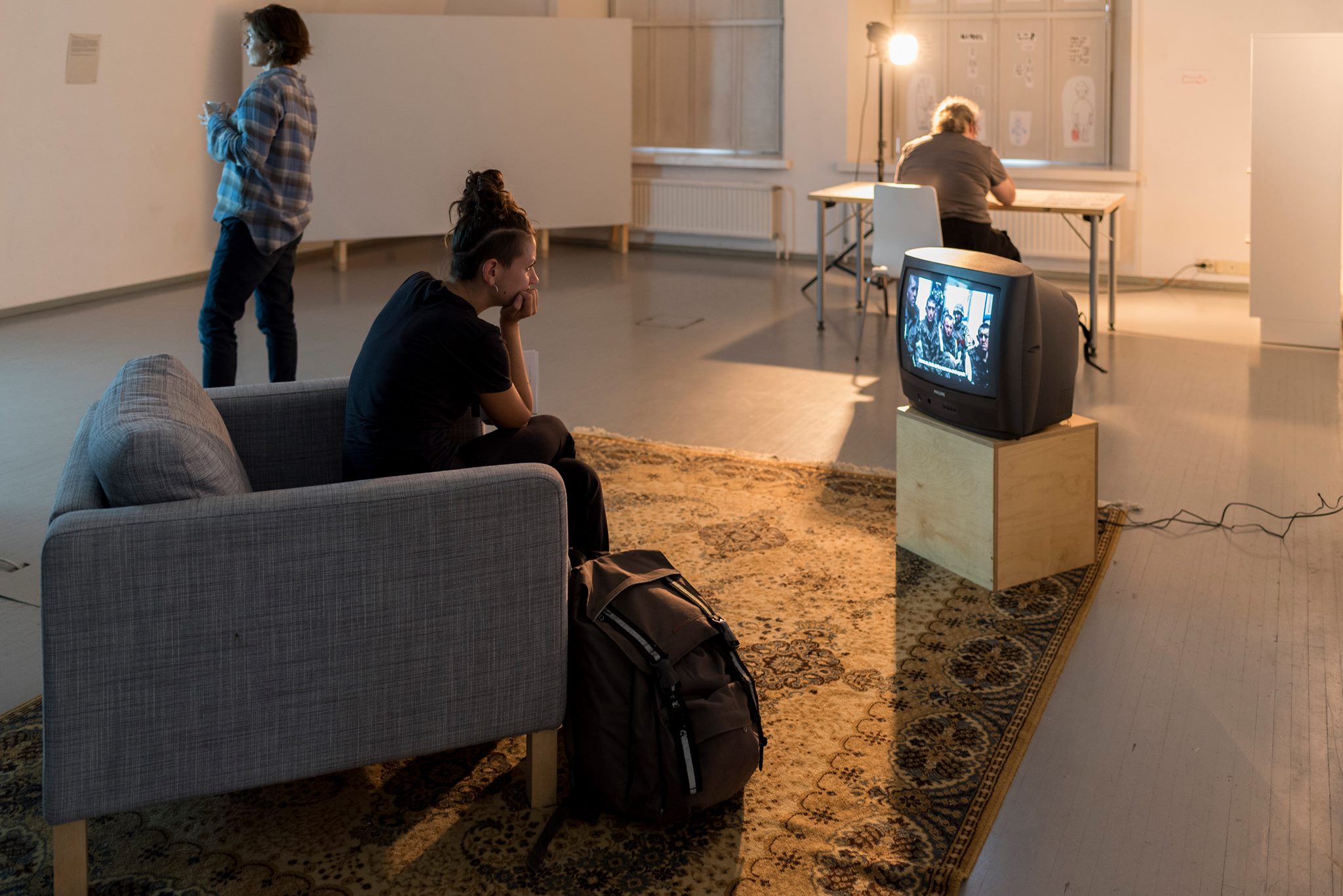 Display of Mikhail Tolmachev’s video installation ‘What Has Been Seen (Cannot Be Unseen)’ on the conflict in Ukraine at the ‘States of Control’ exhibition in the Augusta Gallery. Photo: Sergio Urbina 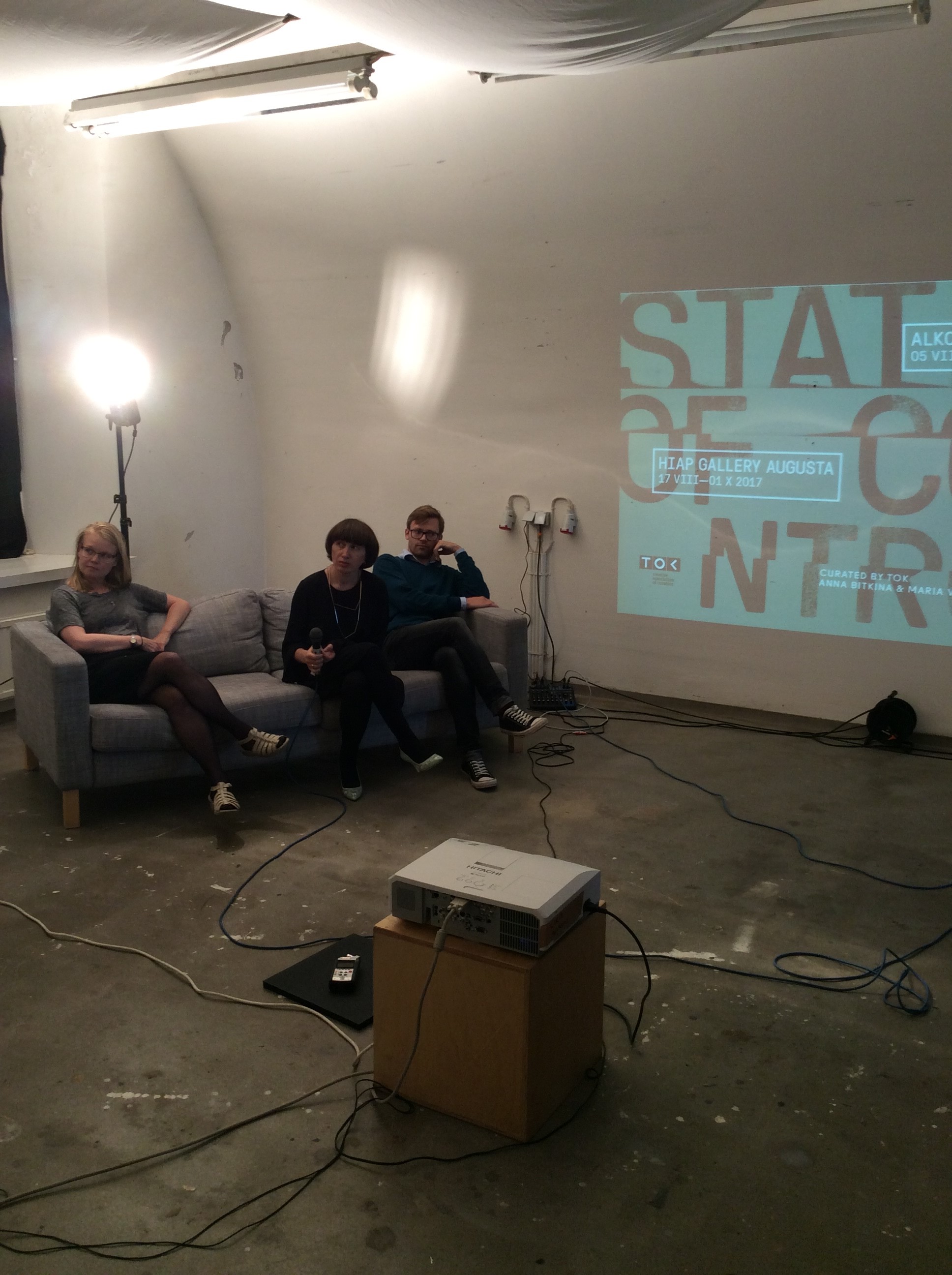 One of the discussion panels on the performative talkshow ‘I’ve Got the Power!’. From left to right: curator Miina Hujala, artist Alevtina Kakhidze, researcher Maksim Alyukov. Photo: Saara Ratilainen 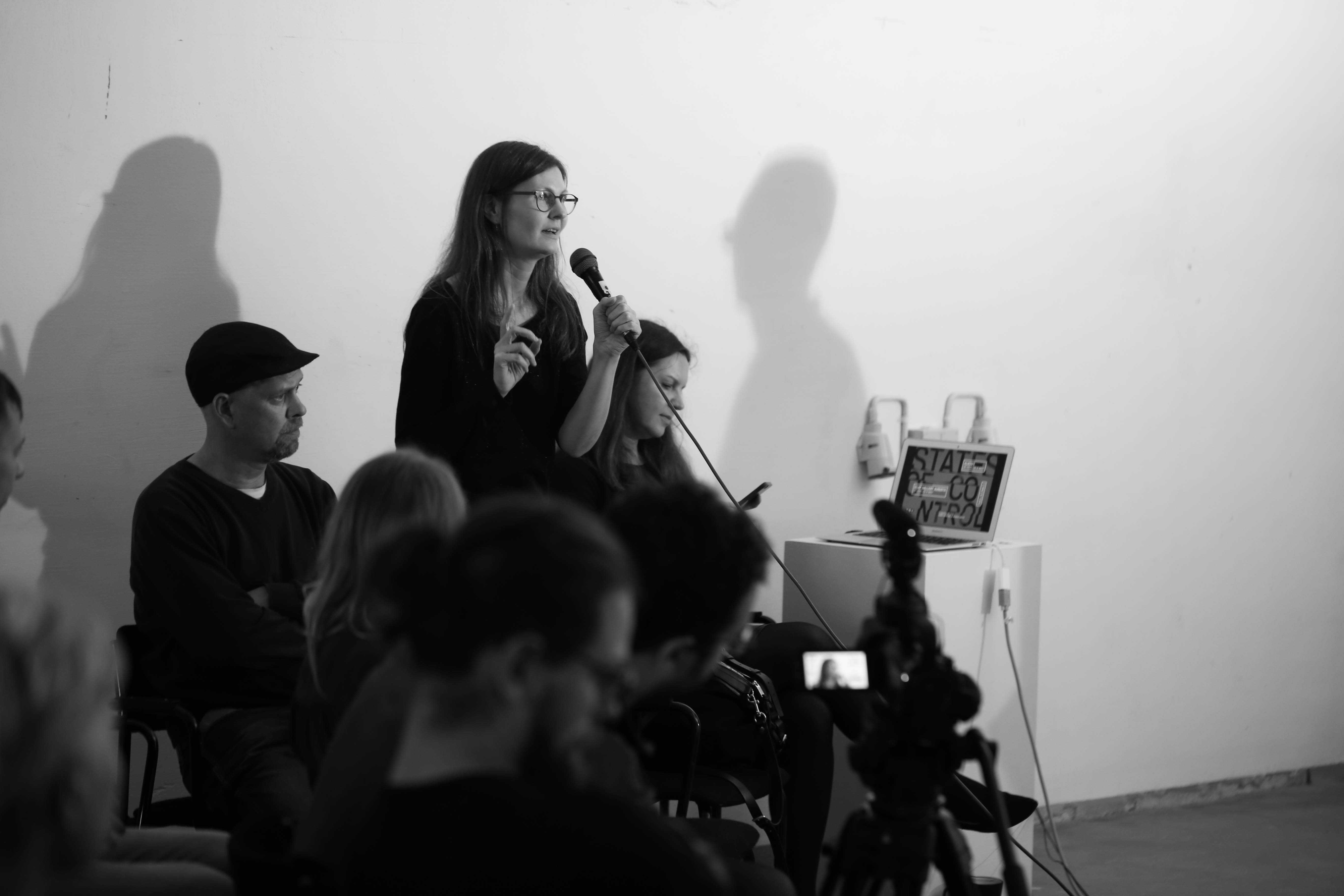 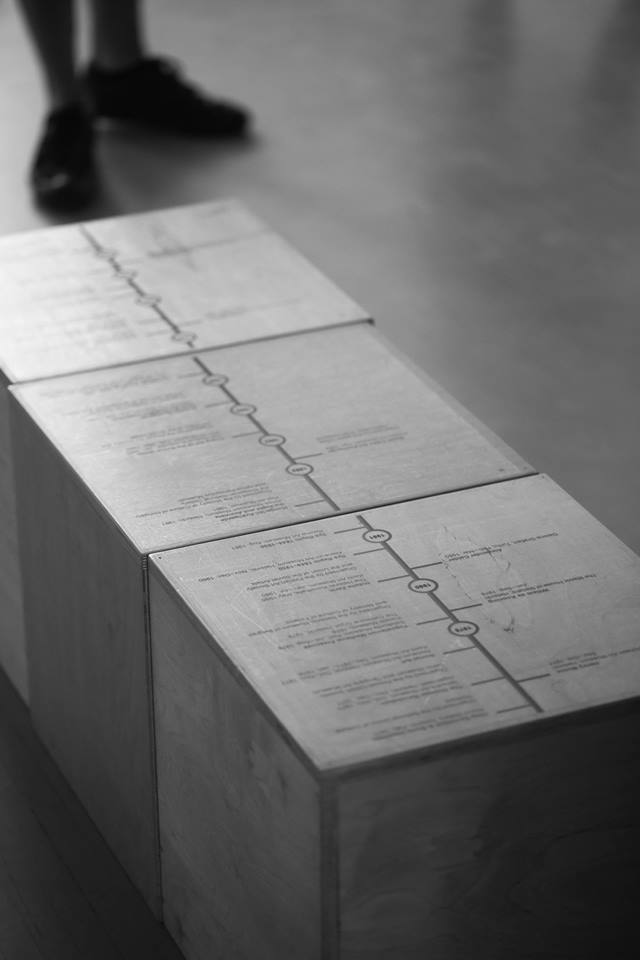 Artwork by Kalle Hamm and Dzamil Kamanger ‘East-West Exhibition Battle’ at the ‘States of Control’ exhibition in the Augusta Gallery. The artwork, commissioned by TOK for the exhibit, consists of 13 wooden boxes with a timeline describing artistic collaborations between East and West. Photo: Timo Tuominen

“States of Control” is a continuation of TOK’s ongoing research into changing media strategies that the curators started in 2014. Their first research results were presented at the exhibition “Propaganda News Machine: Constructing Multiple Realities in The Media” at Flux Gallery in New York City in 2016. TOK continues the project by carrying out research and engaging more artists and other professionals into its activities, beyond Finland and the U.S.

Veits and Bitkina are committed to combining artistic practice with academic research:

“We find it very important to contribute to generating theoretical knowledge on international socially engaged art practices and introduce local contexts and Russian-based artistic and curatorial methods to the international art community. Elaborating shared concepts and terminology dealing with social practices that could be used by various professionals across disciplines as well as collecting and generating knowledge about engagement of art professionals and community members into sociopolitical processes is one of the conference’s main goal.”

Some two weeks remain to submit your abstract for the special issue ‘Women and Tech in Post-Soviet Contexts: Intelligence, Creativity, Transgression.’

For this special issue of Digital Icons: Studies in Russian, Eurasian and Central European New Media we invite contributions on themes, including:

Please send an abstract of 350 words and a short cv to the issue’s editors Saara Ratilainen (saara.ratilainen@helsinki.fi), Mariëlle Wijermars (marielle.wijermars@helsinki.fi) and Justin Wilmes (wilmesj15@ecu.edu) by 15 October 2017. Notification on acceptance will be sent by November 20. The deadline for full articles is 31 January 2018.