On 29 September, Russian Media Lab researcher Olga Dovbysh will participate as a speaker in open podium discussion “How Is European Media Changing: traditional and social media, post-truth and fake news, virtual public sphere, new transparency and right for information” at the public event The Fall Meetings “How is Europe Changing by Informational Technologies?”

END_OF_DOCUMENT_TOKEN_TO_BE_REPLACED

Russian Media Lab researcher Mariëlle Wijermars will give a lecture at Higher School of Economics (Moscow), faculty of Communication, Media and Design on 28 September. During her talk she will explore how the Russian central government employs cultural memory to claim political legitimacy and discredit political opposition. Also Wijermars will present her new book “Memory Politics in Contemporary Russia: Television, Cinema and the State”.

END_OF_DOCUMENT_TOKEN_TO_BE_REPLACED

Elizaveta Gaufman is a Postdoctoral Fellow at the Institute for Intercultural and International Studies at the University of Bremen. Her research focuses on the exploration of verbal and visual enemy images through big data analysis. Dr. Gaufman’s research combines International relations theory with media and cultural studies.

Russian Media Lab asked Dr. Gaufman a couple of questions as she was visiting Aleksanteri Institute for the workshop on Digital Humanities.

Could you tell a bit about your latest project relating to Russian media?

Right now I’m working on a project that is tentatively called “Everyday Foreign Policy”. In the project, I am trying to track how foreign policies are refracted by social network users. They are not just repeating blindly what the government says, but modifying and subverting the narratives they hear.

END_OF_DOCUMENT_TOKEN_TO_BE_REPLACED

“The question of algorithms concerns much of human action and control of one’s own life. Thus it is in the core of the whole idea of humanity.” – Markku Kangaspuro

This week Aleksanteri Institute hosted a workshop (Politics of) Digital Humanities in Eastern European Studies, which brought together an interdisciplinary group of scholars to present their research and to discuss about the future of the ever-digitalizing world of humanities. The presentations dealt with for example challenges and possibilities of digital archives, computational linguistics, memory politics in a digital age, as well as Twitter activity of Kremlin trolls. 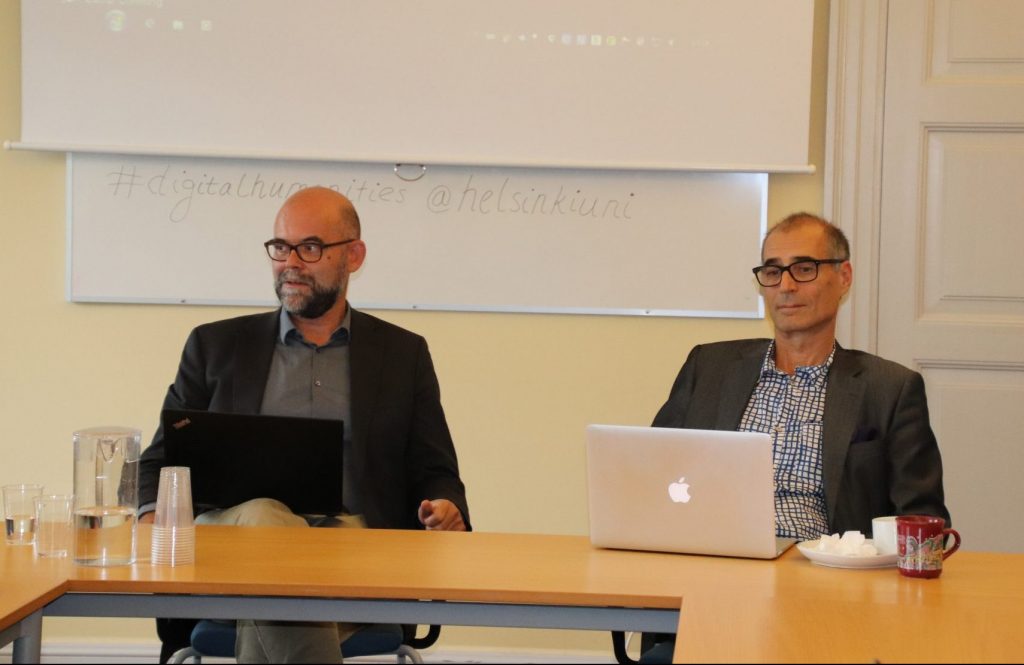 Markku Kangaspuro, Aleksanteri Institute’s director and the host of the event, believes that the progress in the field of digital humanities opens up new possibilities in the research or Russian media as well. For instance Integrum, the vast archive of Russian, Ukrainian and other former Soviet countries’ media sources, has proven to be essential.

What are the potentials of digital humanities in the research of Russian media?

“The potential is great. Besides Integrum, where we have almost the whole Russian media starting from about mid-90’s digitalized in one data base, the media in general is moving to the internet as we speak. This opens up a huge bulk of sources, and in the case we can get these sources for the use of research, we really need new research methods and tools also.

The current situation is not even comparable to the old style media studies, in which one used papery newspapers, listened to radio and maybe read microfilms.”

END_OF_DOCUMENT_TOKEN_TO_BE_REPLACED

From 1 September Olga Dovbysh has joined the Russian Media Lab team as a postdoctoral researcher. She will join the current project on Russian media and freedom of expression.

Can you tell a bit about yourself and your research?

I am from Russia, where I have been working since 2013 at Higher School of Economics in Moscow. Earlier, I graduated from the master’s program “Media management” from The Royal Institute of Technology in Stockholm. In Moscow I’ve been lecturing and running seminars in both English and Russian languages in media studies.

In 2018 I defended my dissertation in sociology. It was an interdisciplinary research lying at the intersection of economic sociology and media studies. I studied how the structure of Russian regional media market changed after the transformation of links between state authorities and media outlets. Firstly, I explored the processes that led to this transformation. Among them are (1) changes in national media policy aimed at further commercialization of media outlets (it was implemented by the repeal of three laws that regulated  economic support of regional mass media); (2) poor development and high disproportion of regional advertising market; (3) desire of regional authorities to control regional media landscape without participation in media capital.
END_OF_DOCUMENT_TOKEN_TO_BE_REPLACED