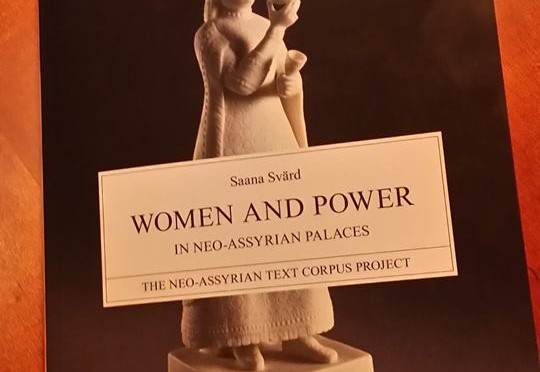 Fresh from the printers! A new book written by CSTT-member Saana Svärd has just appeared in the series State Archives of Assyria Studies.

Power in general and women’s power in particular has been understood mostly in a hierarchical way in earlier research on Mesopotamian women. Hierarchical power structures were important in Mesopotamia, but other kinds of power structures existed as well. This study, which focuses on women in the palaces of the Neo-Assyrian Empire (c. 930-610 BCE), draws attention to heterarchical power relations in which women were engaged in Neo-Assyrian palace milieu. Heterarchical power relations include power relations such as reciprocal power, resistance and persuasion. Although earlier research has certainly been aware of women’s influence in the palaces, this study makes explicit the power concepts employed in previous research and further develops them using the concept of heterarchy. The study is based on primary cuneiform sources and presents a detailed description of of women in Neo-Assyrian palaces. However, it additionally shows that by applying modern theories of power to the study of the ancient texts, one can gain important new insights into the dynamics of ancient society.

The book can be ordered via Eisenbrauns.