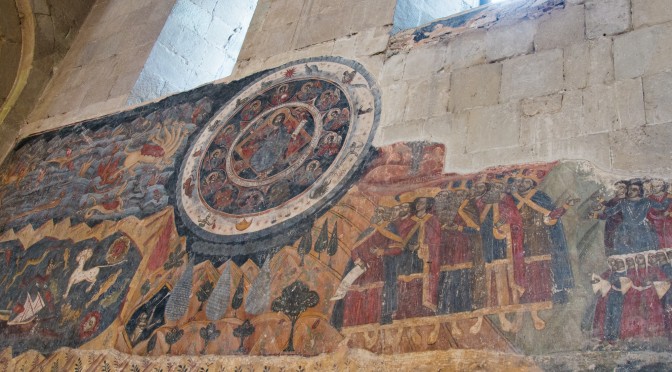 Several members of the CSTT had the opportunity to attend the international symposium “From Scribal Error to Rewriting: How (Sacred) Texts May and May Not Be Changed” in Tbilisi, Georgia, from 30 April to 3 May 2015. The symposium was dedicated to the memory of Septuagint scholar Udo Quast and was a fitting memorial for his important work. We were generously hosted by Anna Kharanauli and many colleagues and students from the Ivane Javakhishvili Tbilisi State University.

That evening, Anna Kharanauli gave us an overview of Georgian Bible manuscripts and the history of the Georgian versions. We were then treated to an excellent exhibition of some of the most important Georgian manuscripts by the National Centre of Manuscripts. Afterwards, we were able to see some old Georgian palimpsests, numerous Hebrew Torah scrolls, and even an interesting unpublished Hebrew codex of the Pentateuch.

On the second day, Eugene Ulrich gave a broad overview of his views of the history of the text of the Hebrew Bible/Old Testament in his paper “From National Literature to Scripture and Beyond.” Peter Gentry then compared the segmentation of a Psalms scroll from Masada and the Aleppo Codex in “The Masada Psalms Fragments and the Rewritten Psalters of Qumran,” proposing a textual connection via the temple establishment. Emanuel Tov presented mostly negative results of a study of whether the Hebrew-language Dead Sea Scrolls reflect revision towards the Masoretic text in his “Revising Translations and Hebrew Texts according to MT.” Our own Anneli Aejmelaeus traced the textual development of the David and Goliath episode in her “Rewriting David and Goliath?” Later that afternoon, Andrés Piquer Otero discussed the significance of daughter versions in his “Creative Philology and Glosses: Secondary Versions of Kingdoms and Lexical Accumulation or Mutation.” And finally, Julio Trebolle Barrera addressed certain “Late Developments in the Textual Tradition of the Greek Antiochean and Old Latin Texts of the Books of Judges and Kings.”

On the last day of sessions, S. Peter Cowe spoke on “The Strata of the Armenian Versions of Esther, Judith, and Tobit and their Distinctive Translation Technique.” Natia Mirotadze discussed her work on complex and interrelated Georgian texts in her paper “Old Georgian Version of the Book of Esther – All in One.” Jean-Marie Auwers analyzed the relationships between the three main versions of Tobit in his “The Mixed Version of the Book of Tobias in its Greek Clothing,” and in a closely related paper Natia Dundua asked about one of these versions, “What May the Georgian Translation of the Book of Tobit Tell about the LXXIII?”

Three researchers from Helsinki finished off the program with short papers. Katja Kujanpää presented some aspects of her research on Paul’s scriptural citations in “Adjusted to the Argument: Paul’s Techniques and Intentions in Modify­ing the Wording of Scriptural Quotations.” I suggested that maintaining a conscious distinction between the genealogical skeleton of source-recipient relationships and the literary significance of the changes can clarify points of agreement and disagreement in the study of textual history in my “Genealogical and Literary Relationships: A Proposal for the Description of Textual History.” And Christian Seppänen evaluated several important variants from his dissertation in his paper “The Hebrew Text of 1 Samuel.”

These papers were quite diverse in scope, covering many different works from many different perspectives. Nevertheless, a heavy overall emphasis on the Greek translations of scripture and their daughter versions permeated the discussions, with the historical books, Esther, and Tobit featuring prominently. I personally found the conference very stimulating and helpful, and I feel I am now in a much better position to appreciate the role the Georgian texts play in the textual history of the Hebrew Bible/Old Testament. Thus, I would say the symposium was a great success. Each of the papers was also simultaneously translated into Georgian, so I hope it was beneficial for the Georgian students in attendance as well. The organizers well deserve congratulations for their accomplishment, and an editorial committee has started making arrangements for publication of a proceedings volume in both English and Georgian that will make the papers available to a wider audience and ensure the lasting impact of the symposium.

But the organizers’ task was far more than academic in nature. Equally as successful, in my opinion, was the cultural and social program. We were repeatedly treated to delicious Georgian cuisine and cultural entertainment and had additional opportunities for guided tours of important cultural landmarks, such as the old city of Tbilisi, the ancient capital Mtskheta, the monastery of David Gareja, and the town of Signagi. For those who were able to stay for the full program, Lika Tov also gave a delightful presentation on women in biblical art. Through these extra-curricular activities, we were able to experience the rich Georgian heritage first-hand and build friendships that will last for years to come. On behalf of the Helsinki contingent, I would once again like to say congratulations and thanks to the organizers for all their work on our behalf.