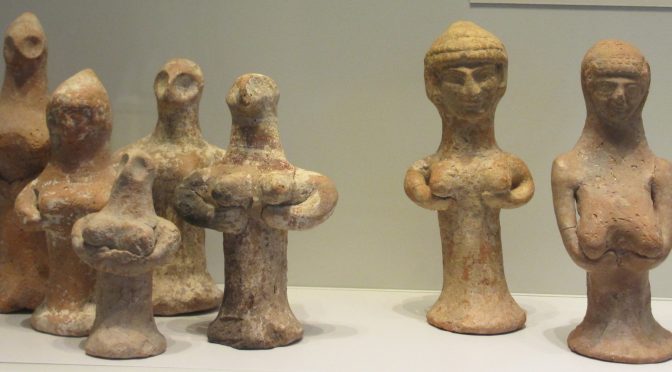 My new book Figurines in Achaemenid Period Yehud attests that figurines were commonly found in post-587/586 Jerusalem. This evidence challenges common assumptions about the rise of monotheism and requires a reconsideration of classifying figurines as idols.

It seems self-evident that monotheists do not use idols. Monotheists believe in one godhead and ‘idols’ is a pejorative term for images wrongly perceived as gods – or maybe intermediaries. If the ‘idols’ are indeed rather seen as intermediaries, however, the question can gain new weight: does monotheism exclude other ‘heavenly beings’?

A strict view on (scriptural) monotheism sticks to the self-evidence of one godhead and no other heavenly beings. This approach is exemplified by Ephraim Stern’s view on the rise of Jewish monotheism. For Stern, the evidence for the establishment of monotheism in Jerusalem (and Yehud, the province of which Jerusalem was part) was his observation that no figurines (commonly interpreted as divine figures) were found in excavations related to periods post-dating the fall of Jerusalem in 587/586. Likewise, finds of terracotta figurines were taken as residual material and attributed to the time of the monarchy (so, pre-587/586). Even the figurines found during the excellent excavation under the direction of Yigal Shiloh in the so-called ‘City of David’ in layers interpreted as post-fall were attributed to earlier times. Although this earlier dating may represent the context for the production of all our known types of figurines, this should not exclude the possibility that there were figurines in post 587/586 Jerusalem.

This conscious exclusion is one of the premises of what I coin as the ‘no figurines → monotheism’ paradigm. In Stern’s version of this paradigm, after the fall of Jerusalem the inhabitants were taken into exile and the country was left empty; later they returned as a reborn nation of pious monotheistic Yahwists.

Figurines in Achaemenid period Yehud provides a detailed study of the terracotta figurines from Yigal Shiloh’s excavation in the ‘City of David’ (especially their contexts in Stratum 9), providing ample evidence for the presence of figurines in post-587/586 Jerusalem (both stratigraphical and typological, i.e. based on where these figurines were found and on how their appearance shows characteristics that connects them with other Achaemenid period ceramics). I further uncover the paradigm’s premises in history, the history of religion, theology, and biblical studies, and particularly reflect on coroplastics (figurine studies).

Having established that there were figurines in post-587/586 Jerusalem makes us return to the question: did monotheists use idols? Addressing the various fields mentioned in relation to the ‘no figurines → monotheism’ paradigm, there are a number of solutions.

First of all, the denial of figurines as evidence for a purported en masse conversion to monotheism can be unmasked as an identity making (and identity marking) ‘myth of the reborn nation’. Second, those who interpret figurines in the shape of a woman (gynemorphic) as a goddess should give account for the horse-and-riders, pieces of furniture, and the many animal figurines, by which the gynemorphic ones are outnumbered. Furthermore, figurines might not have presented idols or there may have been other reasons explaining why and how terracotta figurines could have been combined with the ideas about the one godhead during the rise of Jewish monotheism, possibly, even as vehicles (intermediaries) of the One’s blessings.