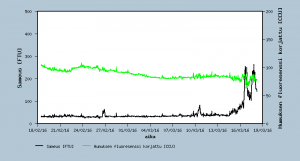 In general, turbidity increases as the water flows faster, and a turbidity value of 1,000 FTU is only likely during intense autumn rains or during the melting of the snow. It is impossible to deduce the streamflow data directly from the sensor results, but the height of the water level provides some indication: the higher the water, the more water is flowing in the Savijoki river.