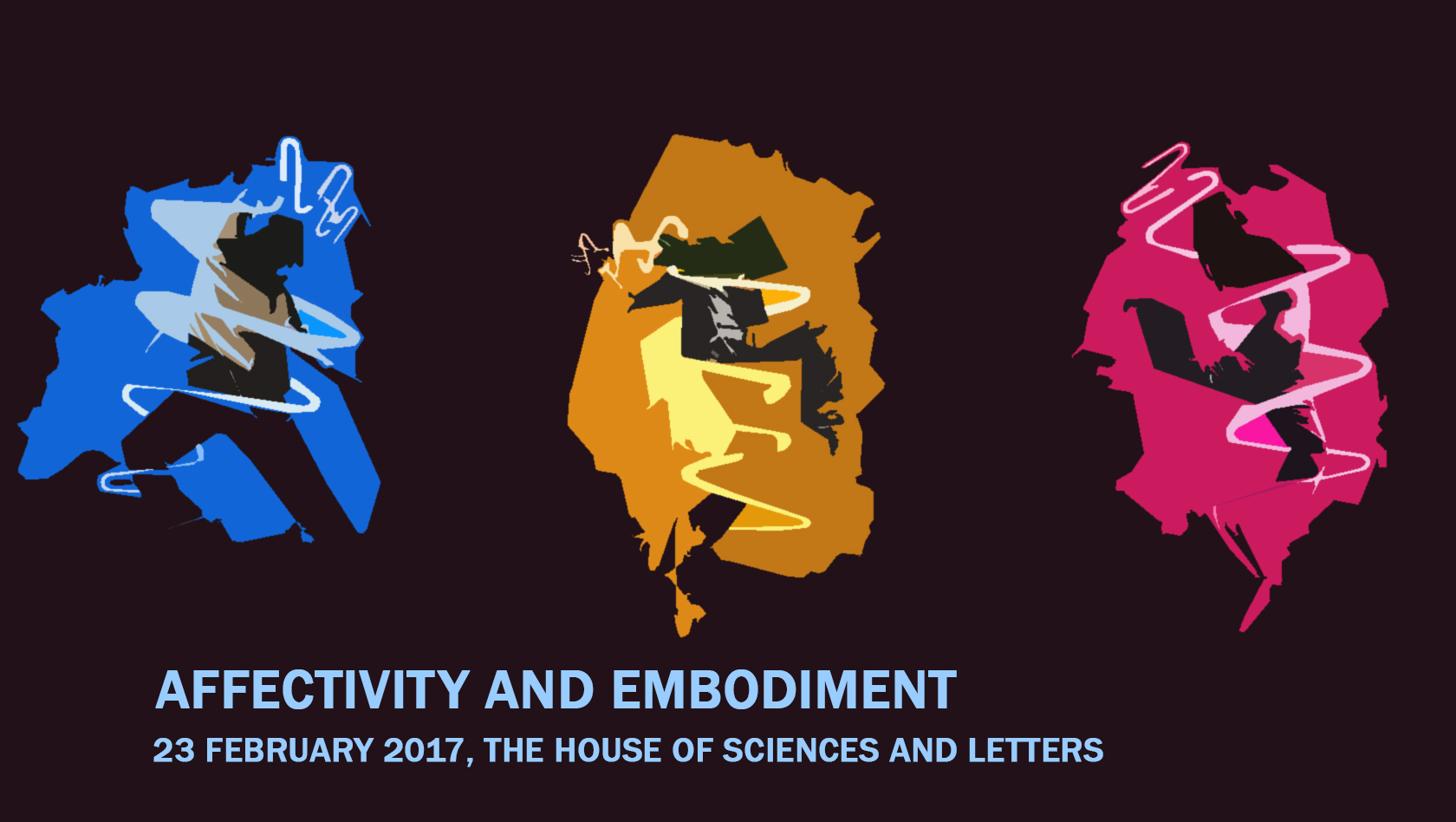 Affectivity and Embodiment: Philosophical Analyses of Experiential Aberrations and Abnormalities

Venue: The House of Sciences and Letters, Kirkkokatu 6, Helsinki

16:30–17:15 Fredrik Westerlund (U of Helsinki/U of Jyväskylä): To See Oneself as Seen by Others: On the Personal and Interpersonal Character of Shame 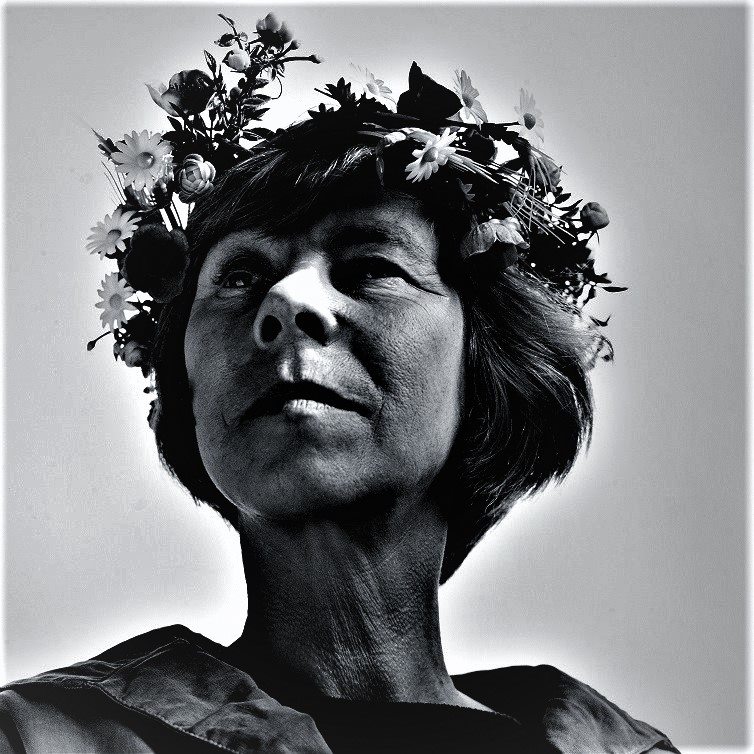 An international symposium organized by the Helsinki Network for Philosophy of Psychiatry, in collaboration with TINT (Centre of Excellence in the Philosophy of the Social Sciences), the Subjectivity, Historicity, Communality Research Network and the Doctoral Programme for Philosophy, Arts and Society.

Our theme, Culture, Extended, Embodied Cognition and Mental Disorders, encompasses cultural issues of mental disorders related to diagnostics, definitions and classifications, as well as phenomenological questions of experience, affectivity and embodiment. The aim of the symposium is to open new horizons for interdisciplinary approaches to mental disorders.

Two days of lectures and discussions among researchers and practitioners take place in the historic Lapinlahti Hospital, which is a former mental institution, among the first modern psychiatric hospitals in Europe.

Registration has ended (June 1st 2016) – if you would like to inquire about extra places, send us an email at psychiatry-symposium[at]helsinki.fi.

13:00-13:30 Marion Godman, What Is Cultural and What Is Bounded about (Some) Psychiatric Syndromes?
13:30-14:00 Samuli Pöyhönen & Petri Ylikoski, Causal Matrix for Addiction

15:45-17:00 Daniel Hutto, A Reconciliation for the Future of Psychiatry: both Folk Psychology and Cognitive Science 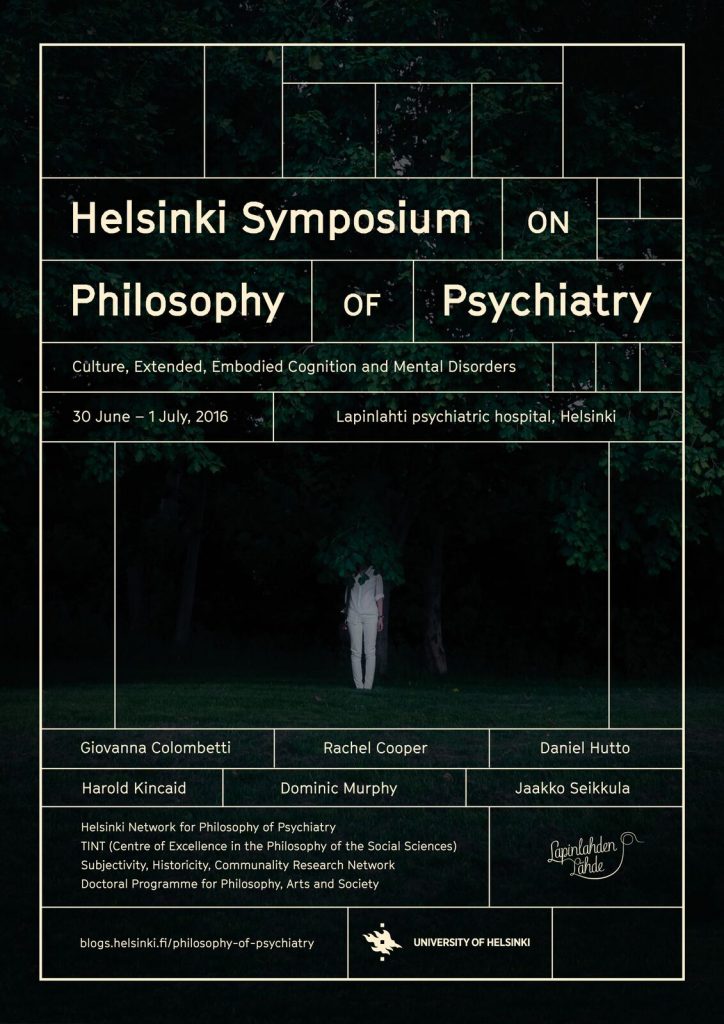 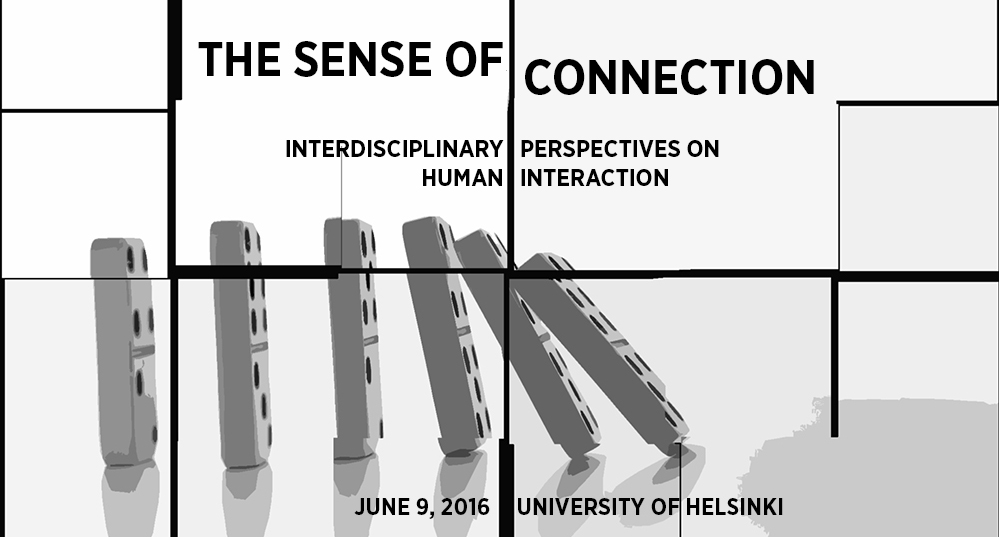 THE SENSE OF CONNECTION
Interdisciplinary perspectives on human interaction

09:15-10:15 Vasudevi Reddy (University of Portsmouth)
“Engagement, the Person and Development”

14:30-15:30 Sara Heinämaa (University of Jyväskylä)
“Self-experience and empathy: On the phenomenological conditions of bodily synchrony”

Description:
In everyday language, we usually talk of a sense of connection when people not only interact with one another, but find their experiential perspectives, insights, or worries either coinciding or at least becoming understood or recognized by one another. Likewise we speak of feelings of “disconnection” when people are not understood by one another, when their emotions and moods are not attuned to or sympathized with, but also when people do not share each other’s religious, political, or ideological world-views. The general psychological insight has been documented by many recent studies: it clearly matters to us whether or not social interaction comes with a sense of connection, and depending on the presence of the latter, interaction is bound to be qualitatively different. To be sure, we do not always seek for a sense of connection – in our daily urban environment we also frequently make efforts in avoiding it. This, however, is yet another proof of the central facilitating and opening role of the sense of connection in social interaction – it is just that we do not always want that.

However, the concept of “connection” is all but clear: it comes in many forms, levels, and registers. On the one hand, interpersonal connection may refer to an experience of cognitive, ideological, or emotional attunement, alignment, or coincidence – to an experience of there being, instead of just two or more individuals, a “we”. On the other hand, the interpersonal connectedness may also refer to non-experiential issues. Recent empirical studies have shown that, in particular circumstances, interpersonal encounters give rise to multi-faceted “synchronization” in the empirically observable physiological and neurological processes of the participants: the perceivable gestures, movements, and prosody of the interacting persons tend to become rhythmically aligned, the responses of the participants’ autonomic nervous systems reportedly tend toward a common pattern, to say nothing of the activation of the participants’ mirror resonance systems.

In short, interpersonal connection proceeds both in experiential and non-experiential registers, and it varies both as for its content and as for its form. The aim of the workshop is to examine and elaborate the structure and meaning of interpersonal connection, its development and emergence, and its consequences in social interaction. These issues will be discussed from various perspectives, paying heed to the following questions in particular:

The conference is free and open to all. Registration beforehand is not needed. Welcome!

The event is sponsored by the Subjectivity, Historicity, Communality network and The Federation for Finnish Learned Societies. 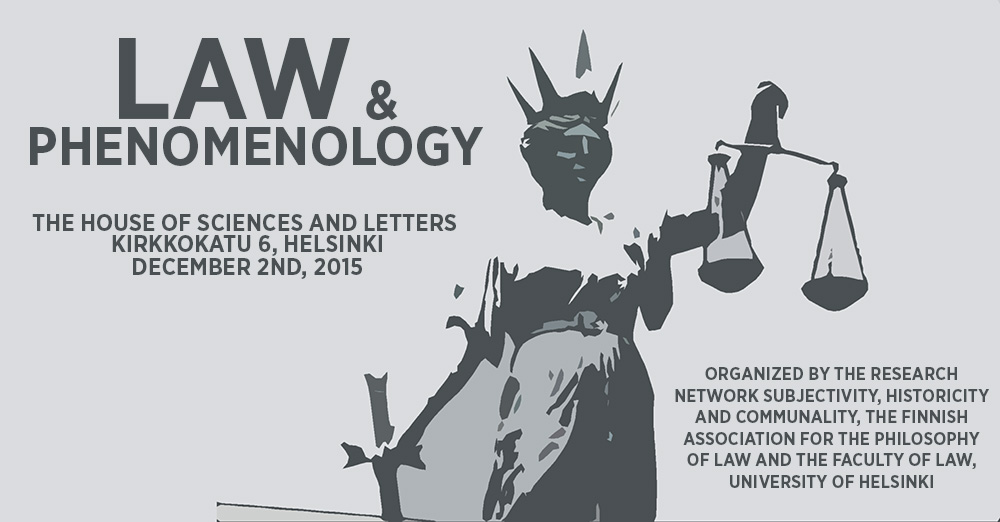 11.45–12.45 Sophie Loidolt (Vienna): Phenomenology, Law, and the Political:
On the Possible Role of Phenomenological Approaches to Subjectivity and Intersubjectivity in Legal Theory

15.15–16.15 Emily Hartz (Southern Denmark):  Law as a Particular Structuring of Subjectivity and World

16.45–17.30 Timo Miettinen (Helsinki):  On the Foundations of the European Economic
Constitution: Ordoliberalism and Phenomenology

17.30–18.15 Hanna Lukkari (Helsinki): Lefort on the Institution of Democracy and Human Rights

The workshop is organized by The Research Network Subjectivity, Historicity and Communality, The Finnish Association for the Philosophy of Law and The Faculty of Law, University of Helsinki.

The aim of this workshop is to discuss the normative structures of personal and interpersonal lives within the framework of contemporary phenomenology and pragmatism.

Venue: The House of Sciences and Letters (Kirkkokatu 6, lecture room 309)

13:45-15:15 Jana Trajtelová (Slovakia): Toward the Meaning of Vocational Identity: Several Phenomenological Observations of the Experience of Vocation in Western Mysticism 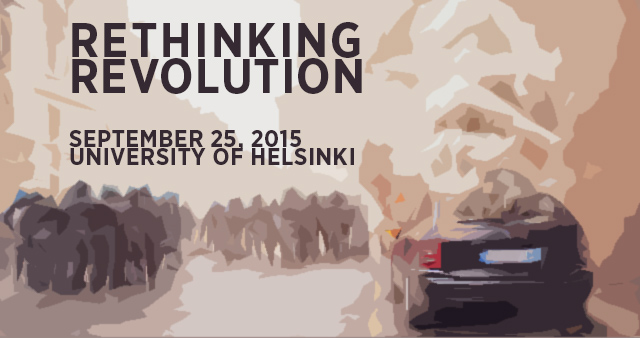 The aim of the symposium is to investigate whether the idea of ‘revolution’ is still politically and theoretically useful today, and if so, what we should understand by it. By combining philosophical, historical and political perspectives on the topic, we aim to generate a broad discussion on the possibilities of social transformation in contemporary societies.

14.00-16.00: The Revolutionary Promises of Marxism, Feminism and Ecology

Kristian Klockars (University of Helsinki): ‘The Democratic Revolution, its Presence and Future’

Organised by the Research  Network Subjectivity, Historicity, and Communality (SHC), University of Helsinki

11:30-12:30 Shinji Hamauzu (Osaka University): On Dialogue in Husserl’s phenomenology of intersubjectivity and psychiatry 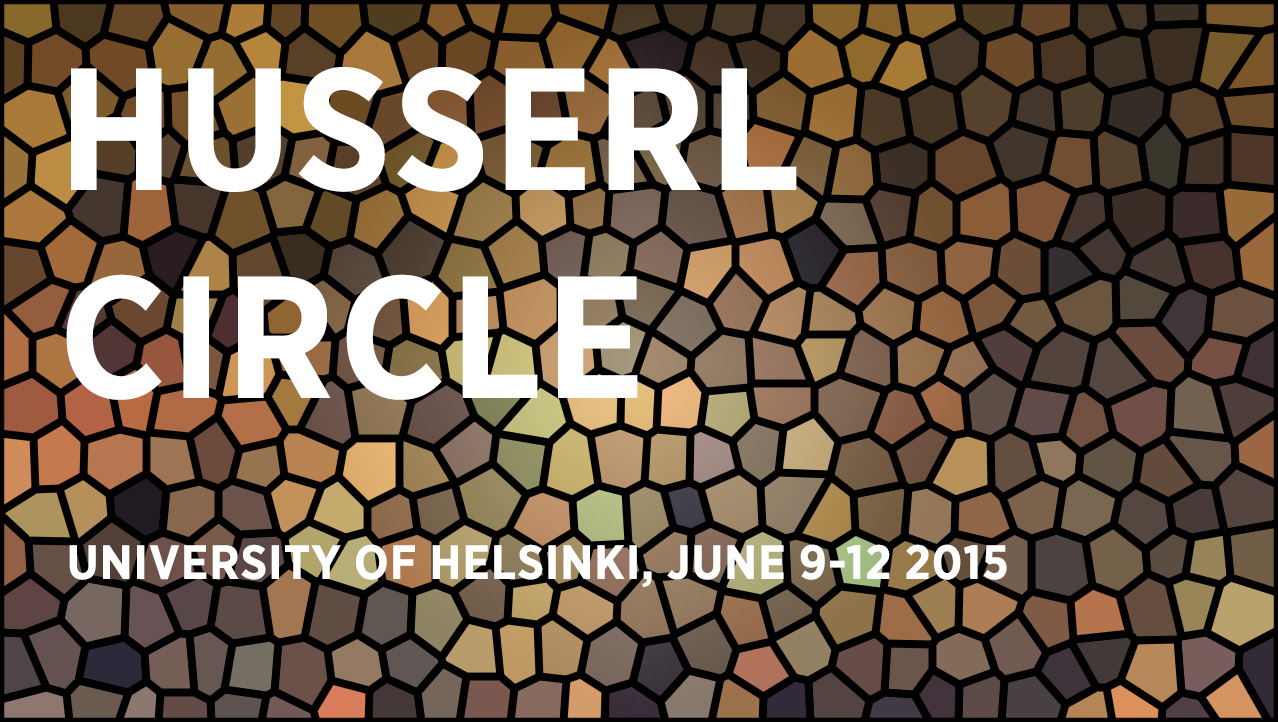 The 46th Annual Meeting of the Husserl Circle

14:00–15:15    Hanna Trindade Gonçalves (University of Minas Gerais): Temporality and Phantasy: The Role of Time in the Constitution of Imaginary Objects

10:15–11:30 Michele Averchi (The Catholic University of America): Appropriation and Assimilation in Communication

15:45–17:00  Lilian Allweiss (Trinity College Dublin): Self-Consciousness without an I

10:15–11:30     Thomas III Byrne (University of Leuven): The Significance of the Hinweistendenz for Husserl’s Philosophy: Expression and Truth

13:45–15:00   Stefania Centrone (University of Oldenburg): On the Shoulders of Leibniz and Bolzano: Early Husserl on the Mathesis Universalis

(Coffee served during the discussion)

Essays on Gödel’s Reception of Leibniz, Husserl, and Brouwer (Springer, 2015).

The Origin of the Logic of Symbolic Mathematics, Edmund Husserl and Jacob Klein (Indiana, 2011).

Modes of Intentionality and the Kantian Background

George Heffernan (Merrimack College): Thinking of Jupiter: An Essay on the Phenomenological Concept of Intentionality in Husserl’s Fifth Logical Investigation

A Conference Organized by The Academy of Finland Research Project

With the Intellectual Traditions in Ethics and Politics Research Group (ITEP),

And The Finnish Association of Researchers

Radical cultural conservatism is one of the most significant, yet also most overlooked, intellectual trends in 20th-century Western political thought. It gained its classic contours in the work of Oswald Spengler, Charles Maurras, Edgar Jung, Ernst Jünger, Carl Schmitt, Martin Heidegger, Julius Evola, Mircea Eliade and others, and is again resurfacing as a salient force in 21st-century discourses. Radical cultural conservatism is not to be neglected if we wish to understand the historical background of late modern political fluctuations, such as the rise of a particular type of far-right ideology. This ideology cannot be traced back to National Socialism and classical fascism alone. Nazism and fascism were largely wiped out in WWII; radical cultural conservatism underwent a crisis, too, but nevertheless survived, first in the European academic community and later in European political life.

Many radical conservatives, such as Eliade, Heidegger, Jünger, and Schmitt as well as their younger followers, continued to write and publish after the war. They inspired new generations of intellectuals and politicians in Europe and also in the United States, where the heritage of radical conservatism is visible in authors such as Leo Strauss, Friedrich A. Hayek, and Hans Morgenthau. In the 1960s, also proponents of the intellectual left adopted ideas developed by radical conservatives at the beginning of the century, first in Italy and subsequently in Germany, France, and the US. Even today, a number of those notions and concepts circulate in the academic world, including the ideas of violence as the origin of order, of conflict as the irreducible fact of human life, of sacrifice as the condition of meaning, and of universalism as a mask for imperialism.

Despite such continuities, the post-WWII heritage of radical cultural conservatism is a relatively unexplored page in modern intellectual history. The aim of the conference is to contribute to the filling of this lacuna and to critically examine the intellectual heritage of the radical conservative ideology by focusing on the ways in which this ideology was preserved, affirmed, reappropriated, and transformed in Western intellectual and political life since the 1940s. This will help to uncover the roots and developmental origins of contemporary radical conservative movements such as the Nouvelle Droite in France and Neo-Eurasianism in Russia, most prominently theorized by Alain de Benoist and Alexander Dugin, respectively.

The conference is open for the public, and there is no admission fee.

Jussi Backman (University of Jyväskylä): The Other Inception of the West: The Postmetaphysical ‘Conservative Revolution’ in Right Heideggerianism

Hjalmar Falk (University of Gothenburg): Epimetheus in the 20th Century: The Symbolism and Ideological Implications of Carl Schmitt’s Marian Katechontism

Timo Pankakoski (University of Jyväskylä): Hans Freyer and the Political Flow of History

Tommaso Beggio (University of Helsinki): Paul Koschaker and his Idea of Europe

Mikko Immanen (University of Helsinki): Adorno Faces Heidegger’s Influence in Frankfurt at the Turn of the 1930s: The Unexamined Frankfurt Discussion as a Sequel to the Epochal Davos Debate

Ville Erkkilä (University of Helsinki): From Seers of History to Deceived Witnesses: Three Historians and their Stories in the Kaleidoscope of the 2nd World War

Silviya Serafimova (Helsinki Collegium for Advanced Studies): How Just Is the War on Terror? The Influence of Carl Schmitt’s Theory of Just War on George W. Bush’s War Politics