With a focus on the regulation of ‘interracial’ relationships and families especially in European migration laws, the symposium will discuss the role of law and lawyers in the development of racial thinking in Europe. The theme will be addressed particularly with a view to socio-legal methodology.

Mixed couples and marriages have always had an ambiguous and often problematic relationship with the law. On one hand, mixed marriages have been seen as a key indicator of sociocultural integration into mainstream society. In terms of the law, this perception has been expressed, for example, as privileged access to citizenship or migration status for immigrant family members of citizens. On the other hand, mixed marriages have been seen as a threat to society and social cohesion. Professor de Hart argues that these contradictory perceptions of mixed relationships have informed the development of migration law over time. Building on literature on the regulation of mixed marriages in law, as well as gender and migration law, she uses the Netherlands as a case study to demonstrate how migration law has been used as a tool to prevent certain types of “undesirable” mixed couples and how this approach has informed Dutch as well as European migration law until today.

All are cordially welcome. Please register to the event by 18 October at https://elomake.helsinki.fi/lomakkeet/83040/lomake.html

The symposium is arranged by the Transnational Muslim Marriages: Wellbeing, Law and Gender project, in conjunction with the Postgraduate Seminar in Constitutional Law and Helsinki Socio-Legal Initiative (HSLI). 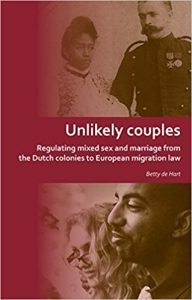 Professor Betty de Hart is a legal scholar and sociologist of law. Her research focuses on legal, historical and empirical research in the national, European and international rules that transnational families encounter, the views behind these rules as well as the impact in the everyday lives of transnational families. It provides new insights into the meanings of nationality, citizenship and belonging and continues the influential academic work done by Dutch scholars on the intersections of family law and migration law. In 2016, Professor de Hart was granted an ERC Consolidator Grant for a research project. Prior to her chair as Professor of Transnational Families and Migration Law at VU Amsterdam, Professor de Hart was Professor of Migration Law at University of Amsterdam and Associate Prof. at Radboud University Nijmegen.